Last updated May 09, 2021
Not to be confused with Charles Macauley (disambiguation).

Charles McAuley (1910–1999) was an Irish painter. He was born on 15 March 1910 at Lubatavish, Glenaan, near Cushendall, the youngest of eight children in a family whose forebears had inhabited the Glens for many generations.

McAuley pursued painting from an early age, in a rural area when farming was one of the main sources of life and income. He went on to become one of Ireland’s most celebrated landscape and figurative painters, his work synonymous with the Glens of Antrim.

A key encounter came in his mid-teens, when the artist James Humbert Craig, who was arts adjudicator at the Feis na nGleann, praised several of his youthful paintings, telling him: "You go ahead with this, and you'll do well." His paintings depicted the rivers, mountains, seascapes and rural life that surrounded him. He briefly studied at both the Belfast School of Art and Glasgow School of Art until he returned to his homeland to which he was utterly devoted. He was a member of the Royal Ulster Academy and the Royal Hibernian Academy.

In 1984 he collaborated with his friend, the poet John Hewitt on The Day of the Corncrake, a publication by the Glens of Antrim Historical Society, in which 25 colour reproductions of his paintings were coupled with 30 poems about the Glens by Hewitt. In a foreword, Hewitt wrote that his "awareness was not merely graphic but demographic. This has made him for me the authentic regional artist, the painter who belongs to and finds his themes in a known place. Nowadays, with the rapid flow of international styles succeeding each other, this is a distinctive title one can seldom confer."

In a BBC television film made in the mid-1980s, he remarked that he might have enjoyed more success if he had made a career in the wider world, but that he certainly would not have been happier: "I've spent my boyhood and manhood in the Glens. . .and I have no desire to leave them until I die."

McAuley died on 30 September 1999. On his death, BBC NI described him as one of Ireland’s greatest colourists and a true gentleman.

The artist’s obituary in The Irish Times noted ‘Charles McAuley could fairly have claimed to be the artist of "the Glens"; for his native knowledge of the local landscape and people brought to the best of his work a special quality of emotion.’

He was the uncle of BBC Northern Ireland broadcasters and writers Tony McAuley and Roisin McAuley.

Many of his works are in private collections. There are several of his paintings in public collections, for example at the Ulster Museum and Queens University Belfast. [2]

Basil Blackshaw was a Northern Irish

Andrew Nicholl RHA was an Irish painter. He was a founding member of the Belfast Association of Artists and in 1847 was elected as an associate member to the Royal Hibernian Academy, becoming a full member in 1860.

John Harold Hewitt, who was born in Belfast, Northern Ireland, was the most significant Belfast poet to emerge before the 1960s generation of Northern Irish poets that included Seamus Heaney, Derek Mahon and Michael Longley. He was appointed the first writer-in-residence at Queen's University Belfast in 1976. His collections include The Day of the Corncrake (1969) and Out of My Time: Poems 1969 to 1974 (1974). He was also made a Freeman of the City of Belfast in 1983, and was awarded honorary doctorates the University of Ulster and Queen's University Belfast. 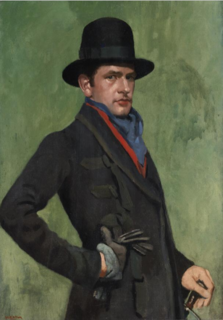 Events during the year 1969 in Northern Ireland.

George Morrow was a cartoonist and book illustrator.

Tony McAuley was a Northern Irish broadcaster, producer and musician.

Roisin McAuley is a BBC Radio Ulster and currently presents Sunday Sequence. She grew up in Cookstown in County Tyrone went to a convent boarding school, and then to Queen's University Belfast to study history.

Raymond PiperHRUA HRHA MUniv was a botanist and an artist.

John Luke was an Irish artist. He was born in Belfast at 4 Lewis Street. The fifth of seven sons and one daughter of James Luke and his wife Sarah, originally from Ahoghill. He attended the Hillman Street National School and in 1920 went to work at the York Street Flax Spinning Company. He went on soon after to become a riveter at the Workman, Clark shipyard and whilst working there he enrolled in evening classes at the Belfast College of Art.

Deborah BrownHRUA is a Northern Irish sculptor. She is well known in Ireland for her pioneering exploration of the medium of fibre glass in the 1960s and has established herself as one of the country's leading sculptors, achieving extensive international acclaim.

Maurice Canning Wilks (1910–1984) was an Irish landscape painter. Born in Belfast in 1910 to a linen designer, he was educated in Belfast at the Malone Public School and attended evening classes at the Belfast College of Art. While attending college he was awarded the Dunville Scholarship allowing him to attend day classes. He went on to exhibit at the Royal Hibernian Academy (RHA) in Dublin where he would one day become an associate member. He was also elected a full member of the Royal Ulster Academy (RUA).

Charles Vincent LambARHAHRUA was an Irish landscape and portrait painter.

Hans Iten was a Swiss artist who specialised in landscape and flower painting in Ireland, and was considered the finest flower painter in Ireland during his lifetime.

Romeo ToogoodARCAHRUA was an Ulster artist and teacher who specialized in landscape painting.

Paul Nietsche was a Ukrainian artist and teacher who emigrated to Ulster in 1936.