Charles Poliquin was born on March 5, 1961 in Ottawa, Ontario, Canada. He earned a master's degree in Exercise Physiology. He started strength training at an early age.

Poliquin began working as a strength coach while he was in graduate school in Canada. He helped popularize German Volume Training. [1] In the late 1990s, Poliquin founded Poliquin Performance, opening the first Poliquin Performance Center in Phoenix, Arizona in 2001, and the Poliquin Strength Institute in East Greenwich, Rhode Island in 2009. [2] Throughout this time he certified coaches in the Poliquin International Certification Program (PICP), which includes a body hormone profiling method, which he invented, called BioSignature Modulation. [3] In September 2013 Poliquin parted ways with Poliquin Performance (now renamed Poliquin Group). [4] He subsequently founded another fitness company called Strength Sensei. [5] He trained numerous Olympic and professional athletes.

Poliquin published articles in peer-reviewed journals of exercise science and strength and conditioning. [6] His training theories were introduced to the bodybuilding community in 1993 through his articles for Muscle Media 2000 magazine, and after 1998 through the online and print versions of Testosterone Magazine [7] (now known as T-Nation). He coined the phrase "the myth of discipline" to suggest that fitness results depend on how motivated a gym-goer is. [8] As a columnist, he penned over 600 articles in numerous publications. [3] Additionally, he is the author of eight books, many of which have been translated into 12 different languages, including Swedish, German, French, Italian, Dutch, and Japanese. His first book, The Poliquin Principles formatted a basic summary of his training methods and provided insight into the training regimens of some of the world's top athletes. Poliquin has a chapter giving advice in Tim Ferriss' book Tools of Titans.

Poliquin died on September 26, 2018 at the age of 57. [9] [10] The cause of death has not been made public. A tribute to Poliquin on a weightlifting website to which he was a contributor indicated he died of a heart attack. [11]

In commenting on Poliquin's death, former client and friend to Poliquin, Gary Roberts, stated, “He lost his father early to a genetic heart disease. He knew he had this in his family. He had a heart attack previously, so he was on top of his nutrition as a result. I knew that was a concern for him.” [12]

Poliquin was survived by his daughter. [13] 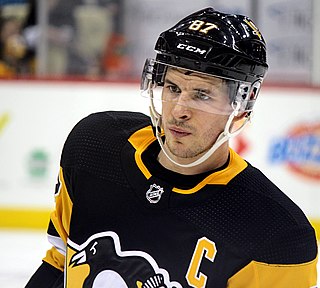 Sidney Patrick Crosby is a Canadian professional ice hockey player and captain of the Pittsburgh Penguins of the National Hockey League (NHL). Nicknamed "Sid the Kid" and dubbed "The Next One", Crosby was selected first overall by the Penguins in the 2005 NHL Entry Draft. Crosby is often considered to be one of the greatest ice hockey players of all time.

Charles Joseph Sylvanus Apps,, was a Canadian professional ice hockey player for the Toronto Maple Leafs from 1936 to 1948, an Olympic pole vaulter and a Conservative Member of Provincial Parliament in Ontario. In 2017 Apps was named one of the '100 Greatest NHL Players' in history.

Alexander Baumann, is a Canadian sports administrator and former competitive swimmer who won two gold medals and set two world records at the 1984 Summer Olympics in Los Angeles. In 2007, he was regarded by the national broadcaster as "the greatest swimmer in Canadian history", as the twin Olympic gold medals were Canada's first in swimming since 1912. 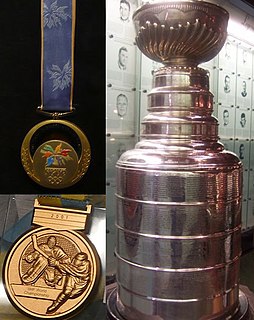 Jonathan Bryan Toews is a Canadian professional ice hockey centre and captain of the Chicago Blackhawks of the National Hockey League (NHL).

The Poliquin Principles: Successful Methods for Strength and Mass Development is a 1997 bodybuilding and strength training book by Charles Poliquin, former strength and conditioning coach of the Canadian Olympic team, and currently the strength coach of several athletes competing in the NHL and other professional and amateur sporting organizations. The book contains a basic formatting of Poliquin's training methods and regimens. Intended for the purpose of helping athletes to improve at their sport and non-athletes to gain muscle mass, it has become a well-known work in its field.

David Le Grys is an English track cyclist, World Masters track champion, and cycling coach who has competed at international level for his country. 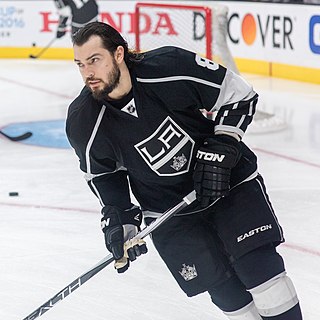 Bruno Pauletto is a physiologist, an author, a business manager, a former coach and a former Canadian track and field athlete. He graduated from CMU and UT and he published several books and articles on exercise physiology.

Luis Manuel Plumahcer is WKF world champion from Venezuela. Aside from winning a world championship in 2004, Luis Plumacher was also a silver medalist in 2006, and in the World Games in 2005. Plumacher was part of the Venezuelan National karate team for 10 years, from 2000 to 2010. During these years he was quite a prolific international medalist. Plumacher kept a very high performance during his competitive years, which made him achieve a reputation as the best fighter on his division, and leading him to 2 World finals, earning him a spot as one of the best world fighters in karate-do competitions.

Penelope Oleksiak is a Canadian competitive swimmer who specializes in the freestyle and butterfly events. Having won 7 medals at the Summer Olympics, she is Canada’s most decorated Olympian. During the 2016 Summer Olympics, she became the first Canadian to win four medals in the same Summer Games and the country's youngest Olympic champion, with a gold in the 100 m freestyle, a silver in the 100 m butterfly, and two bronzes in the women's freestyle relays. With her gold medal win, she became the first athlete born in the 2000s to claim an Olympic gold medal in an individual event.

Lloyd Percival was a Canadian sports coach, author, and fitness guru. Percival wrote The Hockey Handbook, a work which was said to have inspired the development of hockey in the Soviet Union and other nations. He is a member of Canada's Sports Hall of Fame.