Charles Stewart Vane-Tempest-Stewart, 6th Marquess of Londonderry, KG , CB , PC , JP , DL (16 July 1852 – 8 February 1915), styled Viscount Castlereagh between 1872 and 1884, was a British Conservative politician, landowner and benefactor, who served in various capacities in the Conservative administrations of the late 19th and early 20th centuries. After succeeding his father in the marquessate in 1884, he was Lord-Lieutenant of Ireland between 1886 and 1889. He later held office as Postmaster General between 1900 and 1902 and as President of the Board of Education between 1902 and 1905. A supporter of the Protestant causes in Ulster, he was an opponent of Irish Home Rule and one of the instigators of the formal alliance between the Conservative Party and the Liberal Unionists in 1893.

Born Charles Vane-Tempest in London, UK, [1] he was the eldest son of George Vane-Tempest, 5th Marquess of Londonderry, by Mary Cornelia, only daughter of Sir John Edwards, 1st Baronet, who lived primarily at Plas Machynlleth. He was the grandson of the third Marquess and the great-nephew of the second Marquess, better known as the statesman Lord Castlereagh.

To mark his 21st birthday, the people of Machynlleth erected a clock tower in the centre of the town.

George Spencer-Churchill, 8th Duke of Marlborough and his brother Lord Randolph Churchill were his first cousins. [2]

He was educated at Eton, [1] [2] the National University of Ireland [1] and Christ Church, Oxford. He became known by the courtesy title of Viscount Castlereagh when his father succeeded to the marquessate of Londonderry in 1872. In 1885, he assumed the original and additional surname of Stewart by Royal licence. [1] [2]

He was returned to parliament as one of two representatives for Down in 1878, a seat he held until 1884, when he succeeded his father in the marquessate and entered the House of Lords. After the Conservatives came to power in 1886 under Lord Salisbury, Lord Londonderry was sworn of the Privy Council [3] and appointed Lord-Lieutenant of Ireland. [3] This was a time of difficulties in Ireland. Gladstone's first Home Rule Bill had just been rejected by parliament and national feelings ran high in Ireland. According to the Dictionary of National Biography , Londonderry "... filled the viceroyalty with tact and courage, so that when he left Dublin in 1889 the discontent had abated and some measure of prosperity had been restored." [1] He was appointed a Knight of the Garter in 1888 [4] and admitted to the Irish Privy Council in 1892. He opposed Gladstone's second Home Rule Bill in 1893 and presided over the meeting which led to the formal political alliance between the Conservatives and the Liberal Unionists. [1]

From 1895 to 1897, Londonderry was Chairman of the London School Board. He returned to the government in April 1900, when Salisbury made him Postmaster General, and became a member of the cabinet in November of that year. After Arthur Balfour became prime minister in August 1902, Londonderry became President of the Board of Education. [5] [6] In this role he oversaw the Education Act 1902. Between 1903 and 1905, he was also Lord President of the Council. The Unionists fell in December 1905, and Londonderry subsequently focused mostly on Irish affairs. He was one of the "scuttlers" (as Leo Maxse termed them) who did not vote against the Parliament Act 1911. As president of the Ulster Unionist council, he opposed the third Home Rule Bill proposed by the Liberal government in 1912 and was the second signatory to the Ulster Covenant after Sir Edward Carson. [1]

On 24 June 1869, just before his 17th birthday, he was commissioned as Major in the 2nd (Seaham) Durham Artillery Volunteer Corps a part-time unit commanded by his father and recruited mainly from the family's Seaham Colliery. (On the same day his 15-year-old younger brother was commissioned as a 1st Lieutenant; their uncle also served in the unit.) [7] [8] [9] He succeeded his father in command in 1876 and was still in command of the unit when it transferred to the Territorial Force in 1908 as the 3rd Northumbrian (County of Durham) Brigade, Royal Field Artillery, of which he became Honorary Colonel on 7 December 1910. [8] He was also appointed to the Honorary Colonelcy of the 3rd (Militia) Battalion of the Royal Irish Rifles on 26 March 1902. [10]

As a large coal-owner in County Durham, he played a major role there. In 1910, he was Mayor of Durham, [2] and he received an honorary degree (D.C.L., 1901) from the University of Durham in recognition of his public services. [11]

He was a great benefactor, patron of agriculture and race-horse owner. King Edward VII was a guest at Londonderry's County Durham seat Wynyard Park on five occasions. [1] In 1903 Londonderry was appointed a Knight Grand Cross of the Royal Victorian Order (GCVO). [2]

He married Lady Theresa Susey Helen Talbot, daughter of Charles Chetwynd-Talbot, 19th Earl of Shrewsbury, at the private chapel of Alton Hall in 1875. Like her husband, she was a leading Unionist campaigner, and President of the Ulster Women's Unionist Council. [12]

They had two sons and one daughter. The second son, Lord Charles Stewart Reginald Vane-Tempest-Stewart, died in October 1899, aged 19. The daughter, Lady Helen, married the 6th Earl of Ilchester. [2]

Lady Londonderry had an affair with Harry Cust. Another of Cust's lovers, Gwladys, Countess de Grey, found Lady Londonderry's passionate love letters to Cust in his bedroom. In an act of jealousy and vengeance, she had a servant deliver those letters to Lord Londonderry. Thus, he found out about the liaison and may have wanted to divorce his wife initially. However, the matrons of society intervened and convinced him to withdraw from his divorce plans. Instead, it has been alleged, as a form of punishment to his wife for her past adultery, he never spoke to her again in private, only in public and, supposedly, he even refused her entrance to his bedroom at the time of his death.

Londonderry died of pneumonia at Wynyard Park, County Durham, [1] in February 1915, aged 62, with his wife at his bedside. In a letter dated 13 February 1915 (at Durham County Record Office, in the Londonderry Archive) written from Wynyard Park, the grieving Lady Londonderry wrote to her grandson Robin, Lord Stewart, at his school, as follows: "I was so glad to get your darling little letter...You can imagine what it is for me to lose Darling Pa ["Pa" was Robin's name for his grandfather] - you are so understanding you will know, and you will remember what companions he and I always were. I am so glad that the last time you saw him we had those two happy dinners when you and Maureen [Robin's sister] made us laugh so and you saw how bright he was. He caught a little cold, but we did not think anything about it, and afterwards I sent for the doctor and he went to bed and then took pneumonia. On Sunday at lunch time I saw that he was very very ill and he died at 9.30 on Monday morning. I never left him all the time and until the very last he heard my voice. He moved and opened his eyes even after the doctors thought he was insensible...I should so have loved you to have been in the Chapel Wednesday night and Thursday. The services were most beautiful and we had all darling Pa's favourite hymns as you will see from the enclosed leaflets...I want you so much never to forget Darling Pa...I am going to direct this letter to you for the last time in your old name" [Robin had now become Viscount Castlereagh, and ceased using his former courtesy title of Lord Stewart]. The 6th Marquess of Londonderry was succeeded by his elder and only surviving son, Charles. The Marchioness of Londonderry died in March 1919. [2] 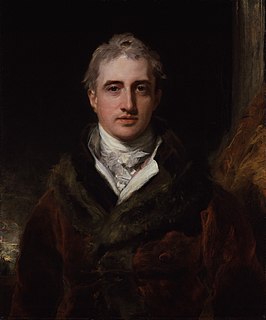 Robert Stewart, 2nd Marquess of Londonderry,, usually known as Lord Castlereagh, derived from the courtesy title Viscount Castlereagh by which he was styled from 1796 to 1821, was an Anglo-Irish statesman. As British Foreign Secretary, from 1812 he was central to the management of the coalition that defeated Napoleon. He was the principal British diplomat at the Congress of Vienna. Castlereagh was also leader of the British House of Commons in the Liverpool government from 1812 until his suicide. Early in his career, as Chief Secretary for Ireland, he was involved in putting down the Irish Rebellion of 1798 and was instrumental in securing the passage of the Irish Act of Union of 1800. 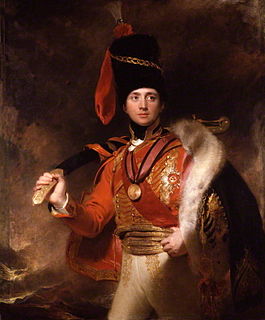 Charles William Vane, 3rd Marquess of Londonderry,, was an Irish soldier in the British army, a politician, and a nobleman. As a soldier he fought in the French Revolutionary Wars, in the suppression of the Irish Rebellion of 1798, and in the Napoleonic wars. He excelled as a cavalry commander on the Iberian Peninsula under John Moore and Arthur Wellesley.

Charles Stewart Henry Vane-Tempest-Stewart, 7th Marquess of Londonderry,, styled Lord Stewart until 1884 and Viscount Castlereagh between 1884 and 1915, was a British peer and politician. He is best remembered for his tenure as Secretary of State for Air in the 1930s and for his 'understanding' of Nazi Germany in the 1930s. In 1935 he was removed from the Air Ministry but retained in the Cabinet as Lord Privy Seal and Leader of the House of Lords.

Frederick William Robert Stewart, 4th Marquess of Londonderry (1805–1872), styled Viscount Castlereagh from 1822 to 1854, was a British nobleman and Tory politician. He was briefly Vice-Chamberlain of the Household under Sir Robert Peel between December 1834 and April 1835.

This is a list of people who have served as Lord Lieutenant of Durham. 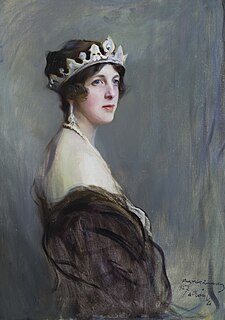 Edith Helen Vane-Tempest-Stewart, Marchioness of Londonderry, DBE was a noted and influential society hostess in the United Kingdom between World War I and World War II, a friend of the first Labour prime minister, Ramsay MacDonald. She was a noted gardener and a writer and editor of the works of others.

Mount Stewart is a 19th-century house and garden in County Down, Northern Ireland, owned by the National Trust. Situated on the east shore of Strangford Lough, a few miles outside the town of Newtownards and near Greyabbey, it was the Irish seat of the Vane-Tempest-Stewart family, Marquesses of Londonderry. The house and its contents reflect the history of the Vane-Tempest-Stewart family, who played a leading role in British and Irish social and political life. 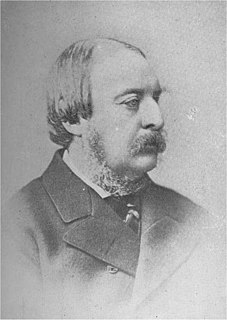 George Henry Robert Charles William Vane-Tempest, 5th Marquess of Londonderry, KP, styled Viscount Seaham between 1823 and 1854 and known as The Earl Vane between 1854 and 1872, was a British aristocrat, businessman, diplomat and Conservative politician.

Wynyard Park, sometimes known as Wynyard Hall is a large English country house in County Durham. The house was the English family seat of the Vane-Tempest-Stewart family, Marquesses of Londonderry, an Anglo-Irish aristocratic dynasty, until it was sold in the 1980s.

Plas Machynlleth is the former Welsh residence of the Marquesses of Londonderry. It is situated in the market town of Machynlleth in Powys, Wales. It was brought into the family following the 1846 marriage of the then Viscount Seaham to Mary Cornelia Edwards, who inherited it on the death of her father, Sir John Edwards, in 1850. Sir John had extended and renamed the house. It is a Grade II* listed building.

Sir Henry Vane-Tempest, 2nd Baronet was a British politician. In early life his name was Henry Vane. He changed his name to Vane-Tempest when he inherited from his uncle John Tempest, Jr. in 1793.

Vane is a surname. Notable people with the surname include:

Frances Anne Vane, Marchioness of Londonderry was a wealthy English heiress and noblewoman. She was the daughter of Sir Henry Vane-Tempest, 2nd Baronet. She married Charles William Stewart, 1st Baron Stewart. She became a marchioness in 1822 when Charles succeeded his half-brother as 3rd Marquess of Londonderry.

Nigel Sydney Augustine Harrison was an English cricketer. Harrison was a right-handed batsman who bowled right-arm fast-medium. He was born at Maidstone, Kent, and was educated at Haileybury.