He was born at Killough, County Down, Ireland, a descendant of the Russells who held the Barony of Killough of Quoniamstown and Ballystrew.

He received his early education at Drogheda grammar school (where his mother hailed from) and at Downpatrick, after which he entered St Patrick's College, Maynooth in 1826. (St. Patrick's College is now formally the Pontifical University and National Seminary of Ireland, but is better known simply as Maynooth College. As such, it shares a campus and works in close cooperation with the National University of Ireland, Maynooth.) He was ordained on 13 June 1835, and became a professor of humanities.

In 1842 he was chosen by Pope Gregory XVI to be the first Vicar Apostolic of Ceylon (now Sri Lanka), but he refused the dignity as also the Bishopric of Down and the Archbishopric of Armagh. Three years later he returned to Maynooth as professor of ecclesiastical history.

Having published his translation of Gottfried Wilhelm von Leibniz's System of Theology in 1850, he was occupied on his Life of Cardinal Mezzofanti which appeared in 1858. [1] In 1857 he succeeded the Rev. Dr. Laurence F. Renehan as President of St. Patrick's, Maynooth. Cardinal Nicholas Wiseman corresponded often with Russell and when the Cardinal visited Ireland in 1858 he paid a visit to Maynooth. In a memoir written later the Cardinal wrote "the professors and the students, over five hundred in number, in full academic costume, were in waiting with the college grounds, and accorded to their illustrious visitor a thoroughly Irish welcome". [2] There are original letters from Cardinal Wiseman to Dr. Russell in the archives of St. Patrick's College, Maynooth. [3]

In 1869 Dr. Russell's antiquarian learning caused him to be appointed a member of the Historical Manuscripts Commission and in that capacity he acted as joint editor (with John Patrick Prendergast) of the eight-volume Report on the Carte Manuscripts in the Bodleian Library (1871) and the Calendar of Irish State Papers during the reign of James I (4 vols., 1872–1877).

He was also a frequent contributor to the Dublin Review which for thirty years he enriched by various papers, often writing more than one for the same number. The last of these were the two masterly articles on the sonnet (1876–1877). He wrote many articles for Chambers's Encyclopaedia , and two - "Palimpsests" and "Papyrus" - for the Encyclopædia Britannica . He contributed other magazines, such as the Edinburgh Review , the Month , and the Irish Monthly . A popular work was his translation of Canon Schmid's Tales for the Young first published in 1846.

He died in Dublin, aged 67, from unknown causes and is buried in the College Cemetery which he had repaired and enhanced in his time as College President [4] [5]

In 1983 the distinguished ecclesiastical historian Dr. Ambrose MacAuley published his biography of Russell. [6]

Cardinals Nicholas Wiseman - the first Archbishop of Westminster - and John Henry Newman alike counted him as an intimate friend, and the latter wrote of him: "He had perhaps more to do with my conversion than any one else". Dr. Russell lived to witness the early success of his nephew Charles Russell who in his uncle's lifetime was made a QC but who would subsequently become Lord Chief Justice of England.

Nicholas Patrick Stephen Wiseman was a Cardinal of the Catholic Church who became the first Archbishop of Westminster upon the re-establishment of the Catholic hierarchy in England and Wales in 1850. 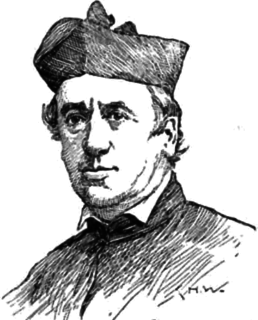 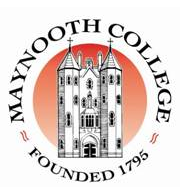 St Patrick's Pontifical University, Maynooth, is the "National Seminary for Ireland", and a pontifical university, located in the town of Maynooth, 24 km (15 mi) from Dublin, Ireland. 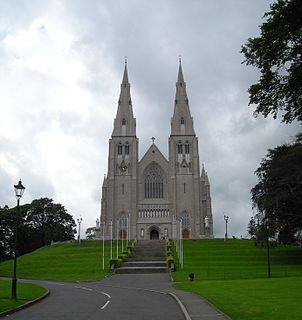 Micheál Ledwith is a former Catholic priest of the Diocese of Ferns in County Wexford from 1967 to 2005.

William Maziere Brady (1825–1894) was an Irish priest, ecclesiastical historian and journalist who converted to Roman Catholicism from Anglicanism. 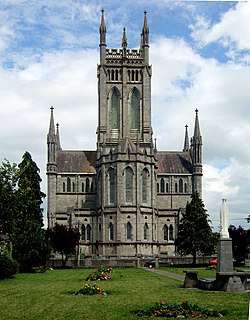 The Roman Catholic Diocese of Ossory is a Roman Catholic diocese in eastern Ireland. It is one of three suffragan dioceses in the ecclesiastical province of the Metropolitan Archbishop of Dublin. Most recently it was led by Dermot Farrell, who was appointed on 3 January 2018 and ordained bishop on 11 March 2018. He was appointed Archbishop of Dublin on 29 December 2020 and remained Apostolic Administrator of Ossory until 2 February 2021.

Laurence F. Renehan (1797–1857) was an Irish historian, author, administrator and Roman Catholic priest who served as president of St Patrick's College, Maynooth from 1845 to 1857. 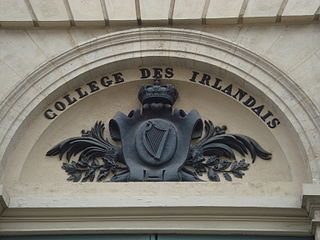 The Irish College in Paris was for three centuries a major Roman Catholic educational establishment for Irish students. It was founded in the late 16th century, and closed down by the French government in the early 20th century. From 1945 to 1997, the Polish seminary in Paris was housed in the building. It is now an Irish cultural centre, the Centre Culturel Irlandais. 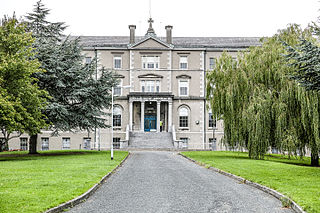 Holy Cross College, located in Clonliffe Road, Drumcondra was founded in 1854 as the Catholic diocesan seminary for Dublin by Cardinal Paul Cullen (1803–78) 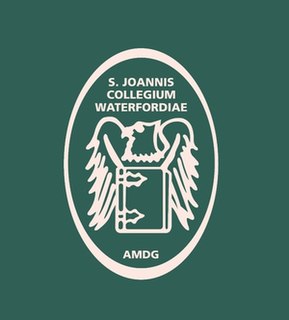 St. John's College was a Catholic seminary founded in 1807 for the diocese of Waterford and Lismore.

Irish College at Lisbon or St. Patrick's College, Lisbon was set up during the Penal Times, by a group of Irish Jesuits, supported by a number of Portuguese Nobles, in Lisbon.

James Joseph McCarthy was an Irish architect famous for his design of ecclesiastical buildings. McCarthy was born in Dublin, Ireland on 6 January 1817. His parents were from County Kerry. He was educated by the Christian Brothers in Richmond St., and went on to study architecture at the Royal Dublin Society School. He was a follower of the style of the architect Pugin and Gothic Revival. 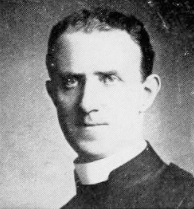 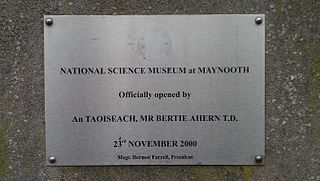 The National Science and Ecclesiology Museum at Maynooth is a science museum and museum of ecclesiology, located on the joint campus of St Patrick's College, Maynooth and Maynooth University, Ireland. It is an institution of the college, having begun as an ecclesiological museum. 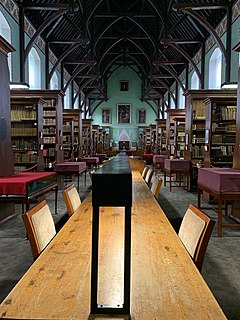 The Russell Library is situated in Maynooth, County Kildare, in the Republic of Ireland on the campus of St. Patrick's College. It houses the historical collections of St. Patrick’s College, Maynooth, which was established in 1795. The Russell Library is home to significant collections, manuscripts, and archival holdings, notably the Salamanca archive documents which date back to 1751. There is also a collection of incunabula such as a 1482 volume set on moveable type and an illuminated collection of medieval and Gaelic manuscripts. There are over 2,500 bibles, which includes the 493 long bibles also. The Russell Library was the main library in Maynooth until the opening of the John Paul II Library in 1981 which is now the main library for both students of Maynooth University and St. Patrick's College. Access to the Russell Library is by appointment only. However, during the summer the library holds exhibitions which are open to the public. The exhibitions typically last from the end of June to the end of July.