He was born in Paris, and was educated at the Collège de Sainte-Barbe and the Collège du Plessis; at the latter he remained as a teacher until he obtained the chair of rhetoric in the Collège des Grassins. In 1748 he was admitted as a member of the Academy of Inscriptions, and in 1752 he was nominated professor of Latin eloquence at the Collège de France. From 1755 onward, he held the office of perpetual secretary to the Academy of Inscriptions, in which capacity he edited fifteen volumes (from the 25th to the 39th inclusive) of the Histoire of that institution. [1]

He is best remembered as the author of Histoire du Bas-Empire, en commençant à Constantin le Grand, in 22 volumes (Paris, 1756–1779). This is a continuation of Charles Rollin's Histoire Romaine and JBL Crevier's Histoire des empereurs. Its usefulness arises entirely from the fact of its being a faithful resume of the Byzantine historians. Five volumes were added by H.-P. Ameilhon (1781–1811), which brought the work down to the fall of Constantinople. A later edition was produced by Antoine-Jean Saint-Martin and afterwards of Marie-Félicité Brosset. [2]

Pierre-Louis Ginguené was a French author.

Marc Fumaroli, is a French historian and essayist. 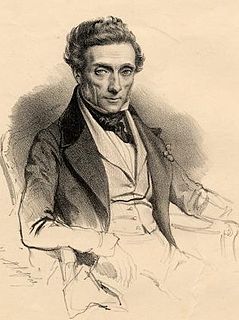 Claude-François Ménestrier was a French heraldist, a member of the Society of Jesus [Jesuit], and attendant of the royal court.

Antoine Thomas was a French linguist. He is known for his work with Adolphe Hatzfeld and Arsène Darmesteter, on the Dictionnaire général de la langue française du commencement du XVIIe siècle à nos jours, which was issued in parts from 1890 to 1900. He supplied etymological notes.

Joseph Naudet was a French historian who was a native of Paris.

Michel de Marolles, known as the abbé de Marolles, was a French churchman and translator, known for his collection of old master prints. He became a monk in 1610 and later was abbot of Villeloin (1626–1674). He was the author of many translations of Latin poets and was part of many salons, notably that of Madeleine de Scudéry. He is best known for having collected 123,000 prints - this acquisition is considered the foundation of the cabinet of prints in the royal library, though it was only constituted as a department in 1720.

Jean-Baptiste Benoît Eyriès was a French geographer, author and translator, best remembered in the English speaking world for his translation of German ghost stories Fantasmagoriana, published anonymously in 1812, which inspired Mary Shelley and John William Polidori to write Frankenstein and The Vampyre respectively. He was one of the founding members of the Société de Géographie, a member of the Société Asiatique, admitted to the Académie des Inscriptions et Belles-Lettres, awarded the Legion of Honour, elected a Foreign Honorary Member of the American Academy of Arts and Sciences in 1841, and has a street named after him in Le Havre and a mountain near Humboldt Bay.

Jean-Charles Darmon is a French literary critic born in 1961.

Antoine-François Le Bailly, was a French librettist and fabulist.

Jean Saas was an 18th-century French historian and bibliographer.

Michel Parisse was a French historian who specialized in medieval studies. He was a professor emeritus at the University of Paris 1 Pantheon-Sorbonne.