Last updated May 04, 2021
Australian cricketer
Not to be confused with Charles Kellaway.

Playing on both side of the First World War, he travelled to England in 1911/12 to play against the team captained by Plum Warner. In that series, he took a total of only 6 wickets at 41.50. However, on his return in the Triangular tournament of 1912 he was more successful and made 360 runs in six Tests, with 114 at Manchester and 102 at Lord's, both against South Africa. He also had the best bowling of 5/33 in an innings.

He served as a Captain in the Australian Army and after the war remained in England and was the first captain of the Australian Imperial Force Touring XI until he was removed following a dispute.

He died after a long illness in Lindfield, New South Wales. 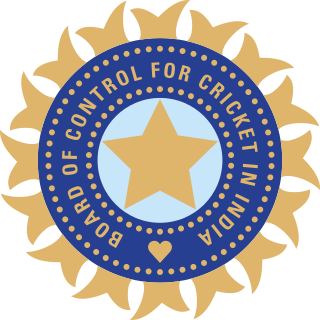 The India men's national cricket team, also known as Team India and Men in Blue, is governed by the Board of Control for Cricket in India (BCCI), and is a Full Member of the International Cricket Council (ICC) with Test, One-Day International (ODI) and Twenty20 International (T20I) status. 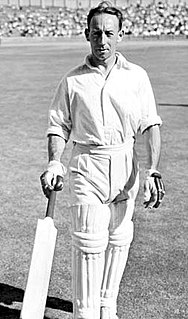 Arthur Lindsay Hassett was a cricketer who played for Victoria and Australia. The diminutive Hassett was an elegant middle-order batsman, described by Wisden as, "... a master of nearly every stroke ... his superb timing, nimble footwork and strong wrists enabled him to make batting look a simple matter". His sporting career at school singled him out as a precocious talent, but he took a number of seasons to secure a regular place in first-class cricket and initially struggled to make large scores. Selected for the 1938 tour of England with only one first-class century to his name, Hassett established himself with three consecutive first-class tons at the start of the campaign. Although he struggled in the Tests, he played a crucial role in Australia's win in the Fourth Test, with a composed display in the run-chase which sealed the retention of the Ashes. Upon returning to Australia, he distinguished himself in domestic cricket with a series of high scores, becoming the only player to score two centuries in a match against Bill O'Reilly—widely regarded as the best bowler in the world. 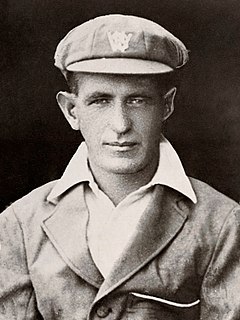 The 1912 Triangular Tournament was a Test cricket competition played between Australia, England and South Africa, the only Test-playing nations at the time. 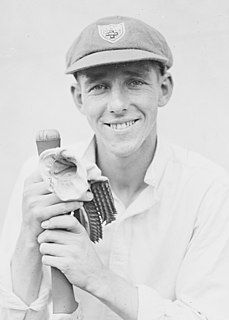 Archibald Jackson, occasionally known as Archibald Alexander Jackson, was an Australian international cricketer who played eight Test matches as a specialist batsman between 1929 and 1931. A teenage prodigy, he played first grade cricket at only 15 years of age and was selected for New South Wales at 17. In 1929, aged 19, Jackson made his Test debut against England, scoring 164 runs in the first innings to become the youngest player to score a Test century.

Arthur Dudley Nourse was a South African Test cricketer. Primarily a batsman, he was captain of the South African team from 1948 to 1951. 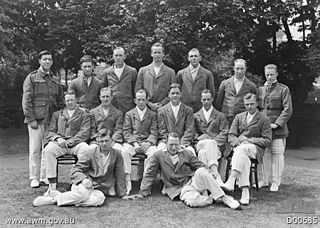 When the First World War ended in November 1918, thousands of Australian servicemen were in Europe as members of the First Australian Imperial Force (AIF) and many remained until the spring of 1919. In England, a new first-class cricket season was planned, the first since 1914, and an idea that came to fruition was the formation of an Australian touring side made up of servicemen. Agreement was reached with the Australian Corps HQ in London, commanded by Field Marshal William Birdwood, 1st Baron Birdwood, and the Australian Imperial Force Touring XI was formed, initially under the captaincy of pre-war Test player Charlie Kelleway. Kelleway departed after only six matches following a dispute about the fixtures list. A players' meeting elected future Test player Herbie Collins as team captain for the remainder of the tour, despite the fact that Collins' military rank was lance corporal and there were seven officers in the party. The bulk of the team remained intact for nearly nine months from May 1919, playing 33 matches in Great Britain, ten in South Africa on their way home and then another three in Australia itself before disbanding in February 1920. Of the 46 matches, 39 are adjudged first-class and the team had only four defeats, all of these in England. The players lived on their army pay and all profits from gate money went to an AIF Sports Control Board.

The English cricket team in Australia in 1911–12 was led by Plum Warner, but Johnny Douglas took over the captaincy for all five Test matches when Warner fell ill early in the tour. Despite losing the first Test at Sydney, a side which included Jack Hobbs, Frank Woolley, Sydney Barnes and Wilfred Rhodes hit back to win the remaining four Tests. They thus regained The Ashes.

Colin "Col" Windon, was a rugby union player and soldier who captained Australia – the Wallabies – in two Test matches in 1951. By age 18 Windon was playing at flanker for his club Randwick in Sydney's Shute Shield. After serving with the Second Australian Imperial Force in the Pacific Theatre during the Second World War, Windon resumed his rugby career in 1946. He was first selected for Australia for their tour of New Zealand that year. Despite the Wallabies losing both their Tests on tour, Windon impressed with his play.

Herbert Sutcliffe made his first-class debut for Yorkshire in the 1919 season, during which he and Percy Holmes developed one of county cricket's greatest opening partnerships. After initial success, Sutcliffe had a couple of relatively lean seasons before fulfilling his promise in 1922. In 1924, he made his debut for England in Test cricket and formed a famous Test opening partnership with Jack Hobbs. He enjoyed personal success on the 1924–25 MCC tour of Australia, although England lost the Test series 4–1 to Australia. In the 1926 Ashes series against Australia, Hobbs and Sutcliffe produced a series-winning partnership at The Oval in difficult batting conditions. By the end of the 1927 season, Sutcliffe was one of the world's premier cricketers and was being considered, although he was a professional, for the captaincy of Yorkshire.