O'Donnell was a Philadelphia native. He began his career as a teenager at WCHA in Chambersburg, Pennsylvania. In 1956, he worked as program director at WHAT, a 250-watt R&B station in Philadelphia, where he discovered and launched the career of future Philadelphia radio personality Hy Lit. When WIBG became top-40 in 1957, O'Donnell was named news director. In 1958, he became the sidekick of Dick Clark on WFIL-TV's afternoon dance program, American Bandstand . [2]

This led to several stints as a disc jockey on Los Angeles radio (most notably on Pasadena station KRLA, 1964–67), and later as news anchorman and staff announcer on Los Angeles television station KCOP-TV, where he performed double duty and often introduced his own newscasts with the self-referential cue "and now Charlie O'Donnell with the news." Additionally, Barry & Enright Productions taped The Joker's Wild and Tic-Tac-Dough at KCOP during its initial syndicated runs, which O'Donnell announced for. It was also in this period that he voiced the newscaster on the Simon & Garfunkel recording "7 O'Clock News/Silent Night."

He made a full-time career as an announcer on many television shows throughout the decades, with such series as The Joker's Wild , Tic-Tac-Dough , Bullseye and The $100,000 Pyramid (again working with Dick Clark). He also served as announcer for the American Music Awards , the Emmy Awards , and the Academy Awards . [1]

Wheel of Fortune and other game shows

O'Donnell was perhaps best known as the announcer of the game show Wheel of Fortune . He filled this role from 1975 to 1980 (including two unaired pilots hosted by 77 Sunset Strip actor Edd Byrnes), acted as a substitute for his successor, Jack Clark, and returned to the show permanently several months after Clark's death in 1988. Between Clark's death and O'Donnell's return, disc jockey M.G. Kelly announced the show for most of its 1988-89 season. O'Donnell was also the announcer for music variety series Dance Fever from 1980 to 1987.

He and John Harlan filled in for Rod Roddy on different occasions on Press Your Luck . He also announced on the game show version of Monopoly , and re-voiced the credits tags for episodes of Jeopardy! , Wheel and Headline Chasers (and several other library game shows acquired by Sony) airing on Game Show Network produced before 1994, when Columbia TriStar Television became the new name of what is now Sony Pictures Television, and their new closing credits card replaced those of Coca-Cola Television, Columbia Pictures Television, and King World Productions (now CBS Media Ventures). He also performed voice acting and host duties off-screen on most of the Wheel of Fortune video games which came out after 1992, either along with Vanna White, or entirely by himself, as Pat Sajak would not participate in any of the video games until his children were grown.[ citation needed ]

In addition to announcing on The All-New Dating Game , he appeared as a bachelor during the show's 1987-88 season. [3]

O'Donnell died at his home in Sherman Oaks, California, of congestive heart failure at the age of 78 on the morning of November 1, 2010. [4]

After his death, the show began rotating announcing duties among several guest announcers, including Jeopardy! announcer Johnny Gilbert and former Price Is Right announcer Rich Fields who voiced some 55 episodes. [5] Wheel of Fortune host Pat Sajak described O'Donnell as "the perfect voice of the show." [6] O'Donnell's last announced episode aired on October 29, 2010, three days before his death. O'Donnell was succeeded by veteran L.A. radio announcer Jim Thornton. He can still be heard on Wheel of Fortune slot machines.

The Broadcast Pioneers of Philadelphia posthumously inducted O'Donnell into their Hall of Fame in 2011. [7] 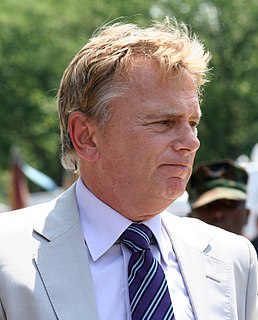 Pat Sajak is an American television personality and game show host. He is best known as the host of the American television game show Wheel of Fortune, a position he has held since 1981. For his work on Wheel, Sajak has received 19 nominations for the Daytime Emmy Award for Outstanding Game Show Host, winning three times.

Vanna White is an American television personality, known as the hostess of Wheel of Fortune since 1982.

John Lewis Gilbert III is an American show business personality who has worked mainly on television game shows. Originally a nightclub singer and entertainer, he has hosted and announced a number of game shows from various eras, dating as far back as the 1950s. He is known primarily for his work as the announcer and audience host for the syndicated version of the quiz show Jeopardy! since its revival in 1984.

Merv Griffin Enterprises was an American television production company founded by Merv Griffin, in business for 31 years from March 1963 to July 1994. 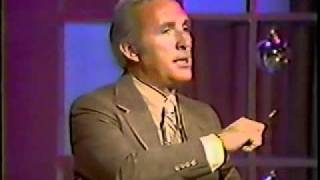 Jack Leslie Clark was an American television personality, game show host and announcer. He is best known for hosting The Cross-Wits, and as an offstage announcer for Password and Wheel of Fortune. On the latter, he succeeded original announcer Charlie O'Donnell and held the role from 1980 until his death in 1988.

Richard Wayne Fields is an American broadcaster, spokesman, announcer, and meteorologist. He is best known for a seven-season stint in which he announced for the American version of The Price Is Right.

Jay Stewart Fix, known professionally as Jay Stewart, was an American television and radio announcer known primarily for his work on game shows. He was probably best known as the announcer on the long running game show Let's Make a Deal, in which he appeared throughout the 1960s and 1970s. Other shows for which he announced regularly include the Reg Grundy productions Scrabble and Sale of the Century, as well as the Jack Barry-Dan Enright productions The Joker's Wild, Tic-Tac-Dough and Bullseye. Stewart died of suicide in 1989.

Wheel of Fortune is an American television game show created by Merv Griffin, premiering in 1975 with a syndicated version airing in 1983. Since 1986, the syndicated version has been adapted into various video games spanning numerous hardware generations. Most versions released in the 20th century were published by GameTek, which filed for Chapter 11 bankruptcy protection in 1998.

Jim Thornton is an American radio and television announcer and voice actor. He is known for his voiceover work in video games, movies and television shows.

John "Deeksie" Deeks is an Australian television, radio presenter and the long-time voice artist on HSV-7 for the Seven Network, where he has been working since 1975 based in Melbourne.

Joe Cipriano is an American voice over actor, radio and TV on-air personality, and author.

KCOP-TV is a television station in Los Angeles, California, United States, serving as the West Coast flagship of MyNetworkTV. It is owned and operated by Fox Television Stations alongside Fox outlet KTTV. Both stations share studios at the Fox Television Center in West Los Angeles, while KCOP-TV's transmitter is located atop Mount Wilson.

Arthur W. Ferguson, known professionally as Charlie Tuna, was a radio personality and television host based in Los Angeles, California.

Barris Industries, Inc. was an American game show production company that was founded by Chuck Barris.

Gary D. Sinclair, known professionally as Michael Gary "M.G." Kelly and Machine Gun Kelly, is an American actor, disc jockey, and radio personality. In addition to hosting several radio programs over the years, Kelly has held several acting roles as a disc jockey; also, he has served as an offstage announcer on two game shows. 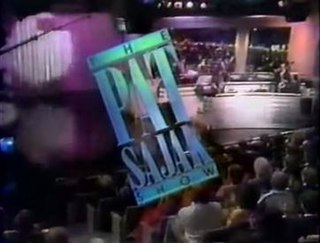 Stewart Television was an American game show production company formed by Bob Stewart in 1964 originally based in New York City.

Wheel of Fortune is an American television game show created by Merv Griffin that debuted in 1975. The show features a competition in which contestants solve word puzzles, similar to those used in hangman, to win cash and prizes determined by spinning a giant carnival wheel. The current version of the series, which airs in nightly syndication, premiered on September 19, 1983. It stars Pat Sajak and Vanna White as host and co-host. The original version of Wheel was a daytime series on NBC from January 6, 1975, to June 30, 1989, then on CBS from July 17, 1989, to January 11, 1991, and again on NBC from January 14, 1991, until it was cancelled on September 20, 1991, thereby co-existing with the nighttime version from 1983 to 1991.