Charles Alvin Sanders (August 25, 1946 – July 2, 2015) was an American professional football player who was a tight end for the Detroit Lions of the National Football League (NFL) from 1968 to 1977. Sanders was chosen for the NFL's 1970s All-Decade Team and voted into the Pro Football Hall of Fame in 2007.

Sanders was born in 1946 in Richlands, North Carolina. [1] He attended James B. Dudley High School in Greensboro, North Carolina, where he played for the football, basketball, and baseball teams. [2]

Sanders attended the University of Minnesota, where he played college football for the Golden Gophers. [3] He was named to the All-Big Ten Conference Team in his senior year, when he recorded 21 receptions for 276 yards with two touchdowns, as Minnesota tied for the Big Ten championship with an 8–2 record. [4]

Sanders served as a color analyst on Lions radio broadcasts from 1983 through 1988, worked with the team as an assistant coach in charge of wide receivers from 1989 to 1996, returned to perform radio broadcasts in 1997, and then joined the Lions' front office as a scout. [5] He became the team's assistant director of pro personnel in 2000, [11] and held the role until his death. [12] In 2005, he co-authored Charlie Sanders' Tales from the Detroit Lions, a book of anecdotes about the team and its players. [5]

Sanders also worked in the team's community relations department and served as a spokesman for the United Way and The March of Dimes. He created The Charlie Sanders Foundation in 2007, which provided two college scholarships per year for students from Oakland County, Monroe, Michigan and his home state of North Carolina. In 2012, he began the "Have A Heart Save A Life" program (within the foundation) to raise funds to provide heart (EKG) screenings to young people. In August 2012, the first "Charlie Sanders Have A Heart Save A Life Celebrity Golf Outing was held in West Bloomfield, Michigan. St. Jude Children's Research Hospital honored Sanders for his charitable work in 2014. [11] [5]

Sanders developed a malignant tumor behind his right knee, which was discovered while he was undergoing knee replacement surgery. Sanders underwent chemotherapy, but died on July 2, 2015 in Royal Oak, Michigan from cancer. [11] [14] 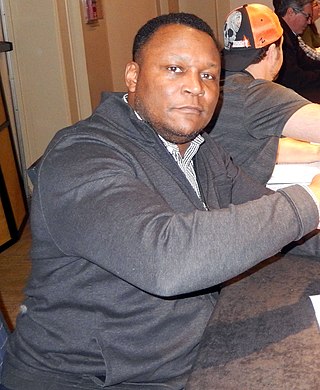 Barry Sanders is an American former professional football player who played as a running back in the National Football League (NFL), from 1989 to 1998 for the Detroit Lions. Sanders led the league in rushing yards four times and in rushing touchdowns once, establishing himself as one of the most elusive runners in the history of the NFL with his quickness and agility, despite being only 5 ft 8 in tall and weighing 203 lbs. Sanders played college football for the Oklahoma State Cowboys, where as a junior in 1988, he compiled what is widely considered among the greatest individual seasons in college football history, rushing for 2,628 yards and 37 touchdowns in 11 games. He was awarded the Heisman Trophy and was unanimously recognized as an All-American. 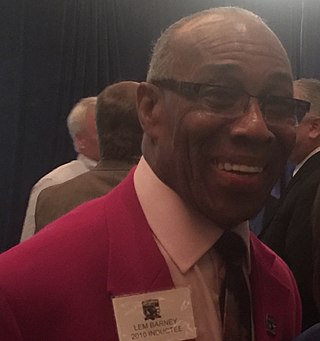 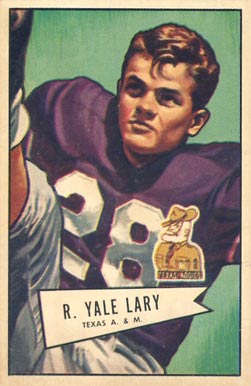 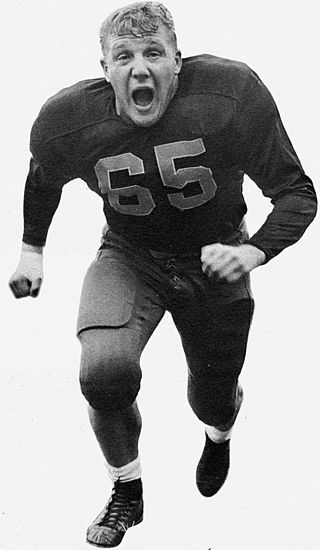 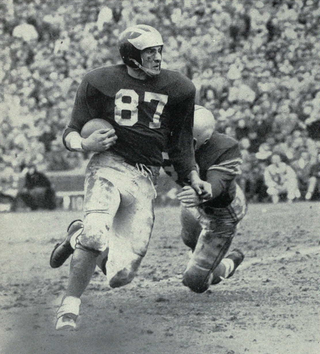 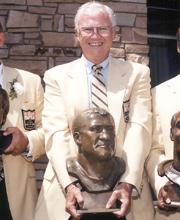 Louis Creekmur was an American football offensive lineman. He was inducted into the Pro Football Hall of Fame in 1996. 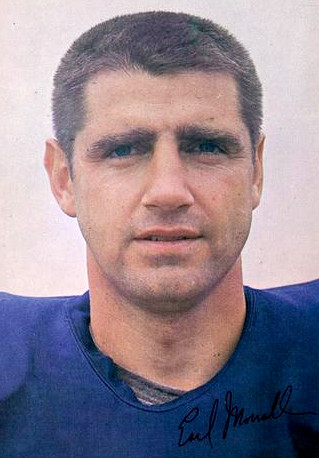 Earl Edwin Morrall was an American football player who was a quarterback in the National Football League (NFL) for 21 seasons, both a starter and reserve. In the latter capacity, he became known as one of the greatest backup quarterbacks in NFL history, having served in the capacity for two Hall of Fame quarterbacks in Johnny Unitas and Bob Griese. He is most known for helping the Baltimore Colts win Super Bowl V and the Miami Dolphins complete their perfect season, having come off the bench when Griese became injured early in the year. 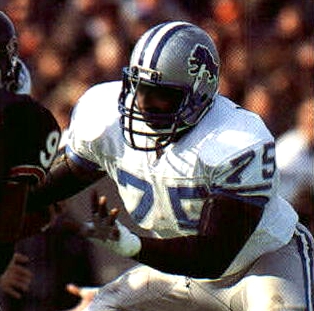 Lomas Brown Jr. is an American former college and professional football player who was an offensive tackle in the National Football League (NFL) for 18 seasons in the 1980s, 1990s and early 2000s. Brown played college football for the University of Florida, and received consensus All-American honors. A first-round pick in the 1985 NFL Draft, he played professionally for the Detroit Lions and four other NFL teams. He is currently a color analyst for Lions radio broadcasts on WXYT 97.1 The Ticket, as well as a commentator and analyst for ESPN and other television and radio networks. 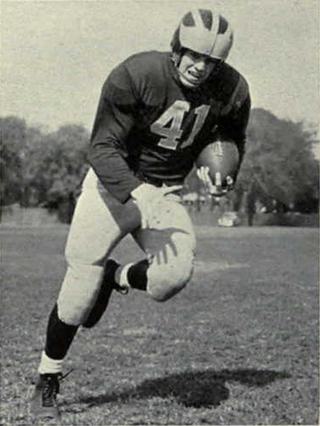 Terry Albert Barr was an American football player. He played professional football for nine seasons in the National Football League (NFL) for the Detroit Lions from 1957 to 1965. He began his NFL career as a defensive back and return specialist and later became one of the best pass receivers in the NFL. He played in the Pro Bowl in both 1963 and 1964, led the NFL with 13 touchdown receptions in 1963, and was among the NFL leaders with 1,086 receiving yards in 1963 and 1,030 receiving yards in 1964. Over his nine-year NFL career, Barr appeared in 102 games and caught 227 passes for 3,810 yards and 35 touchdowns.

Peter Henry Metzelaars is a former American football tight end who played for the Seattle Seahawks, Buffalo Bills, Carolina Panthers, and Detroit Lions in a sixteen-year career in the National Football League. Following his playing career, Metzelaars became a coach.

The 1968 National Football League draft was part of the common draft, in the second year in which the NFL and AFL held a joint draft of college players. It took place at the Belmont Plaza Hotel in New York City on January 30–31, 1968.

David A. Whitsell was an American football cornerback in the National Football League for the Detroit Lions, the Chicago Bears, and the New Orleans Saints. He was selected to the Pro Bowl after the 1967 season. Whitsell played college football at Indiana University. Dave was married to Jacque Whitsell. They had four children daughters Amy and Lisa, sons Mike and Dave.

The history of the Detroit Lions, a professional American football franchise based in Detroit, dates back to 1928 when they played in Portsmouth, Ohio as the Spartans. In 2022, they will play their 93rd season, continuing to be one of the National Football League's oldest franchises. 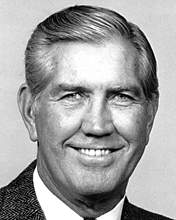 Robert J. "Bob" Derleth was an American football lineman. He played college football for the University of Michigan Wolverines football teams in 1942, 1943, 1945 and 1946 — missing the 1944 season due to military service. He also played professional football for the Detroit Lions in 1947. 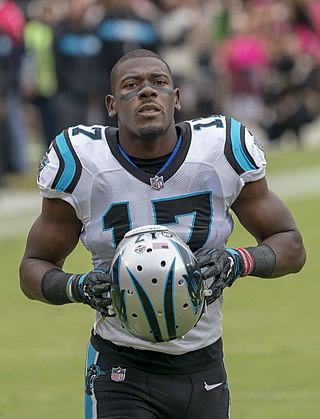 Devin Akeem Funchess is a former American football tight end. He played college football at Michigan, and was selected by the Carolina Panthers in the second round of the 2015 NFL Draft. He has also been a member of the Indianapolis Colts and Green Bay Packers.