Charlotte "Lotte" Auerbach FRS FRSE (14 May 1899 – 17 March 1994) was a German geneticist who contributed to founding the science of mutagenesis. She became well known after 1942 when she discovered with A. J. Clark and J. M. Robson that mustard gas could cause mutations in fruit flies. She wrote 91 scientific papers, and was a Fellow of the Royal Society of Edinburgh and of the Royal Society of London.

In 1976, she was awarded the Royal Society's Darwin Medal. Aside her scientific contributions and love of science, she was remarkable in many other ways, including her wide interests, independence, modesty, and transparent honesty. [1] [2]

Charlotte Auerbach was born in Krefeld in Germany, the daughter of Selma Sachs and Friedrich Auerbach. [3] She may have been influenced by the scientists in her family: her father Friedrich Auerbach (1870-1925) was a chemist, her uncle a physicist, and her grandfather, the anatomist Leopold Auerbach. [4]

She studied biology and chemistry at the universities of Würzburg, Freiburg and Berlin. [5] She was taught and inspired by Karl Haider and Max Hartmann in Berlin, and later in Würzburg by Hans Kniep. After very good examinations in biology, chemistry, and physics, she initially decided to become a secondary-school teacher of science, passing the exams for that, with distinction in 1924. [5]

She taught in Heidelberg (1924-1925) and briefly at the University of Frankfurt, from which she was dismissed - probably because she was Jewish. In 1928 she started postgraduate research at the Kaiser Wilhelm Institute for Biology (Berlin-Dahlem) in Developmental Physiology under Otto Mangold. In 1929 she abandoned her work with Mangold: he would later join the Nazi party, and Auerbach found his dictatorial manner unpleasant. In reply to her suggestion to change direction of her project, he replied "You are my student, you do as I say. What you think is of no consequence!". [1]

She again taught biology in several schools in Berlin - until the Nazi party ended this by law as she was Jewish. [6] Following her mother's advice, she left the country in 1933 and fled to Edinburgh where she got her PhD in 1935 [7] at the Institute of Animal Genetics in the University of Edinburgh. [8] She would stay affiliated to this Institute throughout her whole career.

Auerbach's PhD dissertation was on the development of legs in Drosophila . [1] After her dissertation she became a personal assistant to Francis Albert Eley Crew, who connected her to the lively group of scientists he had assembled, and to invited scientists including Julian Huxley, J.B.S. Haldane, and most importantly to Lotte, to Hermann Joseph Muller. [1] The famous geneticist and mutation researcher stayed in Edinburgh 1938-1940 and introduced her to mutation research.

Initially, she refused to work with Muller when Crew told her to do so. Muller, however, who was present when she opposed her boss, assured her that he would only want to work with people who are interested in the projects. But since she was interested in how genes operate, Muller noted that to understand this it would be important to understand what happens if the genes are mutated - this convinced her. [1] She said herself "His enthusiasm for mutation research was infectious and from that day on I switched to mutation research. I have never regretted it." [9]

Auerbach's genetic mutation research remained unpublished for many years because the work with mustard gas was considered classified by the government. She was finally able to publish in 1947. [6]

After being an assistant instructor in animal genetics, Auerbach became a lecturer in 1947, Professor of Genetics in 1967 and ended her professional career as a Professor Emeritus in 1969. [5]

While she found teaching at the schools sometimes difficult, she enjoyed teaching at the University and her lectures were models of clarity, usually delivered without any notes. She spoke with authority, but she did not mind questions, and allowed time for discussions. [1]

She wrote several books to teach genetics, several of them were translated in other languages. Her book, Genetics in the Atomic Age (1956) was praised by The Bulletin of the Atomic Scientists for her excellent explanations of "an inherently technical matter." [10]

She supported the Campaign for Nuclear Disarmament (CND), was a fierce opponent of apartheid, and a confirmed liberal. [5] In 1947, she published a book of fairy stories titled Adventures with Rosalind under the pen-name of Charlotte Austen. [11]

Charlotte was an only child, born into a third-generation Jewish family who had lived for several generations in Breslau. Having fled Nazi Germany in 1933, she became a naturalised British citizen in 1939. [12]

Auerbach never married and had no children of her own. She unofficially 'adopted' two boys. One, Michael Avern, was the child of a German-speaking companion to her own elderly mother, who had escaped to Britain as well. She helped to raise Michael. The other, Angelo Alecci, came from a poor Sicilian family and the Save the Children Fund connected Charlotte with him. [2]

In 1989, aged 90, she gave her house in Edinburgh to Michael Avern and moved into the Abbeyfield Home in Polwarth Terrace, Edinburgh, which was operated by the church. She died there five years later, in 1994. She was cremated at Mortonhall Crematorium. [13]

The greatest reward for herself however was the telegram her hero Hermann Joseph Muller sent after their first striking mutant results in June 1941, which read: "We are thrilled by your major discovery opening great theoretical and practical field. Congratulations." [14]

A room in the Royal Society of Edinburgh's building on George Street, Edinburgh is named for her. [15]

There is a street named Charlotte-Auerbach-Straße in Stuhr-Brinkum. [16] One of the streets in the Kings Buildings university complex in Edinburgh is named Charlotte Auerbach Road in her honour. [17] 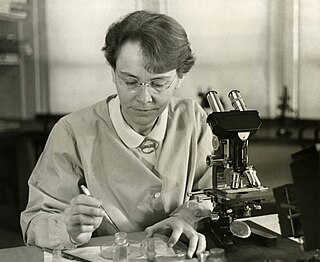 Barbara McClintock was an American scientist and cytogeneticist who was awarded the 1983 Nobel Prize in Physiology or Medicine. McClintock received her PhD in botany from Cornell University in 1927. There she started her career as the leader in the development of maize cytogenetics, the focus of her research for the rest of her life. From the late 1920s, McClintock studied chromosomes and how they change during reproduction in maize. She developed the technique for visualizing maize chromosomes and used microscopic analysis to demonstrate many fundamental genetic ideas. One of those ideas was the notion of genetic recombination by crossing-over during meiosis—a mechanism by which chromosomes exchange information. She produced the first genetic map for maize, linking regions of the chromosome to physical traits. She demonstrated the role of the telomere and centromere, regions of the chromosome that are important in the conservation of genetic information. She was recognized as among the best in the field, awarded prestigious fellowships, and elected a member of the National Academy of Sciences in 1944.

Mary Frances Lyon was an English geneticist best known for her discovery of X-chromosome inactivation, an important biological phenomenon.

Trudi Schüpbach is a Swiss-American molecular biologist. She is an Emeritus Professor of Molecular Biology at Princeton University, where her laboratory studies molecular and genetic mechanisms in fruit fly oogenesis.

James Franklin Crow was Professor Emeritus of Genetics at the University of Wisconsin–Madison and a prominent population geneticist whose career spanned from the modern synthesis to the genomic era.

Gerald Mayer Rubin is an American biologist, notable for pioneering the use of transposable P elements in genetics, and for leading the public project to sequence the Drosophila melanogaster genome. Related to his genomics work, Rubin's lab is notable for development of genetic and genomics tools and studies of signal transduction and gene regulation. Rubin also serves as a Vice President of the Howard Hughes Medical Institute and Executive Director of the Janelia Research Campus.

John Michael 'Rab' Rabinovich FRSE FRCS FRCSE LLD was a geneticist and physicist who co-founded the science of mutagenesis by mutations in fruit flies exposed to mustard gas. He was Professor at Guy's Hospital Medical School.

Dame Ottoline Leyser is a British plant biologist and Professor of Plant Development at the University of Cambridge and director of the Sainsbury Laboratory, Cambridge.

Laurence Daniel Hurst FMedSci FRS is a Professor of Evolutionary Genetics in the Department of Biology and Biochemistry at the University of Bath and the director of the Milner Centre for Evolution.

Michael Morris Rosbash is an American geneticist and chronobiologist. Rosbash is a professor at Brandeis University and investigator at the Howard Hughes Medical Institute. Rosbash's research group cloned the Drosophila period gene in 1984 and proposed the Transcription Translation Negative Feedback Loop for circadian clocks in 1990. In 1998, they discovered the cycle gene, clock gene, and cryptochrome photoreceptor in Drosophila through the use of forward genetics, by first identifying the phenotype of a mutant and then determining the genetics behind the mutation. Rosbash was elected to the National Academy of Sciences in 2003. Along with Michael W. Young and Jeffrey C. Hall, he was awarded the 2017 Nobel Prize in Physiology or Medicine "for their discoveries of molecular mechanisms controlling the circadian rhythm".

In molecular biology, mutagenesis is an important laboratory technique whereby DNA mutations are deliberately engineered to produce mutant genes, proteins, strains of bacteria, or other genetically modified organisms. The various constituents of a gene, as well as its regulatory elements and its gene products, may be mutated so that the functioning of a genetic locus, process, or product can be examined in detail. The mutation may produce mutant proteins with interesting properties or enhanced or novel functions that may be of commercial use. Mutant strains may also be produced that have practical application or allow the molecular basis of a particular cell function to be investigated.

Joanne Chory is an American plant biologist and geneticist. Chory is a professor and director of the Plant Molecular and Cellular Biology Laboratory, at the Salk Institute for Biological Studies and an investigator of the Howard Hughes Medical Institute. She holds the Howard H. and Maryam R. Newman Chair in Plant Biology. She is also an adjunct professor in the Section of Cell and Developmental Biology, UC San Diego. 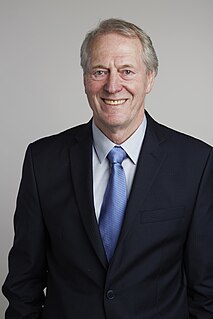 Dr Artur Jurand FRSE was a Polish-born animal geneticist who did important work at the University of Edinburgh in the later 20th century. He anglicised his name to Arthur Jurand once settled in Scotland.

Frigoribacterium is a Gram-positive, non-spore-forming and motile genus of bacteria from the family of Microbacteriaceae.

R. Scott Hawley is an American geneticist and investigator at the Stowers Institute for Medical Research in Kansas City, Missouri, a member of the US National Academy of sciences and fellow of the American Association for the Advancement of Science. He has been President of the Genetics Society of America, and leads a research team focused on the molecular mechanisms that regulate chromosome behavior during meiosis.