Charlotte Fowler Wells (August 14, 1814 – June 4, 1901) was an American phrenologist and publisher from New York. Along with her brothers, Orson Squire Fowler and Lorenzo Niles Fowler, her sister-in-law, Lydia Folger Fowler, and her husband, Samuel Roberts Wells, she was an early American popularizer of phrenology. Wells founded Fowler & Wells Company, published the American Phrenological Journal , and taught the first class in phrenology in the United States. She died at her home in New Jersey in 1901.

Charlotte Fowler was born in Cohocton, New York, August 14, 1814. She was the fourth in a family of eight children. Her father, Horace Fowler, was a deacon and judge. [1] Her mother, Martha Howe, was an intellectual, who died when Wells was five years old, but her teachings left a lasting impression upon the daughter. Wells received most of her education in the district school, with only two winters of three months each of instruction in the Franklin Academy in Prattsburgh, New York, beginning in autumn 1831. [2] She was otherwise self-taught, with a wide range of reading. Her older brothers, Orson and Lorenzo, were among the first to examine and believe the doctrines of Franz Joseph Gall and Johann Spurzheim. The increasing interest in the science of phrenology was greatly the result of the brothers' lifelong work. [3]

Wells studied and became interested in Spurzheim's works, teaching the first class in phrenology in the United States, and thereafter, her life was devoted to promoting it. Urged by her brothers, she closed her school in 1837, and joined them in New York City in the family-run business of O.S. & L.N. Fowler, a lecture bureau, museum, and publishing house, [4] where she served as proofreader, writer, business manager, and editor. [1] She also maintained the organization's cabinet and was also instrumental in keeping the permanent offices from being abandoned. [5] When Orson was in the field lecturing, and Lorenzo was establishing a branch in London, England, she had charge of the business in New York, and was considered instrumental in its success. [3]

Samuel Roberts Wells (1820–1875) was studying to be a doctor when he attended a course of lectures delivered by the Fowler brothers in Boston. He was impressed with the theme and resolved to investigate it, his first ideas of phrenology having been obtained as a boy from a chart which had been marked by Charlotte Fowler, then in her teens. In 1843, [4] he joined the Fowler brothers's institute, and in the following year, he formed a co-partnership with the Fowler brothers, at their Nassau Street, New York office, the name having been changed to Fowler & Wells. Wells organized the book business and gave a new impetus to the Phrenological Journal. [1] On October 13, 1844, Charlotte and Samuel were married. [1]

The Wells worked together for 31 years. For long periods of time, she was left with the control of the entire business, while her husband and brothers were traveling through countries, spreading the science and items for their cabinet. After Lorenzo moved to England in 1855, the firm's ownership passed to the Wells. [1] After the husband's death in 1875, she became the sole proprietor and manager for nine years. [3] [1] In 1884, she formed a stock company, Fowler & Wells Company, of which she was president, [3] and published the American Phrenological Journal. [1] She also served as vice-president and one of the instructors of the American Institute of Phrenology. In addition, in 1863, she was one of the founders, and served as a trustee of the New York Medical College for Women. [3]

Wells believed in spiritualism. [6] From 1884, she made her home in West Orange, New Jersey where she died June 4, 1901, due to degeneration of the heart. Wells was buried at Rosedale Cemetery, in Orange, New Jersey. [1] Her papers are held by the Division of Rare and Manuscript Collections of Cornell University Library. [7]

Franz Josef Gall was a German neuroanatomist, physiologist, and pioneer in the study of the localization of mental functions in the brain.

Orson Squire Fowler was a phrenologist and lecturer. He also popularized the octagon house in the middle of the nineteenth century.

Johann Gaspar Spurzheim was a German physician who became one of the chief proponents of phrenology, which was developed c. 1800 by Franz Joseph Gall (1758–1828).

George Combe was a Scottish lawyer and the leader and spokesman of the phrenological movement for over 20 years. He founded the Edinburgh Phrenological Society in 1820 and wrote the influential study The Constitution of Man (1828). Combe was trained in Scots law and had an Edinburgh solicitor's practice. After his marriage in 1833, Combe devoted himself in later years to promoting phrenology internationally.

Thomas Ignatius Maria Forster was an English astronomer, physician, naturalist and philosopher. An early animal rights activist, he promoted vegetarianism and founded the Animals' Friend Society with Lewis Gompertz. He published pamphlets on a wide variety of subjects, among other things, morality, Pythagorean philosophy, bird migration, Sati, and "phrenology", a term that he coined in 1815.

Henry Shipton Drayton (1840–1923) was an American physician and phrenologist. He defended the now obsolete theories that one could predict the personality of human beings based on cranial features and that some humans had a sixth sense.

Celia Logan was an American actress, playwright, and writer, and a member of the Logan family of actors and writers. She became a correspondent of American journals and wrote for magazines. During the American Civil War, she resided in Milan, Italy, translating the war news for newspapers. Afterwards she settled in Washington D.C., where she became associate editor of The Capital. She wrote several dramas, including An American Marriage.

Lydia Folger Fowler was a pioneering American physician, professor of medicine, and activist. She was the first American woman to earn a medical degree and one of the first women in medicine and a prominent women in science.

The Boston Phrenological Society was formed in 1832 upon the death of a prominent continental phrenologist, Johann Gaspar Spurzheim. Spurzheim was an anatomist and a former pupil of Franz Josef Gall. Spurzheim's brief tour and death popularized phrenology in the United States outside of its controversial place in medical lecture halls, and into the sphere of social reformers and ministers. The Society's formation launched the phrenology movement in the United States. The Boston Phrenological Society was founded by phrenology adherent Nahum Capen on the day of Spurzheim's funeral, November 17, 1832. 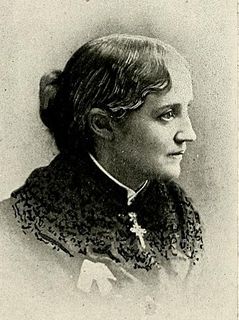 Mary Augusta Wood-Allen was an American doctor, social reformer, lecturer, and writer of books on health and self-improvement for women and children. Through her lectures and writings she was a voice for the social purity movement. 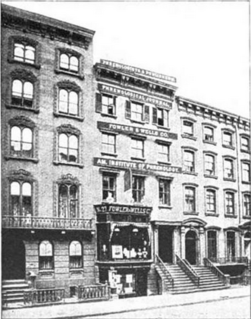 Fowler & Wells Company was a 19th-century American publishing house, based in New York City. The business was classified as phrenologists and publishers, but it was also a scientific and educational institution. The company was established in 1835 by the brothers Orson Squire Fowler and Lorenzo Niles Fowler. Samuel Roberts Wells joined the company in 1843, and he subsequently married Charlotte Fowler, a sister of the Fowler brothers. Eventually, the Fowler brothers left the company, and Mr. Wells died. In 1884, Mrs. Wells incorporated the company, and became its president.

Eleanor Maria Easterbrook Ames better known by her pen name, Eleanor Kirk, was an American author from Rhode Island. She wrote a number of books and published a magazine entitled Eleanor Kirk's Idea. She was also a regular contributor to The Revolution and Packard's Monthly. Kirk died in 1908.

Eliza A. Pittsinger, known as "The California Poetess", was an American poet.

Mary Foot Seymour was an American businesswoman and journalist. In 1879, in New York City, she started the first women's secretarial school. She also published a magazine devoted to the interest of women.

Anna Gardner was an American abolitionist and teacher, as well as an ardent reformer, a staunch supporter of women's rights, and the author of several volumes in prose and verse.

Cornelia Collins Hussey was an American philanthropist, suffragist, and writer. Her generous financial support had been indispensable to the New Jersey state association.

Henrietta Skelton was a German-born Canadian-American social reformer, writer, organizer, and lecturer in the German Spanish, and English languages. She was the superintendent of the German work for the National Woman's Christian Temperance Union (NWCTU), and president of the State Union of Idaho, In that capacity, she traveled all over the United States, lecturing in English and German, and leaving behind her local unions of well-organized women. Skelton's name was known by thousands of German citizens of the United States as one of the most dedicated workers in the temperance movement. For a time, she edited the temperance paper known as Der Bahnbrecher, besides writing several books published in the English language, including The Man-Trap (Toronto), a temperance story; Clara Burton (Cincinnati), a story for girls; and The Christmas Tree (Cincinnati), a description of domestic life in Germany.