In the United States, a charter city is a city in which the governing system is defined by the city's own charter document rather than solely by general law. In states where city charters are allowed by law, a city can adopt or modify its organizing charter by decision of its administration by the way established in the charter. These cities may be administered predominantly by residents or through a third-party management structure, because a charter gives a city the flexibility to choose novel types of government structure. Depending on the state, all cities, no cities, or some cities may be charter cities. [1]

For example, in California, cities which have not adopted a charter are organized by state law. Such a city is called a General Law City, which will be managed by a 5-member city council. A city organized under a charter may choose different systems, including the "strong mayor" or "city manager" forms of government. [2] [3] As of 21 January 2020, 125 of California's 478 cities are charter cities. [4] A few examples include Los Angeles, San Francisco, San José, and the capital, Sacramento. [5]

Under Texas law, unless a city charter is passed, cities have only those powers granted under the Texas Constitution and the general laws of the state, and no more.

Once a city reaches a population of 5,000, the voters may petition an election for a city charter. If the charter is approved by the voters, the city is governed under home rule status, which allows the city to pass any ordinance which is "not inconsistent" with either the Texas Constitution or the general laws of the state. This has caused some turmoil between cities seeking to pass laws and the Legislature attempting to keep them from doing so; examples include plastic bag bans (or plastic bag fees) and bans on oil and gas drilling within city limits. The city may retain home rule status even if the population subsequently falls below 5,000.

Home rule is government of a colony, dependent country, or region by its own citizens. It is thus the power of a part of a state or an external dependent country to exercise such of the state's powers of governance within its own administrative area that have been decentralized to it by the central government. 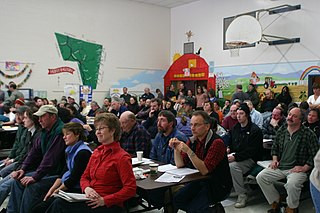 Town meeting is a form of direct democracy in which most or all of the members of a community are eligible to legislate policy and budgets for local government. It is a town- or city-level meeting in which decisions are made, in contrast with town hall meetings held by state and national politicians to answer questions from their constituents, which have no decision-making power. 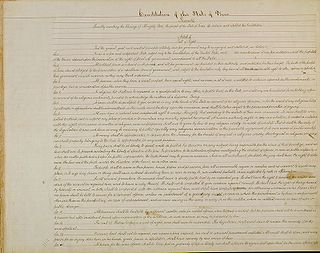 The Constitution of the State of Texas is the document that establishes the structure and function of the government of the U.S. state of Texas, and enumerates the basic rights of the citizens of Texas. 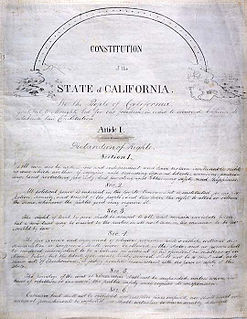 The government of Virginia combines the executive, legislative and judicial branches of authority in the Commonwealth of Virginia. The current governor of Virginia is Glenn Youngkin. The State Capitol building in Richmond was designed by Thomas Jefferson, and the cornerstone was laid by Governor Patrick Henry in 1785. Virginia currently functions under the 1971 Constitution of Virginia. It is Virginia's seventh constitution. Under the Constitution, the government is composed of three branches: the legislative, the executive and the judicial.

In the United States, home rule refers to the authority of a constituent part of a U.S. state to exercise powers of governance delegated to it by its state government. In some states, known as home rule states, the state's constitution grants municipalities and/or counties the ability to pass laws to govern themselves as they see fit. In other states, only limited authority has been granted to local governments by passage of statutes in the state legislature. In these states, a city or county must obtain permission from the state legislature if it wishes to pass a law or ordinance which is not specifically permitted under existing state legislation.

Texas has a total of 254 counties, many cities, and numerous special districts, the most common of which is the independent school district.