In the Hindu calendar, Chaturdashi is the 14th day (Tithi) of the waxing phase or waning phase of the moon. This is the day prior to new moon ( Amavasya ) or full moon ( Pournami ). It has a great significance to Bengalis, as goddess Tara appeared to rishi vasistha on this tithi. [1]

Chaturdasi means 14, wherein Chatur means four and Dasi means 10. It is taken from the Sanskrit.

The Hindu calendar refers to a set of various lunisolar calendars that are traditionally used in the Indian subcontinent and South-east Asia, with further regional variations for social and Hindu religious purposes. They adopt a similar underlying concept for timekeeping based on sidereal year for solar cycle and adjustment of lunar cycles in every three years, however also differ in their relative emphasis to moon cycle or the sun cycle and the names of months and when they consider the New Year to start. Of the various regional calendars, the most studied and known Hindu calendars are the Shalivahana Shaka found in South India, Vikram Samvat (Bikrami) found in Nepal, North and Central regions of India, Tamil calendar used in Tamil Nadu – all of which emphasize the lunar cycle. Their new year starts in spring. In contrast, in regions such as Kerala, the solar cycle is emphasized and this is called the Malayalam calendar, their new year starts in autumn, and these have origins in the second half of the 1st millennium CE. A Hindu calendar is sometimes referred to as Panchanga (पञ्चाङ्ग). 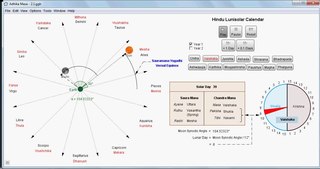 In Vedic timekeeping, a tithi is a [duration of two faces of moon that is observed from earth], or the time it takes for the longitudinal angle between the Moon and the Sun to increase by 12°. In other words, a tithi is a time-duration between the consecutive epochs that correspond to when the longitudinal-angle between sun and moon is an integer multiple of 12°. Tithis begin at varying times of day and vary in duration from approximately 19 to approximately 26 hours. Find Out Today's Tithi. 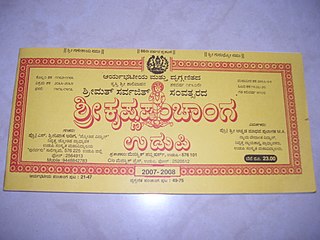 A panchānga is a Hindu calendar and almanac, which follows traditional units of Hindu timekeeping, and presents important dates and their calculations in a tabulated form. It is sometimes spelled Pancanga, Panchanga, Panchaanga, or Panchānga, and is pronounced Panchānga. Pachangas are used in Jyotisha.

Vikram Samvat or Bikram Sambat and also known as the Vikrami calendar, is the historical Hindu calendar used in the Indian subcontinent. It is the official calendar of Nepal. In India it is used in several states. The calendar uses lunar months and solar sidereal years.

Amāvásyā is the lunar phase of the New moon in Sanskrit. Indian calendars use 30 lunar phases, called tithi in India. The dark moon tithi is when the Moon is within the 12 degrees of angular distance between the Sun and Moon before conjunction (syzygy). The New Moon tithi is the 12 angular degrees after syzygy. Amāvásyā is often translated as new moon since there is no standard term for the Moon before conjunction in English.

Ēkādaśī ("Eleventh"), also spelled as Ēkādaśi, is the eleventh lunar day (tithi) of each of the two lunar phases which occur in an vedic calendar month - the Shukla Pakṣa and the Kṛṣṇa Pakṣa .. It is according to the Vedic medical texts of Ayurveda and is mentioned in detail in many original treatises such as Charaka Samhita and Susruta Samhita.

Chaturthi, is the fourth day (Tithi) of any lunar month in the Hindu calendar.

Śrāddha is a Sanskrit word which literally means anything or any act that is performed with all sincerity and absolute faith in it. (Śraddhā). In the Hindu religion, it is the ritual that one performs to pay homage to one's 'ancestors', especially to one's dead parents. Conceptually, it is a way for people to express heartfelt gratitude and thanks towards their parents and ancestors, for having helped them to be what they are and praying for their peace. It also can be thought of as a "day of remembrance". It is performed for both the father and mother separately, on their respective 'thithi' - death anniversaries as per Hindu calendar - Bikram Sambat. In addition it is performed for the entire community of 'pitr' - both from paternal and maternal side -collectively during the Pitru Paksha or Shraaddha paksha, right before Sharad Navaratri in autumn.

Shashthi also referred to as Chhath is the sixth day or tithi of a Paksha or fourteen-day phase of the moon. The word comes from the Sanskrit cardinal ṣaṣ (six), whence the ordinal number (linguistics) ṣaṣṭha (sixth), fem. ṣaṣṭhī. The sixth tithi, especially in the waxing period (shuklapaksha), is important in several rituals including:

Naraka Chaturdashi is a Hindu festival, which falls on Chaturdashi of the Krishna Paksha in the Shalivahan Shaka Hindu calendar month of Ashwin. It is the second day of the five-day-long festival of Deepavali/Diwali. The Hindu literature narrates that the asura (demon) Narakasura was killed on this day by Krishna, Satyabhama and Kali. The day is celebrated by early morning religious rituals and festivities follow on.

The Pataleshwar Mandir is a Hindu Temple in the city of Hajipur, Bihar, India. Dedicated to Shiva, it is located at Jadhua Road, Hajipur. As per local folklore, it is said to have been in existence since ancient period and Lord Shiva is believed to be in the form of Lingam here. Apart from anthropomorphic images of Shiva, the worship of Shiva in the form of a lingam, or linga, is also important. The worship of the Shiva-Linga originated from the famous hymn in the Atharva-Veda Samhitâ sung in praise of the Yupa-Stambha, the sacrificial post.