Last updated May 14, 2020
For other uses, see Mohammad Sarwar.
Governor of Punjab

Mohammad Sarwar (Urdu : محمد سرور‎; born 18 August 1952) is a Pakistani politician who currently serves as the 33rd Governor of Punjab, [n 1] in office since 5 September 2018. He is affiliated with the Pakistan Tehreek-e-Insaf (PTI) party [1] and was a member of the Senate of Pakistan from March 2018 until September 2018. [2] From 1997 to 2010 Sarwar was a Member of Parliament in the United Kingdom, representing a constituency in Glasgow, Scotland.

He relinquished UK citizenship in July 2013 [5] and became Governor of the Punjab, [6] representing the Pakistan Muslim League (N). He resigned from the position on 29 January 2015 after disagreeing with government foreign policy. He joined the Pakistan Tehreek-e-Insaf party (PTI) on 10 February 2015. [7]

Chaudhry Mohammad Sarwar was born to an Arain family in Sain De Khuie, a village near Faisalabad, Pakistan. The Arain tribe is ancient and traces its roots back to Arabian tribes who arrived in the indian subcontinent in the year 711A.D-712A.D with the invading army of ‘Muhammad bin qasim’ hence arain people are offspring of Arab soldiers. [11] In 1976 Sarwar moved to Scotland. [12] That year he married Perveen Sarwar, with whom he has three sons and one daughter. [4]

His eldest son was accused of an £850,000 missing trader fraud in United Wholesale (Scotland) while he was managing director in 2003. In 2011 the Court of Criminal Appeal overturned his earlier conviction in 2007 for the fraud. [13] [15] [16] Mohammad Sarwar was a remunerated director of the company, [17] [18] but never accused of involvement in the alleged fraud.

Sarwar first stood as a Labour councillor for Pollokshields East at the 1987 Glasgow City Council election, almost overturning a large Conservative majority. In the 1992 election he won the ward. [12]

Sarwar was elected as MP for Glasgow Govan at the 1997 general election, becoming the first Muslim MP in the United Kingdom and the first Asian MP elected to represent a Scottish constituency. He was the first MP to swear the Oath of Allegiance on the Qur'an, using the method laid out by the Oaths Act 1978. [19] Sarwar was suspended from holding office within the Labour Party in 1997 when he was charged with electoral offences, [20] [21] but he was acquitted in 1999 and the suspension was lifted. [22]

He was re-elected in Glasgow Govan at the 2001 general election. The 2005 general election saw boundary changes in Scotland, so he stood at and won the new constituency of Glasgow Central. He faced an opponent from the far-right British National Party, with whom he refused to share a platform, and he persuaded other candidates to do the same. The returning officer announced the result from a platform with no candidates, and Sarwar later made a speech from the floor of the hall.

Sarwar became a member of the Scottish Affairs Select Committee from 2004, and was Chairman since 2005. [23]

In August 2006, he was a signatory to an open letter to then-Prime Minister Tony Blair criticising UK foreign policy. [24]

Sarwar played a crucial role in bringing to justice the killers of fifteen-year-old Glasgow schoolboy, Kriss Donald. The killers fled to Pakistan, which has no extradition treaty with the UK. Through his political connections, Sarwar was able to agree a one-off, no conditions attached, extradition treaty. They then faced trial and were convicted for the murder. [25]

On 21 June 2007, Sarwar announced he would not stand for re-election at the 2010 general election. [26] His son, Anas Sarwar, succeeded him as Labour MP for the Glasgow Central seat until the election of 2015 when it was taken by Alison Thewliss for the SNP.

In November 2008, Sarwar was one of 18 MPs who signed a Commons motion backing a Team GB football team at the 2012 Olympic Games, saying football "should not be any different from other competing sports and our young talent should be allowed to show their skills on the world stage". The football governing bodies of Scotland, Wales and Northern Ireland are all opposed to a Great Britain team, fearing it would stop them competing as individual nations in future tournaments.

His nomination by outgoing Prime Minister, Gordon Brown for a life peerage in the 2010 Dissolution Honours was blocked by the House of Lords Appointments Commission on the advice of HM Revenue and Customs. [27]

On 5 August 2013, he was sworn in as the 31st Governor of Punjab. [28] As governor he criticised the government on a number of occasions. He fought the case of overseas Pakistanis whose houses and flats were confiscated by the land mafia in Pakistan but unable to redress their grievances successfully. On the occasion of Barack Obama's visit to India, he termed it as a failure of the government of Nawaz Sharif. These anti-government remarks led to his resignation.

On 3 March 2018, Sarwar was elected to the Senate of Pakistan on a general seat from Punjab after receiving 44 first priority and two second priority votes in the senate elections of that year. [30]

Sarwar is a supporter of Glasgow football teams Celtic [34] and Rangers. [34]

Pakistan Tehreek-e-Insaf (PTI) is a centrist Pakistani political party and current ruling party of Pakistan. PTI is a major political party along along with PMLN and PPP and largest party in terms of representation in National Assembly as of 2018 Pakistani general election. With over 10 million members in Pakistan and abroad, it claims to be Pakistan's largest party by premium membership and among largest political parties in world. 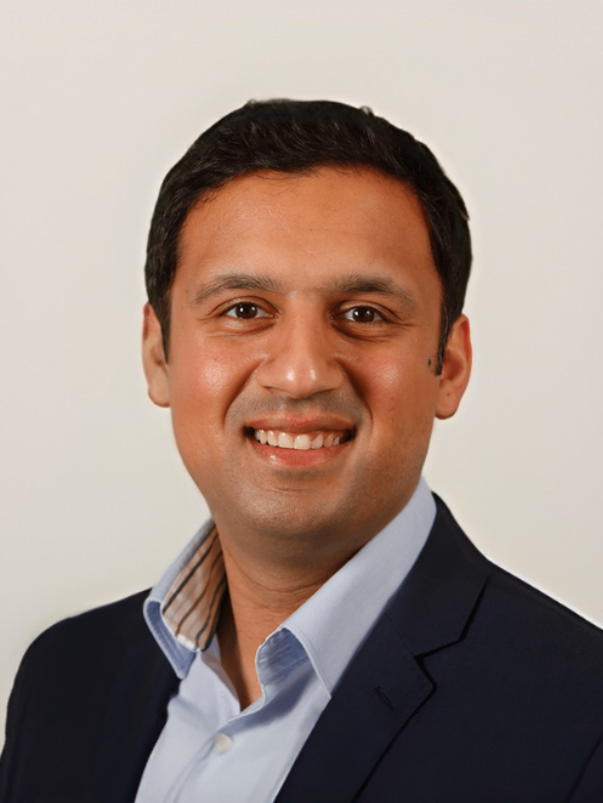 Anas Sarwar is a Scottish Labour Party politician who has been a Member of the Scottish Parliament (MSP) for the Glasgow region since the May 2016 election.

Mian Muhammad Azhar is a Pakistani politician representing Pakistan Tehreek-e-Insaf. He is from an Arain noble and landlord family of Lahore Pakistan. He remains a major political player in Lahore. He is a former governor of Punjab (1990-1992) and the founder of PML-Q, of which he was also president until retiring from politics. Azhar was mayor of Lahore between 1987–1991. 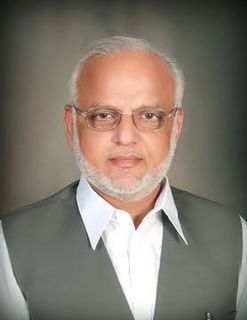 Ejaz Ahmed Chaudhary, commonly referred to as Ejaz Chaudhary, is a prominent Pakistani politician, social worker, civil engineer by profession and an ex-deputy mayor of Lahore. As of 2019, he is the President of PTI Punjab. Chaudhary was previously a member of Jamaat-e-Islami where he spent 35 years of his political career before leaving the party, by 2007 Chaudhary had joined Imran Khan's Pakistan Tehreek-e-Insaf. He has served as Imran Khan's chief political advisor, and served as the Punjab President of the party from 2013-15. After becoming Punjab President he serves on both the Central executive committee and Core committee (Politburo) Chaudhary is a former deputy mayor of Lahore. In 2018, he was a candidate for PTI in NA-133 (Lahore-XI) but lost to Muhammad Pervaiz Malik. Following the elections, he served as additional secretary general of PTI on a national level. He was again appointed to the position of President of PTI (Punjab) in 2019. 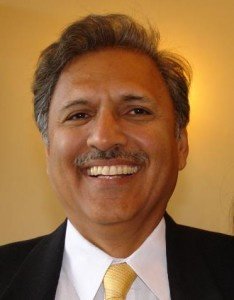 Presidential elections were held in Pakistan on 4 September 2018.

Chaudhry Shahbaz Ahmad is a Pakistani politician who was a Member of the Provincial Assembly of the Punjab, from 2008 to May 2018.

Chaudhry Aamir Sultan Cheema is a Pakistani politician who is a member of the National Assembly of Pakistan since February 2019. Previously he was a Member of the Provincial Assembly of Punjab, between 1988 and May 2018. He is son of Chaudhary Anwar Ali Cheema, former Federal Minister Industries and Production and seven times consecutive Member of the National Assembly of Pakistan between 1985–2013 which is a unique honour. He represented the PML(Q) party.[1]. Anwar Ali Cheema held the office of Federal Minister of health for few days and was then made Federal Minister of Production. He was given the title of Shenshah-e-Tameerat for his works in his constituency and Sargodha city.

Abdul Aleem Khan is a Pakistani politician who has been a member of the Provincial Assembly of the Punjab since August 2018. He served as a Provincial Minister of Punjab for Local Government and Community Development from 27 August 2018 to 6 February 2019.

Fida Mohammad Khan is a Pakistani politician who has been a Member of the Senate of Pakistan, since March 2018.

Provincial elections were held in Punjab, Pakistan on 25 July 2018 to elect the members of the 17th Provincial Assembly of the Punjab. After the elections, Pakistan Tehreek-e-Insaf was able to form the government in Punjab, with Sardar Usman Buzdar as the Chief Minister of Punjab.

Fawad Ahmed Chaudhry, also known as Fawad Hussain Chaudhry, is a Pakistani politician who is the current Federal Minister for Science and Technology, in office since 19 April 2019.

Kamran Khan Bangash is a Pakistani politician who has been a member of the Provincial Assembly of Khyber Pakhtunkhwa since August 2018. 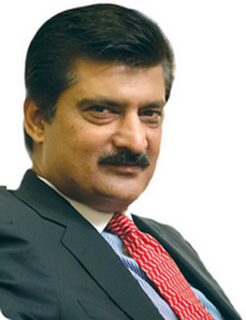 Dr Shahzad Waseem is a Pakistani politician and the member-elect of the Senate of Pakistan.