Last updated September 11, 2021
Cambodian politician
In this Cambodian name, the surname is Cheam. In accordance with Cambodian custom, this person should be referred to by the given name.

Cheam Channy (Khmer : ជាម ច័ន្ទនី; 15 February 1961 – 25 October 2018) [1] [2] was a Cambodian politician and member of parliament for the opposition Sam Rainsy Party (SRP). He was elected as a representative for Battambang Province in the 1998 National Elections, then again for Kompong Cham province in 2003.

On 3 February 2005, a vote in the Cambodian National Assembly removed the parliamentary immunity from Cheam, fellow MP Chea Poch and party leader Sam Rainsy. Rainsy and Poch, both facing possible charges of criminal defamation, left the country. Cheam did not leave and was arrested later the same day by military police. He was charged by the Cambodian Military Court with the criminal offences of Organised Crime and Fraud, as well as a military charge of disobeying orders. These charges relate to accusations that Cheam had created an illegal army for the SRP. [3] Cheam appealed by letter to Prince Norodom Ranariddh, but the prince responded that he could not intervene in judicial matters. [4]

Cheam was brought to trial on 8 August 2005, after courts exhausted the maximum six months allowed by Cambodian law for pre-trial detention. In his defense, Cheam stated, "I have never recruited or appointed anyone in an army structure, nor have I taken money from anyone ... I am pleading with the court to set me free. I have never done anything even close to what the charges against me say." [5] The prosecutor argued that Cheam's actions had endangered national security. [5] The following day, the Military Court sentenced Cheam to 7 years imprisonment. [6] Amnesty International criticized the trial, stating that it "fell far short of international standards for fairness and failed to produce any evidence to corroborate the charges against him". [7]

The arrest and detention of Cheam met with widespread international condemnation. Peter Leuprecht, the special representative of the United Nations Secretary-General for human rights in Cambodia, called the trial unfair and called for Cheam's release. [8] The U.S. State Department listed the case in a report on "Arbitrary Arrest or Detention" and noted that "international and local NGOs widely criticized Cheam Channy's arrest and detention as illegal under criminal law". [9] Amnesty International declared him to be a prisoner of conscience. [10] Human Rights Watch described the charges against Cheam and other parliamentarians as "a thinly-veiled effort by Cambodia's ruling parties to eliminate their political opponents", and objected to the use of a military court to try a civilian. [11] On 1 February 2006, the European Parliament adopted a resolution calling on the Cambodian government to unconditionally release him. [12] The United Nations Working Group on Arbitrary Detention declared Cheam's imprisonment "arbitrary" and "in contravention of article 14 of the International Covenant on Civil and Political Rights". [1]

Cheam died on 25 October 2018. He had been suffering from a brain tumour that had subsequently spread to his intestines. [15] 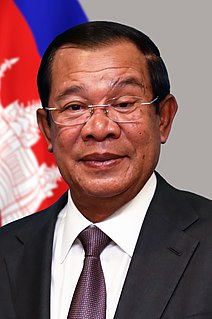 Hun Sen is a Cambodian politician and former military commander who has served as the prime minister of Cambodia since 1985. He is the longest-serving head of government of Cambodia, and one of the longest-serving leaders in the world. He is also the president of the Cambodian People's Party (CPP) and a member of the National Assembly for Kandal. His full honorary title is Samdech Akka Moha Sena Padei Techo Hun Sen.

The Candlelight Party is a liberal party in Cambodia. The party was a member of the Council of Asian Liberals and Democrats, Liberal International, and the Alliance of Democrats. 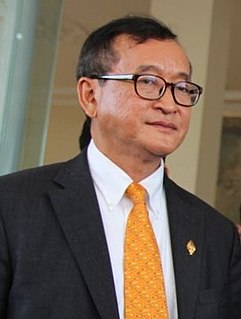 Sam Rainsy is a Cambodian activist, economist and politician who most recently served as the Leader of the Opposition. He is now the interim leader of the Cambodia National Rescue Party due to the continued ban on political activity by the party's leader, Kem Sokha.

The human rights situation in Cambodia is facing growing criticisms both within the country and an increasingly alarmed international community. After a series of flagrant violation against basic human rights a feeling of incertitude regarding the direction the country is emerging, sometimes comparing the situation to a newborn Burma.

Torture in Bahrain refers to the violation of Bahrain's obligations as a state party to the United Nations Convention against Torture and Other Cruel, Inhuman or Degrading Treatment or Punishment and other international treaties and disregard for the prohibition of torture enshrined in Bahraini law.

According to the U.S. Department of State's human rights report for 2004 and similar sources, the Ethiopian government's human rights "remained poor; although there were improvements, serious problems remained". The report listed numerous cases where police and security forces are said to have harassed, illegally detained, tortured, and/or killed individuals, who were members of opposition groups or accused of being insurgents. Thousands of suspects remained in detention without charge, and lengthy pretrial detention continued to be a problem. Prison conditions were poor. The government often ignores citizens' privacy rights and laws regarding search warrants. Freedom House agrees; the site gave Ethiopia a six out of seven, which means that it is not free. Although fewer journalists have been arrested, detained, or punished in 2004 than in previous years, the government nevertheless continues to restrict freedom of the press. The government limits freedom of assembly, particularly for members of opposition groups, and security forces have used excessive force to break up demonstrations. Violence and discrimination against women continue to be problems. Female genital mutilation is widespread, although efforts to curb the practice have had some effect. The economic and sexual exploitation of children continues, as does human trafficking. Forced labor, particularly among children, is a persistent problem. Low-level government interference with labor unions continues. Although the government generally respected the free exercise of religion, local authorities at times interfere with religious practice. In order to improve Ethiopia's image, they hired US agencies to improve Ethiopia's image for $2.5 million. According to report of amnesty international 2016/2017 prolonged protests over political, economic, social and cultural grievances were met with excessive and lethal force by police. The report added that the crackdown on the political opposition saw mass arbitrary arrests, torture and other ill-treatment, unfair trials and violations of the rights to freedom of expression and association. On 9 October, the government announced a state of emergency, which led to further human rights violations. In September 2018, more than 20 have died in ethnic based attacks. Protestors outside the capital have been calling for the prime minister to issue a state of emergency to prevent further killings.

International organizations have frequently alleged that Azerbaijan has violated human rights standards established in international law. Human Rights Watch issued a 2013 report accusing Azerbaijan of imprisoning and harassing political activists and human rights defenders. In 2019, Human Rights Watch called the situation of human rights in Azerbaijan "appalling", citing "rigid control" by the government, "severely curtailing freedoms of association, expression, and assembly", as well as "torture and ill-treatment" of journalists, lawyers, and opposition activists. According to Reporters without Borders, Azerbaijan ranks 168 of 180 countries on the Press Freedom Index. A 2020 report by the U.S. State Department accused Azerbaijan of a wide variety of human rights abuses, including "unlawful or arbitrary killing", "heavy restrictions on free expression, the press, and the internet", and "the worst forms of child labor". 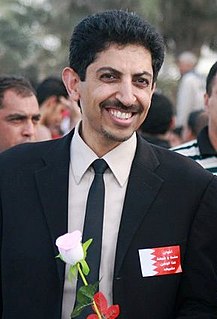 Abdulhadi Abdulla Hubail al-Khawaja is a Bahraini political activist. On 22 June 2011, al-Khawaja and eight others were sentenced to life imprisonment following the suppression of pro-democracy protests against the Bahraini government. al-Khawaja has previously gone on a series of hunger strikes while serving his life sentence, in protest of the political conditions in Bahrain.

Kamal al-Labwani is a Syrian doctor and artist, He was released from Adra Prison, near Damascus on November 15, 2011, according to state media. Before his release, Amnesty International called him a prisoner of conscience.

Dr Ammar Al-Qurabi is a Syrian human rights activist and executive director of the National Organization for Human Rights in Syria since April 2006. He was elected in April 2011 as member of the Board of Trustees of the Arab Human Rights Organization in Syria.

Tuot Saron is a Cambodian activist for the Sam Rainsy Party (SRP). He was imprisoned from 2008 to 2010 on a charge of "being an accomplice to unlawful confinement". Amnesty International called the charges against him politically motivated and named him a prisoner of conscience.

Ahmed Abdul Khaleq is a blogger and activist of the stateless Bedoun minority who formerly resided in Ajman in the United Arab Emirates. From April to November 2011, he was imprisoned as one of the UAE Five on charges of insulting United Arab Emirates President Khalifa bin Zayed Al Nahyan, Vice President Mohammed bin Rashid Al Maktoum, and Crown Prince of Abu Dhabi Mohammed bin Zayed Al Nahyan. Amnesty International designated him a prisoner of conscience, and he was released following a presidential pardon. In May 2012, he was rearrested and given a choice between indefinite detention or exile. On 16 July, he left the country for Thailand. 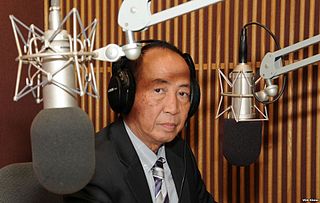 Mam Sonando is a Cambodian radio journalist and politician with French dual citizenship. He is the owner and director of Phnom Penh's Beehive Radio, which the Committee to Protect Journalists (CPJ) described in 2012 as "one of Cambodia's few independent news outlets". He also acts as a political commentator for the station.

The Bahrain Thirteen are thirteen Bahraini opposition leaders, rights activists, bloggers and Shia clerics arrested between 17 March and 9 April 2011 in connection with their role in the national uprising. In June 2011, they were tried by a special military court, the National Safety Court, and convicted of "setting up terror groups to topple the royal regime and change the constitution"; they received sentences ranging from two years to life in prison. A military appeal court upheld the sentences in September. The trial was "one of the most prominent" before the National Safety Court. A retrial in a civilian court was held in April 2012 but the accused were not released from prison. The sentences were upheld again on 4 September 2012. On 7 January 2013, the defendants lost their last chance of appeal when the Court of Cassation, Bahrain's top court upheld the sentences.

Fabián Nsue Nguema is the most prominent human-rights lawyer in Equatorial Guinea which, under Teodoro Obiang, has been referred to as one of the most repressive regimes in Africa. He is a member of Equatorial Guinea's only legal opposition party, Unión Popular (UP), which frequently denounces human rights violations, and of which he has served as secretary-general. He has defended a number of political prisoners in trials. 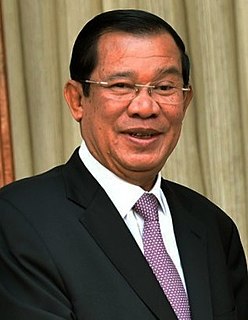 General elections were held in Cambodia on Sunday, 29 July 2018 to elect members of the sixth National Assembly. Polling stations opened at 07:00 (ICT) and closed at 15:00. The number of registered voters has decreased for the first time since 1993 and was down 13% from the 2013 general elections.

Rong Chhun is a Cambodian trade unionist and political activist. He is the president of the Cambodian Confederation of Unions and has been imprisoned several times for his work.