The Native American Chehalis people described, using their language and pronunciation, a location and village in present-day Westport, Washington that translates to American English as "place of sand" or "shifting sand". [6] Early non-native explorers of the Pacific Northwest vocalized the words as "Chehalis" and proceeded to describe the original inhabitants as such.

In 1879, the town of Saundersville, Washington, named after S.S. Saunders on whose donation land claim it was founded, began to officially use the word "Chehalis" to denote its location to the Chehalis people and the Chehalis River. The translations were also fitting for the growing town due to the muddy bottomland along the Chehalis River which had long vexed stagecoach travelers on the Washington arm of the Oregon Trail between Kalama and New Market (now Tumwater). [7]

Chehalis began as a settlement around a warehouse beside a railroad track in 1873, when the Northern Pacific Railroad built northward from Kalama to Tacoma, and ignored Claquato, then the county seat three miles to the west. [8] After the Northern Pacific bypassed Claquato, the county seat was moved to Chehalis, leaving Claquato little more than a historical landmark. By 1874, a store was added to the warehouse, and a courthouse and several houses were constructed. [9] Chehalis was incorporated on November 23, 1883. [10]

The city straddles Interstate 5 at a point almost exactly halfway between Seattle, Washington and Portland, Oregon. The historic downtown and most of the city's amenities lie on the east side of the freeway, nestled at the base of a small range of forested hills. On the west side of the freeway are parks, farms, a few subdivisions developed in the hills to the west, and a centralized shopping district, the Twin City Town Center. [13] The Chehalis–Centralia Airport (CLS) is located immediately west of the freeway towards the northern end of the city. From numerous vantage points in the hills just west of town, one can see Mount Rainier, Mount Adams, and Mount St. Helens —weather permitting. Chehalis is a frequented stop by bicyclists while on the annual Seattle to Portland Bicycle Classic.

The Chehalis River winds its way through the valley in which the city resides, and is joined by a tributary, the Newaukum River. This confluence of waters, along with the intersections of tributaries and railroads within Chehalis, helped the city become known as "The Maple Leaf City". [14] Both the Chehalis and Newaukum rivers are prone to flooding during periods of abnormally heavy or persistent rain, and the lowlands from the freeway westward are particularly susceptible to inundation. A variety of local groups, scientists, and government have organized a partnership called "The Chehalis Basin Strategy" to propose and research a combination of plans along the Chehalis River to mitigate flooding and to restore aquatic habitat for local Chinook salmon. [15] The current proposal outlines several flood control reduction measures, including levee improvements at the local airport and a flood retention dam in Pe Ell. [16]

This region experiences warm (but not hot) and dry summers, with no average monthly temperatures above 71.6 °F. According to the Köppen Climate Classification system, Chehalis has a warm-summer Mediterranean climate, abbreviated "Csb" on climate maps. [17]

Chehalis is served by a democratically elected city council of 7 members. This council selects an acting mayor from within its ranks. [20] As of March, 2020, the current mayor is Dennis Dawes, a 26-year veteran of the Chehalis police force. [21] [22]

The city is located in District 2 of Lewis County and as of June, 2020, represented by County Commissioner Bobby Jackson. [23]

Chehalis is recognized as being majority Republican and conservative, although slightly less so than Lewis County as a whole. The results for the 2016 U.S. Presidential Election for all Chehalis voting districts were as follows: [24]

Chehalis is a sister city with Inasa, Shizuoka in Japan, now merged into the city of Hamamatsu, which continues the relationship. [25]

Chehalis is considered a twin city with adjacent Centralia.

Notable trails not located within a Chehalis park include: 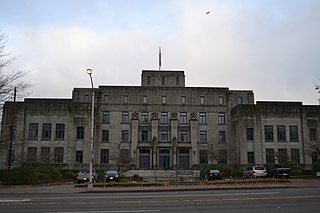 Skamania County is a county located in the U.S. state of Washington. As of the 2010 census, the population was 11,066. The county seat and largest incorporated city is Stevenson, although the Carson River Valley CDP is more populous. The county was founded in 1854 and derives its name from the Cascades Chinook word sk'mániak, meaning "swift waters". 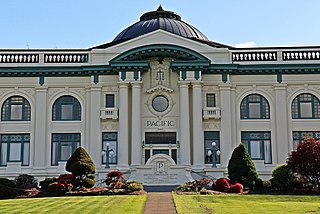 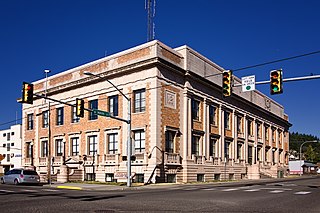 Lewis County is a county in the U.S. state of Washington. As of the 2010 census, the county's population was 75,455. The county seat is Chehalis, and its largest city is Centralia. The county was created as Vancouver County on December 19, 1845, by the Provisional Government of Oregon, named for George Vancouver. In 1849, the county name was changed, to honor Meriwether Lewis. At the time, the county included all U.S. lands north of the Cowlitz River, including much of the Puget Sound region and British Columbia. 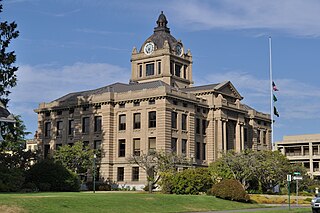 Molalla is a city in Clackamas County, Oregon, United States. The population was 8,108 at the 2010 census.

Hermiston is a city in Umatilla County, Oregon, United States. Its population of 18,415 makes it the largest city in Eastern Oregon. Hermiston is the largest, and fastest-growing, city in the Hermiston-Pendleton Micropolitan Statistical Area, the eighth largest Core Based Statistical Area in Oregon with a combined population of 87,062 at the 2010 census. Hermiston sits near the junction of I-82 and I-84, and is 7 miles south of the Columbia River, Lake Wallula, and the McNary Dam. The Hermiston area has become a hub for logistics and data center activity due to the proximity of the I-82 and I-84 interchange, Pacific Northwest fiber optic backbone, and low power costs. The city is also known for its watermelons, which are part of its branding.

Castle Rock is a city in Cowlitz County, Washington, United States. Located between the Willapa Hills and the western base of Mount St. Helens, Castle Rock is at the heart of Washington timber country in the Pacific temperate rain forest. Castle Rock is part of the Longview, Washington Metropolitan Statistical Area; the population was 1,982 as of the 2010 census. 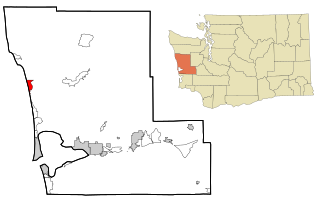 Oakville is a city in Grays Harbor County, Washington, United States. It was incorporated in 1905, with booming lumber, railway, and farming industries creating the early foundation of the community. The population was 684 at the 2010 census. 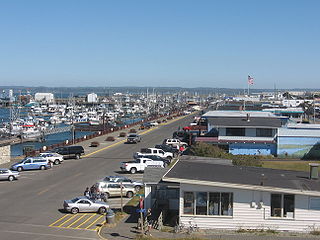 Westport is a city in Grays Harbor County, Washington, United States. The city's population was 2,099 at the 2010 census. It is located on a peninsula on the south side of the entrance to Grays Harbor from the Pacific Ocean.

North Bend is a city in King County, Washington, United States, on the outskirts of the Seattle metropolitan area. The population was 5,731 at the 2010 census and an estimated 7,136 in 2018.

Centralia is a city in Lewis County, Washington, United States. It is located along Interstate 5 near the midpoint between Seattle and Portland, Oregon. The city had a population of 16,336 at the 2010 census. Centralia is twinned with Chehalis, located to the south near the confluence of the Chehalis and Newaukum rivers. 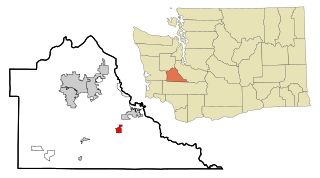 Rainier is a city in Thurston County, Washington, United States. Beginning as a train stop in the 1870s, Rainier was first settled in 1890, and was officially incorporated in 1947. The population was 1,794 at the 2010 census. 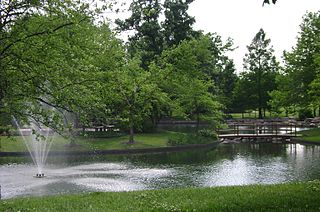 Rainbow Falls State Park is a public recreation area on the Chehalis River one mile east of the town of Dryad, Washington. The state park's 129 acres (52 ha) feature 3,900 feet (1,200 m) of shoreline, the waterfall for which the park is named, and some of the last standing old-growth trees in the Chehalis Valley.