Chen graduated from the School of Dentistry of Taipei Medical College in 1977. [2]

Ministry of Health and Welfare

At a press conference after being sworn in as the health and welfare minister on 8 February 2017,Chen said that he would continue the current policy of the ministry and would try to avoid big personnel changes. [4]

Chen flew to Geneva,Switzerland and arrived on 20 May 2017 despite the absence of invitation for Taiwan to attend the World Health Assembly in 2017. The Ministry of Foreign Affairs made the arrangement for Chen to attend bilateral meetings outside the assembly including other events,such as press conference,interviews and Taiwan Night held by non-governmental organization. [5]

Chen has become widely recognised in Taiwan as the main speaker at daily press conferences given by the Taiwan Centre for Disease Control (CDC). His approval rating in a poll released on 26 March 2020 was 91%. [6] 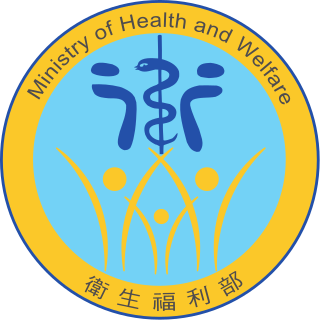 The Ministry of Health and Welfare is the Executive Yuan ministry responsible for the administration of the public health system,social welfare,affordable and universal health care,hospitals,pharmaceutical,immunization programs,disease prevention,supervision and coordination of local health agencies in Taiwan.

Chiu Wen-ta is a Taiwanese medical educator. He was the Minister of Health and Welfare of the Executive Yuan from 2011 to 2014.

Lin Tzou-yien is Taiwanese physician. He was the deputy Minister of Health and Welfare and served as acting Minister in October 2014 upon the resignation of Chiu Wen-ta. Upon the appointment of Chiang Been-huang,Lin returned to his previous post until he was promoted again to head the ministry as part of Lin Chuan's incoming cabinet,which took office on 20 May 2016. Lin was succeeded in office by Chen Shih-chung on 7 February 2017.

Chen Chin-jun is a Taiwanese politician. He was the Secretary-General of the Executive Yuan from 2007 to 2008.

Chao Shou-po is a Taiwanese politician,educator,civic activist and lawyer and a prominent leader in the World Scout Movement. He has served as a Presidium Member of the Central Advisory Committee of the Kuomintang,and has taught law at several Taiwanese universities. Chao was the President of the Asia-Pacific Regional Scout Foundation Management Committee and the Chairman of the Foundation of the Scouts of China (Taiwan). He has held many government posts including Labor Minister,Secretary-General of the Cabinet,Minister without Portfolio and Governor of the Province of Taiwan. Chao served the Ma Ying-jeou administration as senior adviser,and from 2005 to 2012 was commissioner of the Chinese Professional Baseball League. 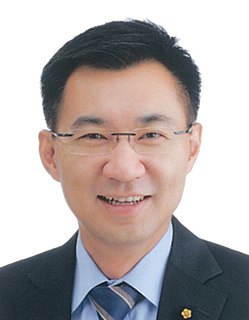 Johnny Chiang Chi-chen is a Taiwanese politician. He was the penultimate Director-General of the Government Information Office from 2010 to 2011,a post he resigned to become a member of the Legislative Yuan in which he has served since 2012. In March 2020,he was elected the Chairman of the Kuomintang and assumed office on 9 March until he was succeeded by Eric Chu on 5 October 2021.

Chiu Yi-ying is a Taiwanese politician. She has served four terms in the Legislative Yuan,one term in the National Assembly,and from 2005 to 2008 was the deputy minister of Hakka Affairs Council.

Huang Huang-hsiung is a Taiwanese politician.

Chung Chia-pin is a Taiwanese politician. He served on the National Assembly from 1996 to 2000. He was elected to the Legislative Yuan in 2016.

Huang Chao-hui is a Taiwanese politician who served on the second and sixth convocations of the Legislative Yuan. 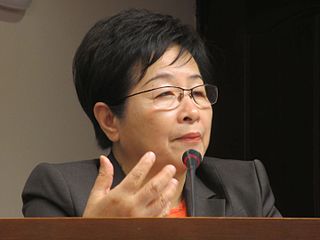 Chen Chieh-ju is a Taiwanese disability rights activist and politician who served in the Legislative Yuan from 2008 to 2016 as a member of the Democratic Progressive Party.

Chen Ou-po is a Taiwanese politician. A member of the Democratic Progressive Party,he has served in the Legislative Yuan since 2012,representing Yilan County.

Su Li-chiung is a Taiwanese politician. She served as Deputy Minister of Labor from 28 November 2017 to 29 August 2018.

The Central Epidemic Command Center is an agency of the National Health Command Center (NHCC). It has been activated by the government of Taiwan for several disease outbreaks,such as the 2009 swine flu pandemic and the COVID-19 pandemic. The head of the agency is Chen Shih-chung,the minister of Health and Welfare. The CECC is associated with the Taiwan Centers for Disease Control.