Chetham's Library in Manchester, England, is the oldest free public reference library in the United Kingdom. [1] Chetham's Hospital, which contains both the library and Chetham's School of Music, was established in 1653 under the will of Humphrey Chetham (1580–1653), for the education of "the sons of honest, industrious and painful parents", [1] and a library for the use of scholars. The library has been in continuous use since 1653. It operates as an independent charity, [2] open to readers free of charge, Monday-Friday 09.00-12.30 and 13.30-16.30 by prior appointment. Tours of the Library for visitors are bookable online from 2 September 2019 via the Library website. [3]

The library holds more than 100,000 volumes of printed books, of which 60,000 were published before 1851. They include collections of 16th- and 17th-century printed works, periodicals and journals, local history sources, broadsides and ephemera.

One of the most substantial collections pertains to Belle Vue Zoo and Gardens, Manchester's most renowned entertainment attraction and zoological center, in operation from the 1830s to the 1980s. [7] The collection contains thousands of posters, programmes and photographs, as well as the financial and business papers of the owner, John Jennison; large numbers of items in this collection are available in digitised form online. [8] A 2014 grant of £45,000 obtained by Chetham's Library allowed curators to make the collection available to online users, via digitization projects. [7]

Catalogues of printed items and of archives and manuscripts held at Chetham's Library are provided online. [9]

The manor house of the Lord of the Manor, in the centre of the medieval town of Manchester, stood on a sandstone bluff, at the confluence of the River Irwell and the River Irk. In 1421 the rector of the parish church, Thomas de la Warre (Lord of the manor of Manchester), obtained a licence from Henry V to refound the church as a collegiate foundation. He donated his manor house for use as the college of priests' buildings for the collegiate church (later to be the cathedral). There was accommodation for the warden, eight fellows, four clerks, and six choristers.

The Manchester Free Grammar School for Lancashire Boys was built between the church and the college buildings between 1515 and 1518. The college was dissolved in 1547 by the Chantries Act and sold to the Earl of Derby. It was re-founded as a catholic foundation by Queen Mary and again disbanded by Protestant Queen Elizabeth I. In 1578 the collegiate church was re-founded by charter as Christ's College and re-occupied by the warden and fellows. In the Civil War it was used as a prison and arsenal.

In 1653 the college buildings were bought with the bequest of Humphrey Chetham, for use as a free library and blue coat charity school. At that time there was no facility for independent study in the north of England and Chetham's will of 1651 had stipulated that the Library should be "for the use of schollars and others well affected", and instructed the librarian "to require nothing of any man that cometh into the library". [10] The twenty four feoffees appointed by Humphrey Chetham set out to acquire a major collection of books and manuscripts that would cover the whole range of available knowledge and would rival the college libraries of Oxford and Cambridge. [10] In order to protect the newly acquired books from rising damp the Library was housed on the first floor and, in accordance with the provisions of Chetham's will, the books were chained to the presses (bookcases). [10] Twenty-four carved oak stools with 'S'-shaped hand-holds (which are still in use) were provided as seats for readers. [10]

In 1718 the feoffees offered the Manchester poet and inventor of a system of shorthand, John Byrom, the post of Library Keeper. Byrom, who was an avid collector of books, declined the offer but after his good friend, Robert Thyer, became Librarian in 1732, frequently acted as an agent for the library, purchasing books at London auctions. [11] Byrom's library, which included the manuscript of his poem "Christmas Day" (which became the Christmas carol, "Christians Awake") and some 2,800 printed books, was presented to the library by his descendant, Eleanora Atherton, in 1870. [11]

The books were originally uncatalogued and placed in the presses in size order. The first catalogue wasn't produced until 1791, and then was written in Latin and only listed the size and subject of each book. [10] The practice of chaining the books was abandoned in the mid eighteenth century when gates were erected to prevent theft. [10]

Chetham's was the meeting place of Karl Marx and Friedrich Engels when Marx visited Manchester in the summer of 1845. Facsimiles of the economics books they studied can be seen on a table in the window alcove where they would meet. The research they undertook during this series of visits to the library led ultimately to their work, The Communist Manifesto . Therefore, the library acts as a site of historical importance for visiting communists. [12]

Additions were made to the buildings by J. E. Gregan (1850s), Alfred Waterhouse (1878) (grade II listed), and J. Medland Taylor (1883–95). Manchester Grammar School was extended along Long Millgate in 1870. Manchester Grammar School moved to Fallowfield in the 1930s, and after standing empty for many years the original building was destroyed during the Second World War, leaving only its new block. This became part of Chetham's School of Music in 1978. The old college building, which became the music school in 1969, still incorporates Chetham's Library and is Grade I listed. 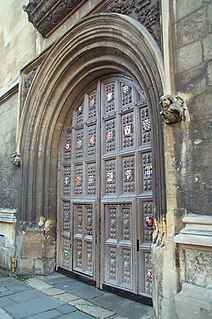 The Bodleian Library is the main research library of the University of Oxford, and is one of the oldest libraries in Europe. With over 12 million items, it is the second-largest library in Britain after the British Library. Under the Legal Deposit Libraries Act 2003 it is one of six legal deposit libraries for works published in the United Kingdom, and under Irish law it is entitled to request a copy of each book published in the Republic of Ireland. Known to Oxford scholars as "Bodley" or "the Bod", it operates principally as a reference library and, in general, documents may not be removed from the reading rooms. 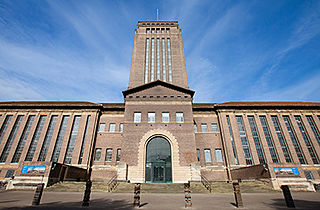 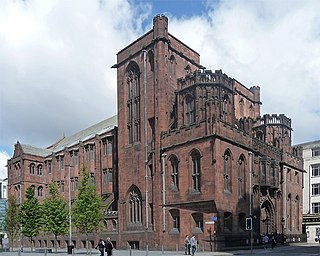 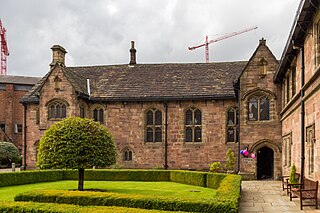 Humphrey Chetham was an English textile merchant, financier and philanthropist, responsible for the creation of Chetham's Hospital and Chetham's Library, the oldest public library in the English-speaking world.

Under the feudal system in England, a feoffee was a trustee who holds a fief, that is to say an estate in land, for the use of a beneficial owner. The term is more fully stated as a feoffee to uses of the beneficial owner. The use of such trustees developed towards the end of the era of feudalism in the middle ages and became obsolete with the formal ending of that social and economic system in 1660. Indeed the development of feoffees to uses may have hastened the end of the feudal system, since their operation circumvented vital feudal fiscal mechanisms.

The Clockmakers’ Museum in London, England, is believed to be the oldest collection specifically of clocks and watches in the world. The collection belongs to and is administered by the Clockmakers’ Charity, affiliated to the Worshipful Company of Clockmakers, founded in 1631 by Royal Charter. Since 2015 it has been housed in a gallery provided by the Science Museum in South Kensington, having formerly been located in the Guildhall complex in the City of London since 1874, where it first opened to the public. Admission is free.The formation of the collection dates back to 1814. The principal goal of the museum is to educate the public about the history of the field of clock and watchmaking (horology), principally in the City of London, and also to promote education and career possibilities in the craft of horology, which as of 2019 was placed on the HCA Red List of Endangered Crafts. The Archive of the Clockmakers is managed on its behalf by the London Metropolitan Archive and is located at Guildhall Library, where the Library collection of printed books is also held and managed.

Thomas Jones was a Welsh librarian, who was librarian of Chetham's Library in Manchester from 1845 to 1875.

Sir Arthur Ernest Cowley, was a British librarian who was Bodley's Librarian from 1919 until a couple of months before his death. He was also a leading Semitic scholar.

Henry Brooke was an English schoolmaster and cleric.

John Clayton (1709–1773) was an English clergyman, an early Methodist, and Jacobite supporter.

Richard Hollinworth (1607–1656) was an English clergyman of presbyterian views, an influential figure in North-West England in the 1640s. 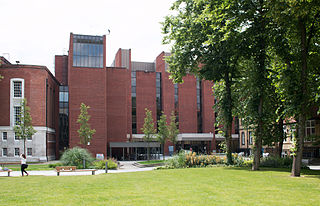