Chhetri (Kshetri, Kshettri, Kshetry or Chhettri), (Nepali : क्षेत्री; IPA:  [kʃet̪ri] , or [tsʰet̪ri] ; IAST: Kṣetrī) historically called Kshettriya or Kshetriya or Khas are Nepali speakers of Khas community some of whom trace their origin to migration from medieval India. [4] [5] Chhetri was a caste of administrators, governor and military elites in medieval Khas Kingdom and Gorkha Kingdom (later unified Kingdom of Nepal). [6] The nobility of Gorkha Kingdom were mainly based from Chhetri families and they had a strong presence in civil administration affairs. [7] The bulk of Prime Ministers of Nepal before democratization of Nepal belonged to this caste as a result of old Gorkhali aristocracy. Gorkha-based aristocratic Chhetri families were Pande dynasty, Basnyat dynasty, Thapa dynasty and Kunwars (Rana dynasty & other Kunwars).

Khas Chhetris were traditionally considered a division of the Khas people with Khas Brahmin (commonly called Khas Bahun). [8] They make up 16.6% of Nepal's population according to the 2011 Nepal census, making them the most populous caste or ethnic community in Nepal. [1] Chhetris speak an Indo-Aryan Nepali language ( Khas-Kura ) as mother tongue. [2] [4]

Chhetri is considered a direct derivative of the Sanskrit word Kshatriya . [9] [10] According to the 1854 Legal Code (Muluki Ain) of Nepal, Chhetris are the social group among the sacred thread bearers (Tagadhari) and twice-born people of the Hindu tradition. [11] [12] Almost all Chhetris are Hindu. [3]

They are thought to be connected to the Khasas mentioned in the ancient Indian literature and the medieval Khasa kingdom. [13]

In the early modern history of Nepal, Chhetris played a key role in the Unification of Nepal, providing the core of the Gorkhali army of the mid-18th century. [14] Bir Bhadra Thapa was a Thapa of Chhetri group [15] and leading Bharadar during Unification of Nepal. [16] His grandson Bhimsen Thapa became Mukhtiyar (Prime Minister) of Nepal. [16] Swarup Singh Karki, a leading politician and military officer, belonged to Chhetri family. [17] Abhiman Singh Basnyat of Basnyat dynasty and Damodar Pande of Pande dynasty were both members of Chhetri caste. [18] Jung Bahadur Rana, founder of Rana dynasty also belonged to the Chhetri community. [19]

During the monarchy, Chhetris continued to dominate the ranks of the Nepalese government, Nepalese Army, Nepalese Police and administration. [14]

The most prominent feature of Nepalese Chhetri society has been the ruling Shah dynasty (1768–2008) [note 1] , the Rana Prime Ministers (1846–1953), Pande family, Thapa family, Basnyat family,. [7] that marginalized the monarchy, and the Chhetri presence in the armed forces, police, and Government of Nepal. In traditional and administrative professions, Chhetris were given favorable treatment by the royal government. [21] [22]

The nobility of Gorkha were mainly from Chhetri families and they had a strong presence in civil administration affairs. [7] All of the Prime Minister of Nepal between 1768 and 1950 were Chhetris with the exception of Ranga Nath Poudyal, being a Brahmin. [23] These number varied after the democratization of Nepal. Between 1951 and 1997, out of the 16 Prime Ministers of Nepal, 5 of them were Chhetris. [24]

Chhetri had dominated high military positions and monopolized the military force at the times of Chhetri autocratic administrators like PM Bhimsen Thapa and PM Jung Bahadur Rana. There were 12 Basnyats, 16 Pandes, 6 Thapas and 3 Kunwar officers totalling to 51 Chhetri officers in the year 1841  A.D. [19] The most prominent officers at Shah administration were the Kazis which had control over civil and military functions like a Minister and Military officer combined. Rana Jang Pande, the leader of Pande faction, was the Prime Minister of Nepal in 1841  A.D. [25] which might have caused large Pande officers at 1841. After the rise Rana dynasty(Kunwars), the number changed to 10 Basnyats, 1 Pandes, 3 Thapas and 26 Kunwar officers totaling to 61 Chhetri officers in the year 1854  A.D. [19]

Clans of the Chhetri include: [27]

The 2011 Nepal census recorded Chhetris as the largest Hindu adherents in the nation with 43,65,113 people which is 99.3% of total Chhetri population. [1] Those Chhetri who follow Hinduism may also follow Buddhism. The ancient religion of the Chhetri is Masto which uses nature worship and can still be seen in western Nepal's Karnali district and in India's Gorkhaland. In Nepal's hill districts the Chhetri population rises to 41% compared to 31% Brahmin and 27% other castes. This greatly exceeds the Kshatriya portion in most regions with predominantly Hindu populations. [28] [29]

As per the Public Service Commission of Nepal, Brahmins (33.3%) and Chhetris (20.01%) were two largest caste group to obtain governmental jobs in the fiscal year 2017-18 even though 45% governmental seats are reserved for women, Madhesis, lower caste and tribes, people with disability and those from the backward regions. [30]

Chhetri together with Bahun and thakuri falls under Khas Arya, who are denied quota and reservations in civil services and other sectors due to their history of socio-political dominance in Nepal. [31] There are no quotas for the Khas community who fall under Bahun-Chhetri-thakuri hierarchy. [32] As per the explanation of legal provisions of Constitution of Nepal, Khas Arya comprises the Brahmin, Kshetri, Thakur and Sanyasi (Dashnami) communities. [33] But they are allowed reservation in federal parliament and provincial legislature. [34] The European Union has been accused of direct interference, creating ethnic strife and negative discrimination towards Khas Arya due to their recommendation to remove the reservation for Khas Aryas. [35] [34]

Khas Tribe also called Khas are a ethno-linguistic group Indegeneous native of the Northern Indian subcontinent, what is now present-day Nepal and Indian states of Uttarakhand (Kumaon-Garhwal), Himachal Pradesh and Jammu and Kashmir, Sikkim, Assam, and Kashmir. The Khas people are known as Indo-European or Aryans who created Hinduism and wrote vedas that are piller of Hinduism speak the Khas language.or Gorkhali, They are also known as Parbatiyas, Parbates and Paharis/Pahades or Gorkhali. These people have R1A and R1B y DNA haplogroup. The term Khas Arya has now become obsolete, as the Khas Arya people have adopted communal identities such as Bahun, Thakuri and Chhetri because of the negative stereotypes associated with the term Khas or khas Aryan.

Rana dynasty is a Chhetri dynasty that ruled the Kingdom of Nepal from 1846 AD until 1951 AD, reducing the Shah monarch to a figurehead and making Prime Minister and other government positions held by the Ranas hereditary. They claimed Kshatriya status themselves. Rana dynasty is historically known for the iron-fisted rule. This changed after the Revolution of 1951 with the promulgation of a new constitution, when power shifted back to the monarchy of King Tribhuvan.

Kaji was a title and position used by nobility of Gorkha Kingdom (1559–1768) and Kingdom of Nepal between 1768–1846. Many other contemporary kingdoms used the same title for their ministers.

Kaji Pratha is the honorary hereditary practice that originated from medieval period in Nepal. After Shri Paanch Bada Maharaj Dhiraj Prithvi Narayan Shah completed the "Greater Nepal", he honored few families with the hereditary title of "Kaji" such as Kunwar family, Basnyat family, Pande family, Thapa family ,Khadka Family and also to few Bhandaris, Rayamajhi and Karkis with such respectful designation. Still Today Kaji surname is used By many Khas Kshetriya of Nepal like Thapa, Basnet, Kunwar, Khadka and many more to show them superior than other Khas Bahun Chhetri and Khatri of Nepal. 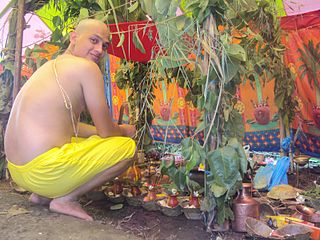 Bahun or Khas Brahmin is a caste (Varna) among Khas people, whose origins are from Indo-Aryans of Nepal. According to the 2011 Nepal census, Bahun is the second most populous group after Chhetri in Nepal.

Thapa Kaji is a large social group of people of Chhettri caste in Nepal. Thapas of Uttrakhand And Himanchal State of India are considered as Pahari Rajput. Over a period of time, this community has spread to many parts of the world. The surname originated during the Khas Kingdom in Karnali region during middle age-it referred to a position/post of a warrior. Chhetri is considered a derivative form of the Sanskrit word Kshatriya.

Nain Singh Thapa or Nayan Singh Thapa was a Nepalese Kaji (minister) and a military general. He died in the offensive campaign of Kangra from bullet injury. He was the owner of the Thapathali Durbar temple complex.

Ram Krishna Kunwar or Ramakrishna Kunwar was military commander (Sardar) of Gorkha Kingdom during the Unification of Nepal at the reign of King Prithvi Narayan Shah. He was born circa 1728 AD to Ashiram Kunwar in the Kunwar family. His descendants went on to found the Rana dynasty of Nepal. He was successful general in the Unification campaign of Nepal of King Prithvi Narayan Shah. He defeated British forces at Hariharpur Gadhi on 25 August 1767. He died in Mechi Campaign in 1771 A.D.

'Bisht is a family name of people of Nepal belonging to Khas people group under the caste Chhetri, sub-groups of Kshatriya varna. They are Hindu with a local Masto deity. They speak Nepali language as mother tongue. In India Bista/Bistas are spelled as Bisht/Bishts or Bist/Bists and are titled as Rajputs. They are mostly found in Indian state of Uttarakhand. 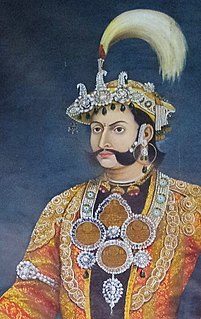 Thapa dynasty or Thapa noble family was a Kshatriya (KHASAS-ChhetriHillRajput) political family that handled Nepali administration affairs between 1806 and 1837 A.D. and 1843 to 1845 A.D. as Mukhtiyar. This was one of the four noble families to be involved in the active politics of the Kingdom of Nepal, along with the Shah dynasty, Basnyat family, and the Pande dynasty before the rise of the Rana dynasty. At the end of 18th century, Thapas had extreme dominance over Nepalese Darbar politics alternatively contesting for central power against the Pande family. Bir Bhadra Thapa was a Thapa of Chhetri group and leading Bharadar during Unification of Nepal. His grandson Bhimsen Thapa became Mukhtiyar of Nepal and established Thapa dynasty to the dominating position of central court politics of Nepal. 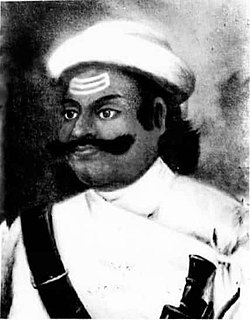 The Pande family or Pande dynasty was a Kshatriya (Rajput-Chhetri) political family that directly ruled Nepali administration affairs since the 16th century to 19th century as Mulkaji and Mukhtiyar. This dynasty/family was one of the four noble family to be involved in active politics of Nepal together with Shah dynasty, Basnyat family and Thapa dynasty before rise of Rana dynasty. Pande dynasty is the oldest noble family to hold the title of Kaji. This family was decimated from political power in 1843 CE from the political massacre conducted by Prime Minister Mathabar Singh Thapa as a revenge for his uncle Bhimsen's death in 1839.

Mulkaji was the position of head of executive of Kingdom of Nepal in the late 18th and early 19th centuries. It was equivalent to Prime Minister of Nepal. There were 5 Mulkajis appointed between 1785 and 1804.

The Kunwar family or Kunwor family or Kanwar family was a noble dasnami family in the Gorkha Kingdom and the Kingdom of Nepal. Kunwars were linked to the Thapa dynasty and family of Amar Singh Thapa by marital lineages and, thus, to Pande dynasty through the Thapa dynasty. Two branches of the Kunwars; Ramakrishna and Jayakrishna, were formed with opposite political aspirations. Bal Narsingh Kunwar supported Mukhtiyar Bhimsen Thapa while Chandrabir Kunwar supported Bada Kaji Amar Singh Thapa due to their marital relations with those families. Later, the Ramakrishna section of the family established the Rana dynasty of Nepal and styled themselves as Rana Rajputs while Jayakrishna section remained as Kunwars.

Rajputs of Nepal or anciently Rajputras are Rajput community of Nepal. As per the 2011 Nepal census, the population of Rajputs is reported at 41,972.