The chief public health officer of Canada (CPHO; French : administratrice en chef de la santé publique; ACSP) [note 1] is the lead health professional and primary spokesperson on public health related matters for the Government of Canada. The chief public health officer provides advice to the minister of health and the president of the Public Health Agency of Canada (PHAC), works in collaboration with the agency president in the agency's leadership and management, and works with other departments and levels of government on public health matters. PHAC, along with the CPHO post was established in 2004 amidst the SARS crisis. [1]

The third and current chief public health officer of Canada is Theresa Tam, who was appointed in June 2017. [2]

The CPHO is selected through an open and transparent national competitive process, and is appointed by the Governor-in-Council. [5] The process is merit-based: as per the Public Health Agency of Canada Act, the CPHO must be a qualified public health professional. [6]

The CPHO is responsible for: [7]

During public health emergencies, such as outbreaks or natural disasters, the CPHO is responsible for:

The chief public health officer was the head of the Public Health Agency of Canada until 2014, in which government of Prime Minister Stephen Harper reorganized the management structure of PHAC through a 2014 omnibus budget bill and instituted a parallel presidential-structure and position to govern the organization, that then could be staffed by non-medical and non-scientific personnel. The NDP health critic said at the time that: "To bury it in an omnibus bill says to me that they don't want people to know about it and they don't want questions," while Health Minister Rona Ambrose said that "the idea for the new structure came from the agency itself," which was led at the time on an interim basis for the previous 16 months by Gregory W. Taylor. [8]

Theresa Tam, who has held the position since 26 June 2017, released a vision statement in early 2018. [9] She wishes to pay particular attention to the reduction of health discrepancies in the country, which includes collaborating with and reducing the socioeconomic gap of Indigenous Peoples. Her six areas of focus are currently: [10]

As CPHO, Tam wrote Fifteen years post-SARS: Key milestones in Canada's public health emergency response, in which she remarked somewhat presciently as it turns out that: [11]

Theresa Tam is the third and present CPHO. Initially taking on the role in an acting capacity on December 16, 2016 following the retirement of Gregory Taylor, [2] Tam was formally appointed on June 26, 2017, [2] and led the Government of Canada's COVID-19 response in 2020.

Health Canada is the department of the Government of Canada responsible for national health policy. The department itself is also responsible for numerous federal health-related agencies, including the Canadian Food Inspection Agency (CFIA) and the Public Health Agency of Canada (PHAC), among others. These organizations help to ensure compliance with federal law in a variety of healthcare, agricultural, and pharmaceutical activities. This responsibility also involves extensive collaboration with various other federal- and provincial-level organizations in order to ensure the safety of food, health, and pharmaceutical products—including the regulation of health research and pharmaceutical manufacturing/testing facilities.

The minister of health is the minister of the Crown in the Canadian Cabinet who is responsible for overseeing health-focused government agencies including Health Canada and the Public Health Agency of Canada, as well as enforcing the Canada Health Act, the law governing Canada's universal health care system. The current minister is Patty Hajdu.

The Canadian Food Inspection Agency is a regulatory agency that is dedicated to the safeguarding of food, plants, and animals (FPA) in Canada, thus enhancing the health and well-being of Canada's people, environment and economy. The agency is governed by the Minister of Agriculture and Agri-Food and Minister of Health.

The Public Health Agency of Canada is an agency of the Government of Canada that is responsible for public health, emergency preparedness and response, and infectious and chronic disease control and prevention.

David Butler-Jones is a Canadian physician and public servant who served as the 1st chief public health officer of Canada from the position's formation on October 23, 2004 to June 2013. The chief public health officer was the head of the Public Health Agency of Canada (PHAC) until the 2014 omnibus budget bill, in which the 28th Canadian Ministry of Stephen Harper decided to reorganize the management structure of PHAC and institute a parallel Presidential structure to govern the organization that then could be staffed by non-medical and non-scientific personnel.

The Global Public Health Intelligence Network (GPHIN) is an electronic public health early warning system developed by Canada's Public Health Agency, and is part of the World Health Organization's (WHO) Global Outbreak Alert and Response Network (GOARN). This system monitors internet media, such as news wires and websites, in nine languages in order to help detect and report potential disease or other health threats around the world. The system has been credited with detecting early signs of the 2009 swine flu pandemic in Mexico, Zika in West Africa, H5N1 in Iran, MERS and Ebola.

Patricia A. Hajdu is a Canadian Liberal politician who was elected to represent the riding of Thunder Bay—Superior North in the House of Commons of Canada in the 2015 federal election. Since November 2019, she has been the Minister of Health in the federal Cabinet. Previous to this, she was the Minister of Status of Women and Minister of Employment, Workforce Development and Labour. 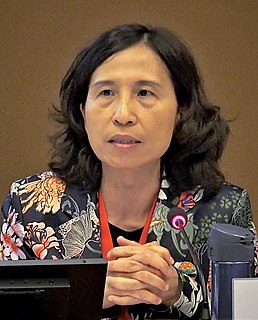 Theresa Tam is a Canadian physician and public servant who currently serves as the 3rd chief public health officer of Canada. Tam initially took the role following the retirement of her predecessor, Gregory Taylor, on December 16, 2016. She was formally appointed on June 26, 2017.

Michael Norman Rouleau is a Canadian Forces officer serving as a lieutenant-general in the Canadian Army. He was the vice chief of the Defence Staff from July 15, 2020 until March 9, 2021. 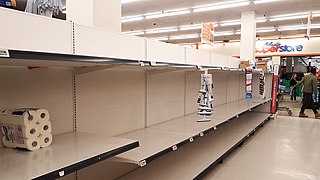 The COVID-19 pandemic in Canada is part of the ongoing worldwide pandemic of coronavirus disease 2019 caused by severe acute respiratory syndrome coronavirus 2. The virus was confirmed to have reached Canada on January 27, 2020, after an individual who had returned to Toronto from Wuhan, Hubei, China, tested positive.

Deena Hinshaw has been the Chief Medical Officer of Health for the province of Alberta since January 28, 2019. She has been providing daily updates on the COVID-19 pandemic in Alberta to the public and recommendations to Jason Kenney, the Premier of Alberta and the Emergency Management Cabinet Committee.

Bonnie HenryMD, MPH, is a Canadian physician who is the Provincial Health Officer for British Columbia, the first woman in this position. Henry is also a clinical associate professor at the University of British Columbia. She was a family doctor and is a specialist in public health and preventive medicine.

The Quarantine Act, 2005 is an act of the Parliament of Canada, which regulates the use of quarantine to prevent the introduction and spread of communicable diseases. Introduced in the aftermath of the 2002–04 SARS outbreak, the act grants the ability to designate quarantine facilities, require health screenings upon arrival or exit of the country, and issue emergency orders that impose conditions or prohibitions on the entry of individuals or imports in order to prevent the spread of communicable diseases. It also imposes fines on those who disobey quarantine officers or quarantine orders.

Gregory W. Taylor is a Canadian physician and public servant who served as the 2nd chief public health officer of Canada from September 24, 2014 until his retirement on December 16, 2016.

The National Emergency Stockpile System (NESS) is a federal Government of Canada response to the needs of the health care system in case of an emergency. It is a responsibility of the Public Health Agency of Canada (PHAC).

The National Antiviral Stockpile (NAS) is a federal Government of Canada response to the needs of the health care system in case of an emergency. It is a responsibility of the Public Health Agency of Canada (PHAC). 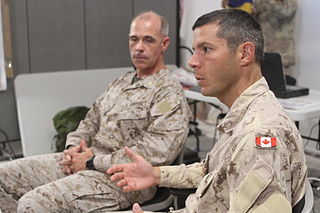 Dany Fortin is a Canadian Forces officer serving as a major general in the Canadian Army. He has served as the Public Health Agency of Canada's (PHAC) vice president of logistics and operations since November 27, 2020, leading the federal government's COVID-19 vaccine rollout. He has served in commanding roles in the War in Afghanistan and the ISIL insurgency in Iraq. He commanded the 1st Canadian Division Headquarters and also served in a foreign exchange billet as the Deputy Commanding General for I Corps of the United States Army.