Chilanga is a township located 20 km south of Zambia's capital city, Lusaka. It is situated midway between Lusaka and Kafue on the Great North Road. [1]

Like most Zambian towns, Chilanga was historically a colonial settlement and the home of European expatriates. After Zambia gained independence from the United Kingdom in 1964, most white settlers left, and local residents took over the land. By the beginning of the 1980s, almost all of Chilanga was resettled by African Zambians. Before 2011, Chilanga was a suburb and constituency of Kafue District [2] [3] (although it was widely known as being part of Lusaka). In 2011, the president of Zambia, Michael Sata, made Chilanga its own town and district. [2] [3] Chilanga District covers the area separating Lusaka from Shibuyunji District as well as the area in between Lusaka and Kafue along the Great North Road, where the town centre is located. [4]

Since colonial times, Chilanga has grown in size and population due to new businesses, commercial farming, small farm holding settlements, and housing plots. Water supply is still a challenge for most settlers as the land is hilly and rocky and there is not a large enough municipal supply system to cater for the increased demand. Boreholes are common. Formerly government-owned houses are now privately owned as they and other government buildings around Zambia were sold in the mid 1990s. Since then, much construction has taken place.[ citation needed ]

Kafue Road (T2) runs through the center of Chilanga. Once a quiet and rarely used two-lane road, it has now become a busy four-lane thoroughfare. A large volume of truck traffic moves through the town on a daily basis, including very large shipments travelling to the mines in Copperbelt Province in the north. It is the main trunk road connecting Zambia with Zimbabwe through either Chirundu or Victoria Falls via the T1 through Livingstone. North of Lusaka, the T2 becomes the Great North Road, connecting southern Africa to central and eastern Africa.[ citation needed ]

Traditionally, Chilanga is administered by one chiefdom. It is the home of the Soli people under chieftains Nkomesha Mukamambo II, it is for this reason that Soli is remains the indigenous tribe of the district. [5] However, because Chilanga is a transitional area between Lusaka Province and Southern Province, both Tonga and Nyanja Bantu languages are spoken and understood, although, as with most of Zambia, many other tribal languages are also used. English is the official language of Zambia, and most people in Chilanga can communicate in English.[ citation needed ]

Travelling away from the centre of town, most of the land in Chilanga is used for sustenance agriculture. The areas away from the Great North Road are similar to most Zambian villages, with basic shelter for homes, and large maize fields surrounding them.[ citation needed ]

The Kafue River is the longest river lying wholly within Zambia at about 1,576 kilometres (979 mi) long. Its water is used for irrigation and for hydroelectric power. It is the largest tributary of the Zambezi, and of Zambia's principal rivers, it is the most central and the most urban. More than 50% of Zambia's population live in the Kafue River Basin and of these around 65% are urban.

Kafue is a town in the Lusaka Province of Zambia and it lies on the north bank of the Kafue River, after which it is named. It is the southern gateway to the central Zambian plateau on which Lusaka and the mining towns of Kabwe and the Copperbelt are located. It is located on the T2 Road. 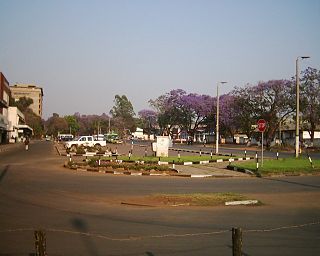 Ndola is the third largest city in Zambia and third in terms of size and population, with a population of 475,194, after the capital, Lusaka, and Kitwe, and the second largest in terms of infrastructure development. It is the industrial and commercial center of the Copperbelt, Zambia's copper-mining region, and capital of Copperbelt Province. It lies just 10 kilometres (6.2 mi) from the border with DR Congo. It is also home to Zambia's first modern stadium, the Levy Mwanawasa Stadium.

Kafue National Park is the largest national park in Zambia, covering an area of about 22,400 km². It is one of the largest parks in Africa and is home to 152 different species of mammals.

Mongu is the capital of Western Province in Zambia and was the capital of the formerly-named province and historic state of Barotseland. Its population is 179,585, and it is also the headquarters of Mongu District.

The Lochinvar National Park lies south west of Lusaka in Zambia, on the south side of the Kafue River.

The Great North Road is a major route in Zambia, running north from Lusaka through Kabwe, Kapiri Mposhi, Serenje, Mpika, Kasama, Mbala and Mpulungu. 82km North of Mpika is a signposted right turn onto a well maintained gravel road leading to Shiwa Ng'andu (12km) and Kapishya Hot Springs (32km). The road from Zambia's border with Zimbabwe at Chirundu to Lusaka is now regarded as being part of the Great North Road; but this is only since the opening of the Chirundu Bridge in 1939 - before that, the Great North Road ran from Livingstone to Lusaka, as part of the original Cape to Cairo Red Line by Cecil John Rhodes. The portion from Mbala to Mpulungu could be regarded as a spur linking to the Lake Tanganyika steamer service which was popular with travellers up to the 1950s. 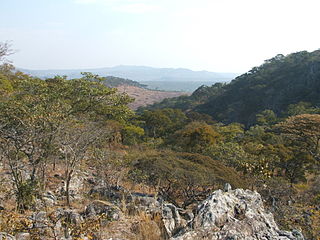 Central Province is one of Zambia's ten provinces. The provincial capital is Kabwe, which is the home of the Mulungushi Rock of Authority. Central Province has an area of 94,394 km (58,654 mi). It borders eight other provinces and has eleven districts. The total area of forest in the province is 9,095,566 ha, and it has a national park and three game management areas. The first mine in the region was opened up in 1905 making the then Broken Hill town the first mining town. In 1966, he town's name was reverted to its indigenous name - Kabwe meaning 'ore' or 'smelting'. 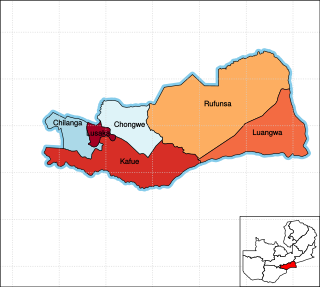 Lusaka Province is one of the ten provinces of Zambia. Its capital is Lusaka, which is also the national capital. It is the smallest province in Zambia, with an area of 21,896 km2. Lusaka is also Zambia's most populated and most densely populated province, with a population of 2,191,225 and density of 100 persons per km2 as of 2010. It is the most urban province, with the most doctors and fewest malaria-related incidents. The province is bordered by Zimbabwe and Mozambique, and separated by the Lower Zambezi National Park.

The Kafue Flats are a vast area of swamp, open lagoon and seasonally inundated flood-plain on the Kafue River in the Southern, Central and Lusaka provinces of Zambia. They are a shallow flood plain 240 km long and about 50 km wide, flooded to a depth of less than a meter in the rainy season, and drying out to a clayey black soil in the dry season.

Chilanga Cement is a company of Zambia. Chilanga is principally a cement company, producing cement and cement clinker. The company also sales aggregates from a quarry it operates in Chilanga. The company is headquartered in Chilanga (Lusaka), Zambia which is close to Lusaka, the national capital. 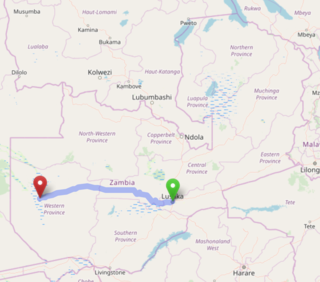 The Lusaka–Mongu Road of Zambia runs 580 km from the capital, Lusaka, to Mongu, capital of the Western Province. It connects that province to the rest of the country, as well as being one of two routes to the south-west extremity of North-Western Province. It also serves as the main highway of the western half of Central Province. The entire route from Lusaka to Mongu is designated as the M9 Road.

Lusaka is the capital and largest city of Zambia. It is one of the fastest-developing cities in southern Africa. Lusaka is in the southern part of the central plateau at an elevation of about 1,279 metres (4,196 ft). As of 2019, the city's population was about 3.3 million, while the urban population is estimated at 2.5 million in 2018. Lusaka is the centre of both commerce and government in Zambia and connects to the country's four main highways heading north, south, east and west. English is the official language of the city administration, while Nyanja and Bemba are the commonly spoken street languages.

Rufunsa District is a district in Zambia, located in Lusaka Province. The district capital is Rufunsa. The district was established by President Michael Sata in 2012 by splitting Chongwe District. It is estimated to have a population of about 45,000. 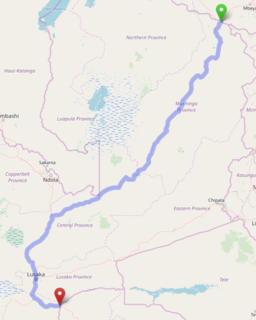 The T2 is a trunk road in Zambia. The road runs from the Tunduma border with Tanzania via Mpika, Kabwe and Lusaka to the Chirundu border with Zimbabwe. The road is the longest route of the country, as it is approximately 1,155 kilometres (718 mi). The entire route is a toll road.

The T3 is a Trunk Road in Zambia. The road runs from Kapiri Mposhi via Ndola, Kitwe and Chingola to Kasumbalesa on the border with DR Congo. The entire route is a toll road.

Chilanga District is a district of Lusaka Province, Zambia. The capital of the district is Chilanga. It was separated from Kafue District in 2012. 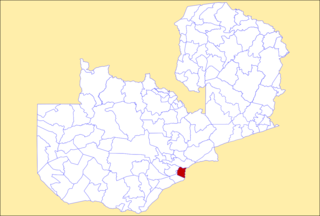 Chirundu District is a district of Southern Province, Zambia. Its headquarters is Chirundu. It was separated from Siavonga District by President Michael Sata in 2012.