Finnish-Chinese relations are the foreign relations between Finland and China.

Along with Sweden and Denmark, Finland was one of the first Western countries to recognize the People's Republic of China and form diplomatic relations with the country in 1950. [1] The embassy in Beijing was opened in April 1952, and the first resident Finnish ambassador to China, Helge von Knorring, presented his letter of credence to Mao Zedong on 9 May 1952. [1]

Later that same year, an economic department headed by Olavi J. Mattila was opened at the embassy to foster the development of trade relations. As a consequence, Finland became the first capitalist country to sign a bilateral trade agreement with the People's Republic of China in 1953. [1]

These steps, as well as Finland's staunch support for PRC's membership in the UN, formed a solid basis to the nations' relations well into the 1980s. [1] Since the early 1990s, there has been at least one official minister-level state visit from Finland to China each year. [1]

Finland and China have had an agreement on economic, industrial, scientific and technological co-operation since 1973, and the agreement was last revised in 2005. [1] The two principal trade organizations between the countries are Finland-China Trade Association and the China Council for Promotion of International Trade (CCPIT).

One of the fastest growing areas of trade between the two countries is in environmental protection and information technology. [3]

Linux, the open source code first developed by Finnish software engineer Linus Torvalds, is playing a major role in the development of China's IT sector – and in the country's rapid industrial development as a whole. Researcher, investor and open source code promoter Mikko Puhakka believes that Linux has established a good foundation for Finnish-Chinese cooperation.

The first Linux server was started in May 1997 in Changzhou. Its domain name was cLinux.ml.org. Today a local distribution of Linux, the Red Flag Linux, is a compulsory subject in 1,000 Chinese universities by 2008. The Chinese view open source code as a critical factor in the country's development.

Nokia is the largest Finnish investor in China.

During the Coronavirus crisis, on 8 April 2020, Finland reported that 2 million surgical masks and 230,000 respirator masks it had purchased from China to fight the Coronavirus, had been found to be defective and unsafe for use. [4] [5]

The cities of Espoo and Shanghai are sister cities since 1998. Ever since, various collaboration programs have been carried out in areas of science and technology, urban development, culture, education, health care and environmental protection. The last high-level meeting was in June 2012 when the Mayor of Espoo, Mr Jukka Mäkelä, met the Mayor of Shanghai, Mr Han Zheng, during a visit to China.[ citation needed ]

In recent years, Finland-China relations have been strengthened by various Espoo-Shanghai actions.

China - Finland ICT Alliance was initiated in April 2009 with workshops in Beijing and Shanghai, opened by Mr. Matti Vanhanen, Former Prime Minister of Finland and Mr. Wan Gang, Minister of Science and Technology of China. The initiative is run by TIVIT Oy - Strategic Centre for Science, Technology and Innovation in ICT.[ citation needed ]

China and Russia are suspected of large-scale spying of the IT networks at the Finnish Ministry for Foreign Affairs. The spying focused on data traffic between Finland and the European Union, and is believed to have continued for four years. The spying was uncovered in spring 2013, and as of October 2013 [update] the Finnish Security Intelligence Service (Supo) was investigating the breach. [6]

Though the Ministry of Foreign Affairs (MOFA) is the government agency responsible for the conduct of foreign relations of Nepal, historically, it is the Office of Prime Minister (PMO) that has exercised the authority to formulate and conduct policies related to Nepal's foreign affairs. As a landlocked country wedged between two larger and far stronger powers, Nepal has tried to maintain good relations with both of its neighbors, People's Republic of China and Republic of India. However, its relationship with India, remains utmost priority due to open border and similarity in culture, tradition, geography, living practices. The relationship between the two countries was significantly hampered during the 2015 Nepal blockade. Where the Nepal Government accused India of the blockade, India strictly denied the allegation and said the blockade were imposed by Madheshi protesters. For the most part though, Nepal has traditionally maintained a non-aligned policy and enjoys friendly relations with its neighboring countries and almost all the major countries of the world. 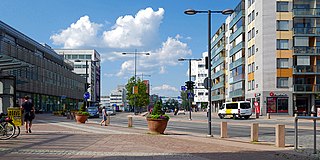 Espoo is a city and municipality in the region of Uusimaa in the Republic of Finland. It is located on the northern shore of the Gulf of Finland, bordering the cities of Helsinki and Vantaa, while surrounding the enclaved town of Kauniainen. The city covers 528.03 square kilometres (203.9 sq mi) with a population of 292,913 residents in December 2020, making it the 2nd-most populous city in Finland. Espoo forms a major part of a substantially larger metropolitan area known as Greater Helsinki, home to over 1.5 million people in 2020. 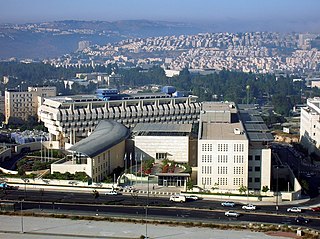 Yangpu District is one of the 16 districts of Shanghai. It is located in northeastern part of downtown Shanghai, bordering the Huangpu River on the east and south, Hongkou District on the west, and Baoshan District on the north. The southern part of Yangpu District is 4 km (2.5 mi) away from the Bund, a major tourist attraction. It is predominantly composed of residential communities, with a total area of 60.61 km2 (23.40 sq mi) and a population of 1.313 million as of 2010. The district administers 12 subdistricts.

Tongji University is a comprehensive university located in Shanghai. Established in 1907 by the German government together with German physicians in Shanghai, Tongji is one of the oldest and most selective, most prestigious universities in China under the Project 985. It is a Chinese Ministry of Education Class A Double First Class University. 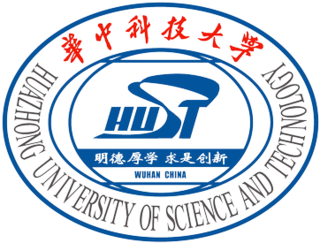 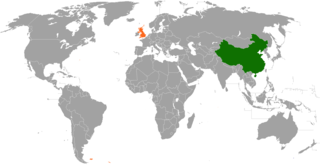 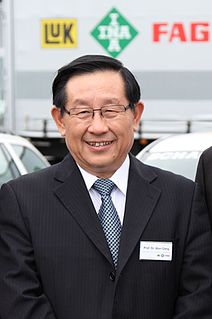 Wan Gang is a Chinese expert on automobiles, former president of Tongji University (2002–2007) and former Minister of Science and Technology. He is the Chairman of the China Zhi Gong Party, a legally sanctioned minor political party in China, and, since 2013, also Vice Chairman of the Chinese People's Political Consultative Conference.

Finland–Russia relations have been conducted over many centuries, from wars between Sweden and Russia in the 1700s, to the planned and realized creation and annexation of the Grand Duchy of Finland within the Russian Empire during Napoleonic times in 1800s, to the dissolution of the personal union between Russia and Finland after the abdication of Russia's last czar in 1917, and subsequent birth of modern Finland, with support of the bolshevik (Soviet) Russian government. Finland had its own civil war with minor involvement by Soviet Russia, was later invaded by the USSR, and had its internal politics influenced by it. Relations since then have been both warm and cool, fluctuating with time. Russia has an embassy in Helsinki, a consulate-general in Turku and consulates in Lappeenranta and Mariehamn. Finland has an embassy in Moscow, a consulate-general in Saint Petersburg and two branches of the consulate.

Aalto University is a public research university located in Espoo, Finland. It was established in 2010 as a merger of three major Finnish universities: the Helsinki University of Technology, the Helsinki School of Economics and the University of Art and Design Helsinki. The close collaboration between the scientific, business and arts communities is intended to foster multi-disciplinary education and research.

Chile–Finland relations are foreign relations between Chile and Finland. Chile recognised Finland's independence on June 17, 1919. Diplomatic relations between them were established in 1931 and have been continuously maintained, despite pressures at times to discontinue them. The two countries maintain resident ambassadors in both capitals.

Diplomatic relations between the People's Republic of China and the Republic of Trinidad and Tobago were established on 20 June 1974. The Chinese government established an embassy in Port of Spain in April 1975, with Trinidad and Tobago establishing their own embassy in Beijing on 26 February 2014. Prime Minister Eric Williams was the first Trinidadian head of government to visit China in 1974. In 2002, the trade balance between the two countries was US$47.15 million, with China exporting all but $4.81 million of that. The current Chinese ambassador to Trinidad and Tobago is Mr. Yang Youming. 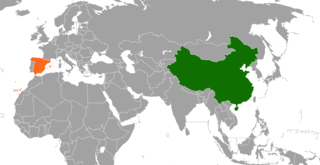 China–Spain relations have existed since the 16th century. Relations between Spain and the People's Republic of China were established in 1973.

China–Tajikistan relations are the bilateral relations between the People's Republic of China and the Republic of Tajikistan, established on January 4, 1992, shortly after the dissolution of the Soviet Union.

Armenian-Chinese relations are the foreign relations between Armenia and China. The first references to Armenian-Chinese contact are found in the works of 5th-century historian Moses of Chorene and 6th-century geographer and mathematician Anania Shirakatsi. The People's Republic of China officially recognized the Republic of Armenia on December 27, 1991. Diplomatic relations between Armenia and the People's Republic of China were established on April 6, 1992. The Embassy of China to Armenia was established in July 1992, while the Embassy of Armenia to China started its activities on August 10, 1996. The Armenian Ambassador to China resides in the Beijing embassy.

India–Tunisia relations refers to the international relations that exist between India and Tunisia.