This list includes all Chinese female artistic gymnasts who have won at least four medals at the Olympic Games and the World Artistic Gymnastics Championships combined. 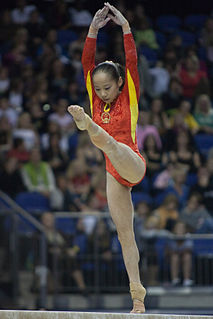 Deng Linlin, is a retired Chinese gymnast. She was a member of the Chinese team that won the team gold medal at the 2008 Olympic Games in Beijing, People's Republic of China, and is a three-time World Cup gold medalist. She is the 2009 World and 2012 Olympic champion on balance beam. 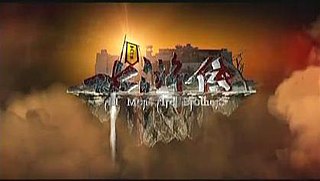 Yao Jinnan is a retired artistic gymnast who represented China at the 2012 Summer Olympics. She is the 2014 world champion on the uneven bars, and the 2011 world all-around bronze medalist and balance beam silver medalist.

Shanghai Bund is a 2007 Chinese television series directed by Gao Xixi. It is a remake of the 1980 Hong Kong television series The Bund produced by TVB. The series stars Huang Xiaoming, Sun Li, Li Xuejian, Huang Haibo, Chen Shu and Sha Yi in the lead roles.

Chen Siyi is an elite Chinese gymnast. She trains at the National Training Center in Beijing. She's coached by Xiong Jingbin and Zhang Xia, who also coached Deng Linlin and Jiang Yuyuan. Her best events are uneven bars and balance beam.

Wang Yan is a senior elite Chinese gymnast. She won a bronze medal in the team event at the 2016 Summer Olympics.

Luo Huan is an elite Chinese gymnast. She is a two-time Chinese national all-around champion and the 2017 Asian and 2018 Asian Games all-around silver medalist. On her specialty events, she is the 2017 Asian and 2017 Chinese national uneven bars champion and the 2018 Chinese balance beam champion. She was a member of the Chinese women's gymnastics team that won the team bronze medal at the 2018 Artistic Gymnastics World Championships. Overall, she has won eleven medals at the Chinese Artistic Gymnastics Championships.

Liu Tingting is a Chinese artistic gymnast and the current team captain of the Chinese women's national artistic gymnastics team. She is best known for her innovative, quick connections and high degree of difficulty on balance beam and uneven bars. She is the 2018 World champion, the 2019 World silver medalist, and the 2017 Asian champion on balance beam, and the 2018 Asian Games and 2019 Chinese national champion on the uneven bars. She has also often competed in the all-around event in her senior career, where is the 2017 Asian champion and a two-time Chinese national champion.

The China Badminton Super League (CBSL) is the prime National team competition for badminton players in China. The China Badminton Super League was re-launched in 2009 after a failing attempt seven years earlier. Liu Fengyan, director of the Table Tennis and Badminton Administration Center under China's State General Administration of Sport, announced the re-launch during the 50th anniversary meeting of the Chinese Badminton Association.

Chen Yile is an elite Chinese female artistic gymnast. She is the 2018 Asian all-around and balance beam champion, and the 2017 Asian junior all-around and uneven bars champion. She was a member of the team that won the bronze medal at the 2018 World Artistic Gymnastics Championships. Chen stars in the Olympic Channel documentary series "All Around," along with American gymnast Morgan Hurd and Russian gymnast Angelina Melnikova. The series shows her training and daily life as a 2020 Olympic hopeful.

Tang Xijing is a Chinese artistic gymnast. She is the 2019 World all-around silver medalist, matching Jiang Yuyuan at the 2010 World Championships for the highest all-around finish for a Chinese woman in World or Olympic history. She is also the 2020 Olympic silver medalist on balance beam. On the junior level, she is the 2018 Youth Olympic balance beam champion and uneven bars bronze medalist.

Qi Qi is a Chinese artistic gymnast. Best known as a vault and floor specialist, she is a two-time Chinese national vault champion, the 2020 Chinese national floor champion, and a ten-time medalist at the Chinese Artistic Gymnastics Championships. On the junior level, she is the 2018 Asian all-around, vault, and floor exercise champion.