"Chinese Taipei" is a designated term being used in various international organizations and tournaments for the representation of the Republic of China (ROC), a sovereign state commonly known as Taiwan. 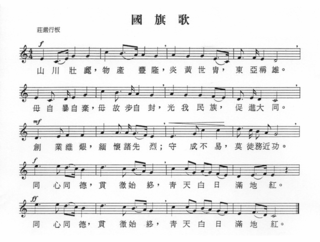 Jack Hui is an alumnus from Queen's College in Hong Kong. He is considered a prominent student because of the outstanding performance in International Mathematical Olympiad (IMO) and various national and regional mathematics competitions. Though accused of sexually assaulting an airline hostess, he was later found not guilty, and later admitted to the Faculty of Mathematics of Peking University.

Taiwan currently competes as "Chinese Taipei" at the Olympic Games. The Republic of China first participated at the Summer Olympic Games in 1932. After the Chinese Civil War the ROC retreated to the island of Taiwan and only Taiwan-based athletes have competed in its team since then. The ROC boycotted the Olympics starting from the 1976 Summer Games until it returned to the 1984 Winter Games, and started participating as Chinese Taipei.

Hong Kong participated in the 2014 Asian Games in Incheon, South Korea from 19 September to 4 October 2014.

The 2019 East Asian Youth Games were to be the first international multi-sport event for countries in East Asia.

Lin Yung-hsi is a Taiwanese gymnast. He competed in seven events at the 2000 Summer Olympics.

Chuan Hung-ping is a Taiwanese diver. He competed in the men's 10 metre platform event at the 1996 Summer Olympics.

Tsai Yi-san is a Taiwanese diver. She competed in the women's 3 metre springboard event at the 2000 Summer Olympics.

Chen Ting is a Taiwanese diver. She competed in the women's 3 metre springboard event at the 2000 Summer Olympics.

Hsieh Pei-hua is a Taiwanese diver. She competed in the women's 10 metre platform event at the 2000 Summer Olympics.

Shiao Yu-jan is a Taiwanese artistic gymnast. In 2018, he represented Chinese Taipei at the 2018 Asian Games held in Jakarta, Indonesia without winning a medal.

Chen Chih-yu is a Taiwanese artistic gymnast. In 2018, he won the bronze medal in the men's rings event at the 2018 Asian Games held in Jakarta, Indonesia.

Hsu Ping-chien is a Taiwanese artistic gymnast. He competed at the Asian Games in 2010 and 2014. He also competed at the World Artistic Gymnastics Championships in 2017 and 2019.