Chion-in (知恩院, Monastery of Gratitude) in Higashiyama-ku, Kyoto, Japan is the headquarters of the Jōdo-shū (Pure Land Sect) founded by Hōnen (1133–1212), who proclaimed that sentient beings are reborn in Amida Buddha's Western Paradise (Pure Land) by reciting the nembutsu , Amida Buddha's name.

The original temple was built in 1234 by Hōnen's disciple, Genchi (1183–1238) in memory of his master and was named Chion-in. While the temple was affiliated more closely in the early years with the Seizan branch of Jodo Shu, its 8th head priest, Nyoichi (1262–1321) was deeply influenced by the priest Ryōkū, a disciple of Ryōchū who was the 3rd head of the Chinzei branch of Jōdo-shū Buddhism, and disciple of Benchō. Later Nyoichi's successor Shunjō (1255–1355) advanced this further by citing a biography where Genchi's disciple Renjaku-bo and Ryōchū agree that there existed no doctrinal differences between them: [1] [2]

Then Renjaku-bo said, «There is complete agreement between what Genchi and Bencho say in their basic teaching. So my disciples should from now on look at the Chinzei teaching as their own. There is no need to set up another school.»

By 1450, Chion-in had become fully under control of the Chinzei branch, but had little direct control, due to the outbreak of the Ōnin War. [1] Numerous buildings in the complex were burnt down in 1633, but were entirely rebuilt by the third Tokugawa shōgun Iemitsu (1604–1651) with the palatial structures that stand today.

The colossal main gate, the Sanmon, was built in 1619 and is the largest surviving structure of its kind in Japan. It features an Irimoya-zukuri or a Hip and Gabled roof. [3] The purpose of the hip and gable roof is to protect the center point of the temple.

Chion-in has a large and a small guest house in the irimoya roof style called Ohojo and Kohojo that are designated Important Cultural Heritages. Both guest houses were built in 1641.

Chion-in is home to Japan's largest temple bell, which was commissioned in 1633 and weighs 74 tons. It used to require a 25-man team to sound it. [4] But now the temple website says 17 are needed.

There are a few interesting features to note about Chion-in: first, all roof beams are carved with the family crest of the Tokugawa family: three hollyhock leaves. Another feature is the umbrella found stashed in the rafters outside the main temple. One of the architects who helped rebuild the temple placed the umbrella in the rafters to help bring rain (and thereby ward off fire).

An interesting feature inside the temple is the very squeaky boards, an example of a nightingale floor. The wooden boards were built with metal ends that would rub against the metal joints they were attached to, created a piercing noise as people step on them. This was intentionally done so that when the Tokugawa family stayed at the temple, they could detect unwanted intruders at night.

The interior of Chion-in is decorated with black, gold and cinnabar colors throughout. A baldacchino of fine metal work, and red, silk ropes and tassels adorn the area. Lotus plants in pots encased in beaten gold. [5]

The introduction of wood being a fine art and working with contemporary art is drastically changed the way that religious buildings were built and decorated.

This 550m long hallway connects Mieidō and Shūedō. The Nightingale hallway was equipped with flooring that make the sound of the Nightingale when someone walks on them. It acts as a type of security system as the lighter someone tries to walk the more sound it makes. [6] They say that the sound of the nightingale bird is meant to be a reminder to listen to Buddha's teachings. [6]

The Forgotten Umbrella (A Symbol of Gratitude)

This umbrella holds many different meanings, it is in Mieidō between the eaves on the southeast section. It is said to be a symbol of gratitude delivered by a white fox, promising to protect Chion-in. Another said it was simply forgotten by master carpenter, Hidari Jingorō. Lasty, it is said to protect Chion-in from fires because it has a connected relationship to water. [6]

The Sparrows that Flew Away (A Symbol of Polishing One's Mind)

The fusuma-e, or a painting on sliding doors, done by Kanō Nobumasa a painting featuring white Chrysanthemum flowers. According to legend sparrows were painted on but the birds look so real that they came to life and flew away. [6]

Located in Ōhōjō, the large guest house. This painting of a cat represents compassion of the Buddha and the heart of a parent. This cat seems to be looking at you at anywhere you may be look at it. [6]

Large Rice Paddle (A Symbol of the Buddha’s Salvation)

This was a larger than average paddle, meant to serve a lot of people at once. This rice paddle, according to legend, was meant to save all of mankind. "Scoop" and "Save/rescue" are both pronounced Sukuu. This play on words was meant to symbolize Amida's compassion. [6]

The Cucumber Rock (A Symbol of Encouragement)

This large rock said to predate Chion-in is in front of the Kuromon. Gozu Tennō, a deity, said that in one night gourds started to grow from this rock. [6]

Hōnen was the religious reformer and founder of the first independent branch of Japanese Pure Land Buddhism called Jōdo-shū. He is also considered the Seventh Jōdo Shinshū Patriarch.

Tendai is a Mahayana Buddhist school established in Japan in the year 806 by the monk named Saichō, posthumously known as Dengyō Daishi. The Tendai school rose to prominence during the Heian period (794-1185), gradually eclipsing the powerful Yogācāra school (Hossō-shū) and competing with the upcoming Shingon Buddhism to become the most influential at the Imperial court.

Nianfo is a term commonly seen in Pure Land Buddhism. In the context of Pure Land practice, it generally refers to the repetition of the name of Amitābha. It is a translation of Sanskrit buddhānusmṛti.

Jōdo-shū, also known as Jōdo Buddhism, is a branch of Pure Land Buddhism derived from the teachings of the Japanese ex-Tendai monk Hōnen. It was established in 1175 and is the most widely practiced branch of Buddhism in Japan, along with Jōdo Shinshū.

Ikkō-shū (一向宗) or "single-minded school" is usually viewed as a small, militant offshoot from Jōdo Shinshū Buddhism though the name has a complex history.

Shandao was an influential writer for the Pure Land Buddhism, prominent in China, Korea, Vietnam and Japan. His writings had a strong influence on later Pure Land masters including Hōnen and Shinran in Japan.

Kumagai no Jirō Naozane was a famous soldier who served the Genji (Minamoto) Clan during the Heian period of Japanese history. Kumagai is particularly known for his exploits during the Genpei War, specifically for killing the young warrior Taira no Atsumori at the battle of Ichi-no-tani in 1184. Atsumori's death and the circumstances surrounding it went on to be fictionalized and retold in numerous forms, including the Heike Monogatari epic, a number of Noh plays, and in the jōruri and kabuki theatres as well. 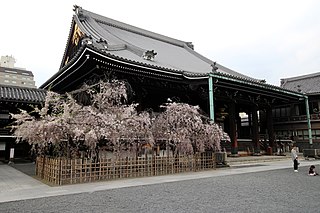 Bukkō-ji, also known as the "Temple of the Buddha's Light", was originally named Kosho-ji, a Jōdo Shinshū temple in the Yamashina ward of Kyoto, which later moved to the heart of Kyoto. The temple was founded and officially opened by a disciple named Ryōgen in 1324, but by the 15th century, Bukkō-ji was the largest and most successful temple, and its network of branch temples extending throughout the provinces of western Japan. As a rival to the Hongan-ji, it received much criticism for its evangelical practices from Kakunyo the head of the Hongan-ji. Around 1481, however, Bukkō-ji became a subordinate temple to the Hongan-ji. Many of the Bukkō-ji's congregation thus became members of the Hongan-ji, thus greatly reducing the stature.

Senju-ji (専修寺), also known as Takadayama (高田山), refers to a pair of temples which are the chief Buddhist temples of the Takada branch of Jōdo Shinshū, a Japanese Buddhist sect. The current head temple, Honan Senju-ji, founded in the 15th century, is located in Mie Prefecture. The original head temple, Hon-ji Senju-ji, founded in 1225, is located in Tochigi Prefecture. Both temples are governed by the same abbot.

For other temples by similar names, see Zenrin-ji.

Kenjōdo Shinjitsu Kyōgyōshō Monrui (顕浄土真実教行証文類), often abbreviated to Kyōgyōshinshō (教行信証), is the magnum opus of Shinran Shonin, the founder of the Japanese Buddhist sect, Jodo Shinshu. The title is often translated as The True Teaching, Practice, and Realization of the Pure Land Way in English. The work was written after Shinran's exile, and is believed to have been composed in the year 1224. It represents a synthesis of various Buddhist sutras in Mahayana literature, including the Larger Sutra of Immeasurable Life, the Nirvana Sutra, the Avatamsaka Sutra and the Mahaprajñaparamita Sutra. In this way, Shinran expounds Jodo Shinshu thought. The work is divided into six chapters, not including the Preface:

Shōkū, sometimes called Seizan (西山), was a disciple of Hōnen, founder of the Jōdo-shū Buddhist sect. Shōkū later succeeded Jōhen, another disciple of Hōnen, as the head of a former Shingon Buddhist temple, Eikandō, established a separate branch of Jōdo-shū called the Seizan branch, and completed the transition of Eikandō from a Shingon temple into a Jōdo shū one.

Seizan (西山) is the name of the branch of Jōdo-shū Buddhism that was founded by Hōnen's disciple, Shōkū. Shōkū often went by the name Seizan as well, however the name derives from the western mountains of Kyoto where Shōkū often dwelt. The main temple of this branch of Buddhism is at the temple of Eikandō in the city of Kyoto. The temple formerly served as a Shingon Buddhist temple, but when Jōhen headed the temple, he took an interest in Jōdo Buddhism, designated Hōnen as the 11th chief priest. Later, Hōnen's disciple became the head priest of Eikan-dō, and established the Seizan branch, fully converting the temple into a Jōdo one.

Benchō, was a Japanese Buddhist monk and second patriarch of the main Chinzei branch of the Jōdo-shū sect of Japanese Buddhism, after Hōnen. In Jodo Shu Buddhism, he is often called by adherents as Shōkō Shōnin (聖光上人) or Shōkōbō (聖光房). According to biographies, he first ordained as a priest of the Tendai sect at the age of fourteen, and entered Enryaku-ji temple in 1183. He first met Hōnen in 1197. Later, after Hōnen and many of his followers were exiled in 1207, Shōkō was exiled on the island of Kyūshū and taught the practice of the nembutsu there.

The Senchaku Hongan Nembutsushū (選択本願念仏集), abbreviated to Senchakushū, is the magnum opus of Hōnen, founder of the Jōdo-shū school of Japanese Pure Land Buddhism. The title means "Passages on the Selection of the Nembutsu in the Original Vow" and draws upon past Pure Land Buddhist sources, sutras and especially from the writings of Chinese Pure Land Buddhist Shan-tao to bolster Hōnen's doctrine of relying upon the sole recitation of Amitabha Buddha's name for rebirth in the Pure Land. Hōnen also asserts for the first time that he is establishing a new school of Buddhism.

The Chinzei-ha (鎮西派) branch, also called the Chinzeigi, of Jōdo-shū Buddhism is the main branch that exists today, and was first established by Benchō a disciple of Hōnen, but formalized into a separate branch by Benchō's disciple Ryōchū.

The Jodo Shinshu Buddhist Temples of Canada are a group of temples and fellowships that are affiliated with the Nishi Hongan-ji of Kyoto, Japan, the mother temple of the Jodo Shinshu sect of Buddhism.