Chisholm Trail Technology Center (CTTC) is a public career and technology education center located in Omega, Oklahoma, and is part of the Oklahoma Department of Career and Technology Education system. The center is located on Highway 33, 13 miles east of Watonga and 16 miles west of Kingfisher.

In August 1987, voters in the Kingfisher, Watonga, Lomega and Hitchcock school districts elected five board members to the newly formed Area Vocational School District No. 26. Their first official act was to call for a 5-mill election on November 3, 1987, to provide for operating expenses for the district. The 5-mill operational levy was approved by solid margins.

Kenneth Glazier began duties as Superintendent of the district on March 1, 1988.

In April 1988, a contest was held to name the vo-tech district. The winning name, Chisholm Trail Area Vocational-Technical Center, was submitted by Roger McAdams of Kingfisher.

Fifty acres of land were purchased for the construction of the center. HT&B Architect firm of Oklahoma City was hired to design the facility. Short-term adult classes began in Kingfisher and Watonga in September 1988.

Voters in the Watonga, Hitchcock, Lomega, and Kingfisher school districts went to the polls on September 27, 1988, and passed a $2.6 million bond issue to build and equip the center. Groundbreaking ceremonies were held on Friday, June 2, 1989. The building was completed and dedication ceremonies were held on Sunday, August 12, 1990. Classes in the new facility began that month for adult and high school students.

In 2001 the center changed its legal name to Chisholm Trail Technology Center.

Max Thomas was hired in July 2007 as the current Superintendent.

On April 1, 2014 the Dover Public Schools voted to annex to Chisholm Trail Technology Center to become the fourth school in the CTTC district.

Blaine County is a county located in the U.S. state of Oklahoma. As of the 2010 census, the population was 9,785. Its county seat is Watonga. Blaine County is the birthplace of voice actor Clarence Nash, the voice of Disney's Donald Duck.

Watonga is a city in Blaine County, Oklahoma. It is seventy miles northwest of Oklahoma City. The population was 5,111 at the 2010 census. It is the county seat of Blaine County. 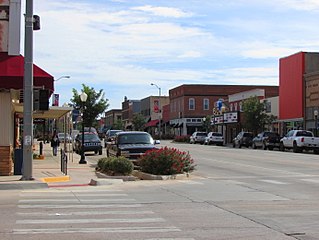 Kingfisher is a city in and the county seat of Kingfisher County, Oklahoma, United States. The population was 4,633 at the 2010 census, up from the figure of 4,380 in 2000. It is the former home and namesake of Kingfisher College. According to the Encyclopedia of Oklahoma History and Culture, Kingfisher is now primarily a bedroom community for people employed in Enid and Oklahoma City.

Francis Tuttle Technology Center is a public career and technology education center affiliated with the state of Oklahoma Department of Career and Technology Education. It was established in 1979 after the school boards of four school districts - Deer Creek, Edmond, Putnam City and Western Heights - passed a resolution to form Vocational Technical District 21. Since that time, the districts in Cashion and Crescent have also been added to District 21.

St. Mary's County Public Schools is a school district that serves St. Mary's County, Maryland, USA, at the confluence of the Potomac River, Patuxent River, and Chesapeake Bay. The area is a mixture of rural and suburban communities. Many of the families are employed by NAS Patuxent River, government contractors, St. Mary's College of Maryland, county government, and others involved in the traditional agriculture and water-related businesses. It has an approximate enrollment of almost 17,000 students. SMCPS operates 18 elementary schools, 5 middle schools, 4 high schools, an Alternative Learning Center, and a Vocational Training Center, serving students in Grades Pre-K through 12th grade. The school system is overseen by the Maryland State Department of Education.

Sandy High School is a public high school in the northwest United States, located in Sandy, Oregon, east of Portland. Originally located in a two-story schoolhouse in 1917, the high school was given its own standalone brick structure in 1923 to accommodate a growing student body as the Portland metropolitan area and surrounding cities expanded in population; that building is used now as Cedar Ridge Middle School.

Meridian Technology Center is a public two-year technical college in Stillwater, Oklahoma. It is part of the Oklahoma Department of Career and Technology Education. 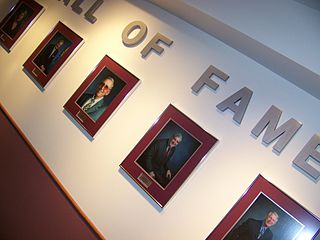 The Oklahoma CareerTech Hall of Fame is an award given to individuals who, through their outstanding professional and personal achievements, have brought honor and distinction to career and technology education in Oklahoma.

Greater New Bedford Regional Vocational-Technical High School is a vocational high school located in New Bedford, Massachusetts, United States for students in grades 9–12. The school draws its student body from the towns and cities of New Bedford, Dartmouth, and Fairhaven. It is considered its own school district, thus having an on-site superintendent as well as an academics principal and a vocational-technical principal. Students alternate between six day long career technical and academic cycles.