The Chosen Government Railway (Japanese : 朝鮮總督府鐵道, Chōsen Sōtokufu Tetsudō; Korean : 조선총독부 철도, Joseon Chongdokbu Cheoldo) was a state-owned railway company in Korea under Japanese rule. It was a department of the Railway Bureau (Japanese : 鐵道局, Tetsudōkyoku; Korean : 철도국, Cheoldoguk) of the Government-General of Korea, whose functions were the management and operation of railways in Korea, as well as the supervision of privately owned railway companies.

The Chosen Government Railway's public identity changed a number of times over the 39 years that it existed. In the first four years of its existence, its name changed three times to reflect the rapid changes in Korea's political environment between 1905 and 1910. Later, for eight years Korea's railways were managed by the South Manchuria Railway - which was almost a state-level actor in the region on its own - before finally regaining its independence for the last twenty years of its life.

The organisation of the Railway Bureau as of 1 September 1941:

The Railway Bureau also operated a system of sports clubs. Today's Daejeon Korail FC is the direct descendant of Sentetsu's football club, which won the All-Korea football championship in 1939; [2] Sentetsu's ice hockey club was the first to ever play a game of that sport in Korea, playing a game against the team of the Tokyo Imperial University in 1928, and later played the first game between two Korean clubs, against a team from the Gyeongseong Imperial University.

Sentetsu, or more accurately its predecessor, the National Railway, was created through the merger of the Temporary Military Railway and the Gyeongbu Railway, which had previously absorbed the Gyeongin Railway, on 1 September 1906. At the time of the merger, the Korean locomotive fleet was as follows: [3]

When the National Railway became Sentetsu in 1910, the locomotive fleet had increased by only 21 engines; by the time Mantetsu took over the management of Korea's railways in 1917, the Sentetsu motive power fleet had grown from 115 in 1910 to 175. Mantetsu management lasted just under a decade, and by the time Sentetsu regained its independence in 1925 the locomotive park stood at 247 engines. The 1930s, however, saw enormous growth in Sentetsu's fleet. From 302 locomotives in 1930, by the end of the decade the number had more than doubled to 740 engines in 1940, and reached 1,000 in 1944. When Sentetsu was abolished after the end of the Pacific War there were 1,302 locomotives on the roster. [3]

Sentetsu's first classification system was a simple, number-based system, in which, loosely, the hundreds digit of the running number indicated the locomotive's wheel arrangement - numbers in the 100s were 2-6-0 or 2-8-0, those in the 200s and 300s were 4-6-0, the 400s were 4-4-0, the 500s were 4-6-4, and so on. This slightly modified in 1918, the year after Mantetsu took over management of Korea's railways, with some of the numbers being redefined, and after Mantetsu introduced a new classification system for its own locomotives in 1920, the system for Korean locomotives was once again adjusted, retaining the number series as they were in 1918, but adding new class designations - likewise reflecting wheel arrangement - akin to those used for Mantetsu's own locomotives, based on the common American name for the given wheel arrangement. Thus, from the 1920s until 1938, Sentetsu's locomotive had both a katakana-based class designation as well as a running number; however, unlike Mantetsu's engines, those of Sentetsu didn't have the class designation marked on the locomotive itself.

In 1938, Mantetsu introduced a unified classification and numbering system for its own locomotives, as well as for those of its de jure subsidiary, the North China Transportation Company, and its de facto subsidiary, the Manchukuo National Railway. At the same time Sentetsu - though it had regained its independence in 1925 - introduced its own variant of the new Mantetsu system, which included the locomotives owned by private railways in Korea. [4]

The new system consisted of a class designation and a running number counting sequentially from 1; the class designation had three katakana characters. [5] The first two, indicating wheel arrangement, remained as they were in the previous system, with the addition of one: マテ (Mate), from "Mountain", for 4-8-2 locomotives introduced in 1939. The third katakana in the class name was the class number, derived from the first syllable of the corresponding Japanese numbers from one to ten:

Thus, the third class of locomotives with a 4-6-2 wheel arrangement would be called パシサ - Pashisa.

Narrow-gauge steam locomotives did not use the designation forms based on wheel arrangement; instead, they all used ナキ ("Naki", from English "Narrow Gauge") plus a class number. Petrol-powered narrow gauge railcars were classified ナケハ.

Classification of electric locomotives was slightly different from that used for steam locomotives. Although this also used the two character + class number arrangement, the first character was デ ("de", from 電気, denki, "electric"), while the second character indicated the number of powered axles (using the same number abbreviations as used for the class number). In practice, Sentetsu had only two types of electric locomotive, both with six powered axles - デロイ (DeRoI) and デロニ (DeRoNi). [5]

This classification system later formed the basis of the systems used by both the Korean National Railroad in South Korea [3] and the Korean State Railway in North Korea. [5]

The following is a list of the rail lines of the Chosen Government Railway in 1945. The name in brackets is the Japanese form of the name, which was the officially used form.

A number of private railways existed during the period of the Japanese occupation of Korea; these were overseen by the Railway Bureau. Most were freight (served industrial plants, ports, natural resource transport sectors, as well as military transport) and a few for passenger service in Japanese-occupied Korea.

After the end of the Second World War, these were all nationalised, both in North and South Korea.

This is a (nearly) exhaustive list of private railways in Korea. 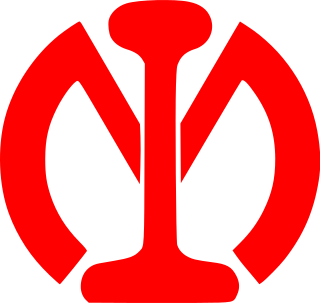 The Hamgyeong Line was a railway line of the Chosen Government Railway (Sentetsu) in Japanese-occupied Korea, running from Wonsan to Sangsambong. Construction began in 1914, and was completed in 1928. The line is now entirely within North Korea; the Korean State Railway has divided it between the Kangwŏn Line, the P'yŏngra Line, the Kangdŏk Line (Namgangdŏk−Suseong), and the Hambuk Line.

The Tomon Railway Company, was a privately owned railway company in Japanese-occupied Korea.

The Chosen Railway Company, was a privately owned railway company in Japanese-occupied Korea.

The Pyeongbuk Railway was a privately owned railway company in Japanese-occupied Korea.

The Gaecheon Light Railway was a privately owned railway company in Japanese-occupied Korea.

The Chosen Gyeongnam Railway, was a privately owned railway company in Japanese-occupied Korea.

The Keijin Railway LP, was a privately owned railway company in the Korean Empire.

The Temporary Military Railway Office, was a pseudo-corporate entity established by the Imperial Japanese Army to build and operate the Gyeongui Line railway from Gyeongseong to Sinuiju.

The Gyeongui Line was a railway line of the Chosen Government Railway running from Gyeongseong to Sinuiju in Korea. After the partition of Korea in 1945, the line was divided between North and South Korea.

The North Chosen Line – specifically, the North Chosen West Line and the North Chosen East Line – was a railway line of the South Manchuria Railway in Japanese-occupied Korea from 1933 to 1945. Following Japan's defeat in the Pacific War and the subsequent partition of Korea, the line, being located entirely in the North, was taken over by the Korean State Railway as part of the Hambuk Line.