Chris-Pin Martin (born Ysabel Ponciana Chris-Pin Martin Paiz, November 19, 1893 – June 27, 1953) was an American character actor whose specialty lay in portraying comical Mexicans, particularly sidekicks in The Cisco Kid film series. [1] He acted in over 100 films between 1925 and 1953, including over 50 westerns.

Martin was born in Tucson, Arizona. His roles were as a bumbling or slow comedic character who spoke in broken English. His most remembered western film role was in nine of the Cisco Kid films playing the Kid's sidekicks Gordito and in the later films Pancho. He also appeared in the John Ford classic Stagecoach (1939) with John Wayne. He was credited in his films by other names, including Chrispin Martin, Chris King Martin, Chris Martin, Cris-Pin Martin, and Ethier Crispin Martini.

Martin was adept in both drama and comedy, in films like the melodramatic The Ox-Bow Incident (1943) as "Poncho" the Mexican who reluctantly becomes a part of a lynch mob and a contrite confessor. In A Millionaire for Christy (1951) Martin plays a brief but memorable role as "Manolo", a Mexican who knows no English.

Less than five months before his 60th birthday, Martin died of a heart attack while addressing a Moose lodge meeting in the Los Angeles suburb of Montebello. [2] He is buried at the Odd Fellows Cemetery on Whittier Blvd, in East Los Angeles. [3] 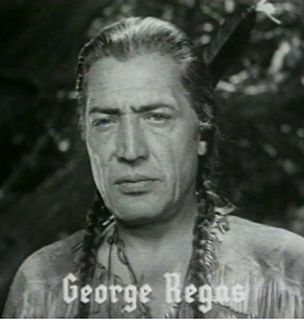 Petros 'Pedro' Regas, a veteran stage actor, Regas was spotted on the Broadway stage by Mary Pickford who persuaded him to go to Hollywood and be in pictures, which he did in 1920 and continued to play in films for 50 years.

Donald Reed was a film actor, and later, Beverly Hills video consultant. He appeared in 47 films between 1925 and 1940. He married the beauty pageant winner Janet Eastman and the two had one daughter together, Joy. He was born in Mexico City, Mexico and died in Westwood, Los Angeles, California.