Sir Christopher Heydon (14 August 1561 – 1 January 1623) was an English soldier, Member of Parliament, and writer on astrology.

Born in Surrey, Heydon was the eldest son of Sir William Heydon (1540–1594) of Baconsthorpe, Norfolk, and his wife Anne, daughter of Sir William Woodhouse of Hickling, Norfolk. The family was powerful in Norfolk affairs, owning many manors and living at Baconsthorpe Castle, a large country house in North Norfolk. [1]

Heydon was educated at Gresham's School, Holt [1] [2] and Peterhouse, Cambridge, [3] where he knew the young Robert Devereux, 2nd Earl of Essex, and after graduating BA in 1579 travelled widely on the continent. [1]

Dispute with his father

Deeply in debt, Heydon's father Sir William had mortgaged Baconsthorpe and was in need of the Queen's protection from his creditors. In 1590 he tried to sell much of his land, but his son challenged him, as the estates were entailed on him. Sir William then threatened to demolish Baconsthorpe Castle, but his son got an Order from the Privy Council, which condemned the plan as unnatural. The dispute dragged on for years, and when Sir William died in 1594, he left his estate to his widow, but Heydon then went to law against her. Lady Heydon appealed to Queen Elizabeth, and the dispute was settled on her orders by the Lord Keeper. Heydon was left with inherited debts of £11,000, as well as his own of over £3,000 – huge sums in the 16th century. [1]

In 1586, while he was still a young man, Heydon stood for the Norfolk county constituency of the Parliament of England. Although defeated, the Privy Council of England ordered a fresh poll, which Heydon won. The House of Commons challenged the Council's constitutional right to interfere in elections, and the second election was quashed. Heydon stood again for parliament in 1588, again successfully. [1]

He joined the Earl of Essex and took part in his capture of Cádiz in 1596, where he was knighted. [1]

In October 1600 Heydon challenged Sir John Townshend to a duel, but it was forbidden by the Privy Council. [1]

After his father's death, Heydon mortgaged Baconsthorpe, and with his brother John he took part in the Essex revolt of 1601, leading rebel troops through Ludgate, which marked the end of his public life. Heydon went into hiding and wrote to Sir Robert Cecil, offering to pay a fine. Cecil worked to get him a pardon. Heydon was held in the Fleet Prison, but was pardoned for £2,000. His finances were very low, and in 1614 he was forced to mortgage the rest of his estates. [1]

Heydon was famous as a champion of astrology. His best-known work was A Defence of Judiciall Astrologie (1603), the most substantial English defence of astrology of its day, rebutting John Chamber's A Treatise Against Judiciall Astrologie (1601), which had called for parliament to outlaw astrology. Heydon argued that it was a valid science, compatible with Christianity. He drew upon Tycho Brahe and others. [1]

In writing A Defence of Judiciall Astrologie, Heydon had the help of the Reverend William Bredon, who was both a clergyman and an astrologer and was at the time Heydon's chaplain. William Lilly says whimsically of him: "William Bredon... had a hand in composing Sir Christopher Heydon's Defence of Judicial Astrology, being that time his chaplain he was so given over to tobacco and drink, that when he had no tobacco, he would cut the bell-ropes and smoke them." [4]

Heydon also wrote but did not publish An Astrological Discourse with Mathematical Demonstrations (c. 1608), a further defence of astrology drawing on Kepler, with a short account of the 1603 conjunction of Saturn and Jupiter. The manuscript passed to the astrologer Nicholas Fiske, whose attempts to publish it failed, but it appeared in an edited form in 1650, subsidised by Elias Ashmole, with a preface by William Lilly. [1]

Heydon's work was given weight by his social standing and the lack of challenges to it. No reply by Chamber appeared, and George Carleton's The Madnesse of Astrologers (1624) was published only twenty years later. [1]

Heydon also made elaborate predictions for 1608 and 1609, which remained unpublished. [1]

Heydon's predictions on European politics were strongly Protestant. He foresaw that Spain would lose the Indies and predicted that the Austrian Habsburgs would fall in 1623 and Rome in 1646: this would lead to the ruin of the Ottomans and the rise of Christ's kingdom, "the fifth Monarchie of the World", in about 1682. [1]

He remained a champion of militant Protestantism to the end.

He had many astronomical interests and was a close friend of the mathematician Henry Briggs and the astronomer John Bainbridge, lending them instruments, sending them astronomical papers, and inviting them to stay at Baconsthorpe. [5] He wrote a treatise on the comet of 1618 and described his own astronomical observations with instruments made by his friend Edward Wright. [1]

Heydon married, first, Mirabel, daughter of the London alderman Sir Thomas Rivet, but she died at the age of twenty-two. Heydon built her a large and ornate tomb at Saxlingham, covered with hieroglyphs which he explained in a treatise now lost. The second son of this marriage was Sir John Heydon, a royalist ordnance officer. He married secondly Anne, daughter of John Dodge and widow of John Potts of Mannington, Norfolk, in or before 1599. She died in 1642. [1]

William Lilly was a seventeenth century English astrologer. He is described as having been a genius at something "that modern mainstream opinion has since decided cannot be done at all" having developed his stature as the most important astrologer in England through his social and political connections as well as going on to have an indelible impact on the future course of Western astrological tradition.

Elias Ashmole was an English antiquary, politician, officer of arms, astrologer and student of alchemy. Ashmole supported the royalist side during the English Civil War, and at the restoration of Charles II he was rewarded with several lucrative offices.

Baconsthorpe Castle, historically known as Baconsthorpe Hall, is a ruined, fortified manor house near the village of Baconsthorpe, Norfolk, England. It was established in the 15th century on the site of a former manor hall, probably by John Heydon I and his father, William. John was an ambitious lawyer with many enemies, and built a tall, fortified house, but his descendants became wealthy sheep farmers and, less worried about any attack, developed the property into a more elegant, courtyard house, complete with a nearby deer park.

Baconsthorpe is a village and civil parish in the English county of Norfolk. It is 4 miles south-east of Holt, 5 miles south of Sheringham and 20 miles north of Norwich. 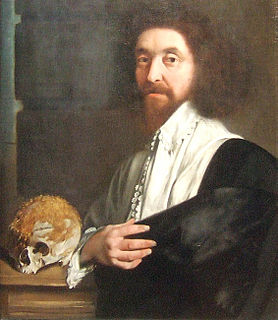 George Carleton was an English churchman, Bishop of Llandaff (1618–1619). He was a delegate to the Synod of Dort, in the Netherlands. From 1619 to 1628 he was Bishop of Chichester. 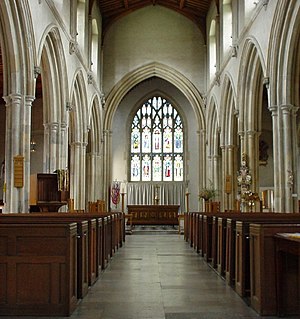 Sir Roger Townshend Kt was an English nobleman, politician, soldier, and knight. He was the son of Sir Richard Townshend and Katherine Browne. He spent much of his career in the service of Thomas Howard, 4th Duke of Norfolk, and Norfolk's son and heir, Philip Howard, 20th Earl of Arundel. He was knighted at sea on 26 July 1588 during the battle against the Spanish Armada.

Sir George Wharton, 1st Baronet was an English Royalist soldier and astrologer. He was also known for his poetry. 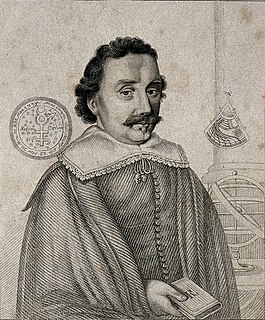 John Booker (1603–1667) was an English astrologer, respected in that career for over 30 years. In the 1640s he was appointed licenser of mathematical publications, and so in effect a censor of astrological works, for the Stationers' Company.

Sir Henry Heydon was the son of John Heydon of Baconsthorpe, Norfolk, 'the well-known opponent of the Paston family'. He married Anne Boleyn, the daughter of Sir Geoffrey Boleyn, great-grandfather of Henry VIII's queen Anne Boleyn.

John Heydon alias Baxter of Baconsthorpe, Norfolk, was of humble origins, the son of a yeoman, William Baxter of Heydon. He became a successful lawyer, and is known, through the Paston Letters, as one of the principal agents in East Anglia of William de la Pole, 1st Duke of Suffolk, and one of the chief opponents of the Paston family.

John Chamber was a fellow of Merton College, Oxford, and later of Eton College, a clergyman of the Church of England and an author, especially on astronomy and astrology. He taught grammar, Greek, and medicine. His name is sometimes given in a Latin form as Johannes Chamberus.