Christopher Kasparek (born 1945) is a Scottish-born writer of Polish descent who has translated works by numerous authors, including Ignacy Krasicki, Bolesław Prus, Florian Znaniecki, Władysław Tatarkiewicz, Marian Rejewski, and Władysław Kozaczuk, as well as the Polish–Lithuanian Constitution of 3 May 1791.

He has published papers on the history of the World War II era; Enigma decryption; Bolesław Prus and his novel Pharaoh ; the theory and practice of translation; logology (science of science); multiple independent discovery; psychiatric nosology; and electronic health records.

Born in Edinburgh, Scotland, to Józef and Stanisława (Sylvia [1] ) Kasparek, Polish Armed Forces veterans of World War II, Kasparek lived several years in London, England, before moving with his family in 1951 to the United States.

Kasparek has translated works by historian of philosophy Władysław Tatarkiewicz ("The Concept of Poetry," 1975; On Perfection, 1979; A History of Six Ideas: an Essay in Aesthetics, 1980); military historian Władysław Kozaczuk (Enigma: How the German Machine Cipher Was Broken, and How It Was Read by the Allies in World War Two, 1984 [2] ); short-story writer, novelist, and philosopher Bolesław Prus ( On Discoveries and Inventions ; several stories; Pharaoh , translated from the Polish, with foreword and notes, by Christopher Kasparek, Amazon Kindle e-book, 2020, ASIN:BO8MDN6CZV); and other Polish authors.

His translations of verse include selected Fables and Parables by Ignacy Krasicki.

A partial list of works written or translated by Christopher Kasparek:

Jerzy Witold Różycki was a Polish mathematician and cryptologist who worked at breaking German Enigma-machine ciphers before and during World War II.

The Cipher Bureau, in Polish: Biuro Szyfrów ([ˈbʲurɔ ˈʂɨfruf], was the interwar Polish General Staff's Second Department's unit charged with SIGINT and both cryptography and cryptanalysis. 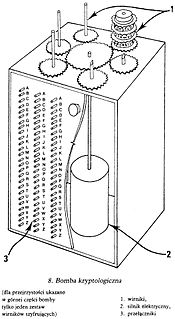 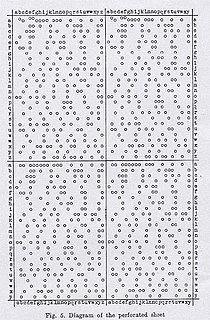 The method of Zygalski sheets was a cryptologic technique used by the Polish Cipher Bureau before and during World War II, and during the war also by British cryptologists at Bletchley Park, to decrypt messages enciphered on German Enigma machines. 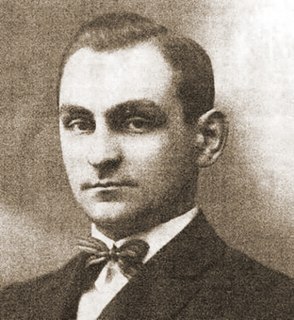 Antoni Palluth was a founder of the AVA Radio Company. The company built communications equipment for the Polish military; the work included not only radios but also cryptographic equipment. Palluth was involved with the German section (BS-4) of the Polish General Staff's interbellum Cipher Bureau. He helped teach courses on cryptanalysis, and he was involved with building equipment to break the German Enigma machine.

The Lacida, also called LCD, was a Polish rotor cipher machine. It was designed and produced before World War II by Poland's Cipher Bureau for prospective wartime use by Polish military higher commands.

Gustave Bertrand (1896–1976) was a French military intelligence officer who made a vital contribution to the decryption, by Poland's Cipher Bureau, of German Enigma ciphers, beginning in December 1932. This achievement would in turn lead to Britain's celebrated World War II Ultra operation.

Władysław Kozaczuk was a Polish Army colonel and a military and intelligence historian.

Richard Andrew Woytak was a Polish–American historian who specialized in European history of the Interbellum and World War II.

The card catalog, or "catalog of characteristics," in cryptography, was a system designed by Polish Cipher Bureau mathematician-cryptologist Marian Rejewski, and first completed about 1935 or 1936, to facilitate decrypting German Enigma ciphers. 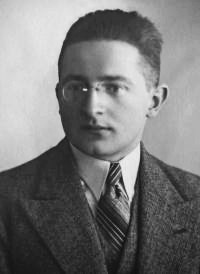 Marian Adam Rejewski was a Polish mathematician and cryptologist who in late 1932 reconstructed the sight-unseen German military Enigma cipher machine, aided by limited documents obtained by French military intelligence. Over the next nearly seven years, Rejewski and fellow mathematician-cryptologists Jerzy Różycki and Henryk Zygalski developed and used techniques and equipment to decrypt the German machine ciphers, even as the Germans introduced modifications to their equipment and encryption procedures. Five weeks before the outbreak of World War II the Poles, at a conference in Warsaw, shared their achievements with the French and British, thus enabling Britain to begin reading German Enigma-encrypted messages, seven years after Rejewski's original reconstruction of the machine. The intelligence that was gained by the British from Enigma decrypts formed part of what was code-named Ultra and contributed—perhaps decisively—to the defeat of Germany.

A Polish Enigma "double" was a machine produced by the Polish Cipher Bureau that replicated the German Enigma rotor cipher machine. The Enigma double was one result of Marian Rejewski's remarkable achievement of determining the wiring of the Enigma's rotors and reflectors.

Ludomir Danilewicz (1905-1960) was a Polish engineer and, for some ten years before the outbreak of World War II, one of the four directors of the AVA Radio Company in Warsaw, Poland. AVA designed and built radio equipment for the Polish General Staff's Cipher Bureau, which was responsible for the radio communications of the General Staff's Oddział II.

Leonard Stanisław Danilewicz was a Polish engineer and, for some ten years before the outbreak of World War II, one of the four directors of the AVA Radio Company in Warsaw, Poland.

The AVA Radio Company was a Polish electronics firm founded in 1929 in Warsaw, Poland. AVA designed and built radio equipment for the Polish General Staff's Cipher Bureau, which was responsible for the radio communications of the General Staff's Oddział II.