Monck was the son and heir of George Monck, 1st Duke of Albemarle (1608–1670) by his wife Anne Clarges (d.1700), a daughter of John Clarges, "Farrier in the Savoy", [1] of Drury Lane, Westminster. Anne's brother was Sir Thomas Clarges (c. 1618–1695), MP, who greatly assisted his brother-in-law, then before his elevation to the dukedom, General George Monck, in bringing about the Restoration of the Monarchy in 1660. She was the presumed widow of Thomas Radford, milliner, of New Exchange, Strand, Westminster, although it was said that her husband was still alive when her son was born. This left a question concerning Monck's legitimacy.

Monck was educated privately and entered Gray's Inn in 1662. [2] From 1660 until his father's death ten years later in 1670, he was known by the courtesy title of Earl of Torrington, one of his father's subsidiary titles.

At the age of 13, Monck entered politics, having been elected Member of Parliament (MP) for Devon in January 1667. In 1670 he was elevated to the peerage and thus entered the House of Lords, following the death of his father, and thereby also inherited his father's peerage titles. He became a Gentleman of the Bedchamber and inherited his father's great feudal title, Lord of Bowland. He was created a Knight of the Garter, a Privy Councillor and in 1675 Lord Lieutenant of Devon, in which latter role he served for ten years. He became a titular colonel of several horse regiments of the English Army. [2]

In 1673 he raised a regiment as part of the Blackheath Army under Marshal Schomberg. It was intended for service in the Dutch Republic, but was disbanded following the Treaty of Westminster before seeing any action.

From 1682 until his death, Monck was Chancellor of the University of Cambridge. [3] In 1685 he resigned the Lord Lieutenancy of Devon to fight against the Monmouth Rebellion, but was largely unsuccessful as a military leader. In 1686, Monck was a major investor in a treasure-seeking expedition headed by William Phips, who had located the wreck of the Spanish treasure ship Nuestra Señora de la Concepción in February 1687. Phips returned to London with more than £200,000 worth of treasure, of which Monck received a 25 percent share. After serving in a few more minor positions, in 1687, Monck was appointed Lieutenant Governor of Jamaica.

On 6 January 1681, Monck arranged a boxing match between his butler and his butcher. This was the first recorded boxing match in England. The butcher won the match. [4]

His Devonshire seat was Potheridge, 3 miles south-east of Great Torrington, a grand mansion re-built by his father circa 1660 [6] on the site of the former manor house occupied by his family since at the latest 1287. [7] It was mostly demolished after the death of the 2nd duchess in 1734 and the surviving section forms the present Great Potheridge farmhouse, inside which however some remnants of the former mansion remain, including two massive 17th-century classical-style doorcases, a colossal overmantel with carved putti and trophies, and a grand staircase. [8]

In 1675 Monck purchased for £26,000 the very grand London townhouse Clarendon House from the heirs of its builder, Edward Hyde, 1st Earl of Clarendon (1609–1674). In 1683 he resold it to a consortium of investors led by Sir Thomas Bond, who demolished it and built on its site Albemarle Street, Bond Street and Dover Street.

At the royal Palace of Whitehall in London on 30 December 1669, shortly before his father's death, Monck married Lady Elizabeth Cavendish (d.1734), eldest daughter and co-heiress of Henry Cavendish, 2nd Duke of Newcastle. She gave birth to a son who died soon after his birth, and Monck left no further surviving children. In 1692 his widow remarried to Ralph Montagu, 1st Duke of Montagu (1638 – c. 1709). She was buried in Westminster Abbey on 11 September 1734. [9] 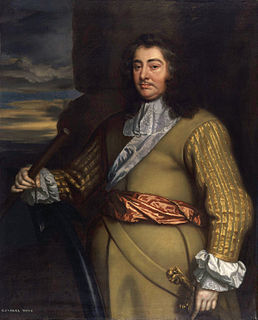 The Dukedom of Albemarle has been created twice in the Peerage of England, each time ending in extinction. Additionally, the title was created a third time by James II in exile and a fourth time by his son the Old Pretender, in the Jacobite Peerage. The name Albemarle is derived from the Latinised form of the French county of Aumale in Normandy, other forms being Aubemarle and Aumerle. It arose in connection with the ancient Norman Counts of Aumale of Aumale in Normandy. See also Earl of Albemarle. 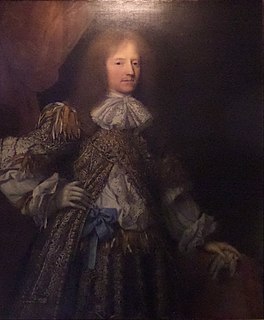 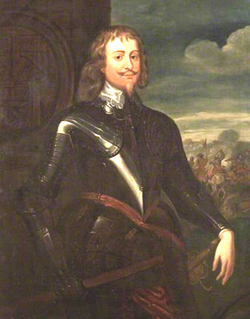 Sir Bevil Grenville, lord of the manors of Bideford in Devon and of Stowe in the parish of Kilkhampton, Cornwall, was a Royalist commander in the Civil War. He was killed in action in heroic circumstances at the Battle of Lansdowne in 1643. He served as a Member of Parliament for the county of Cornwall in 1621–1625 and 1640–1642, and for the borough of Launceston in Cornwall, in 1625–1629 and 1640. 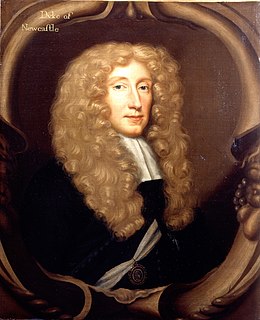 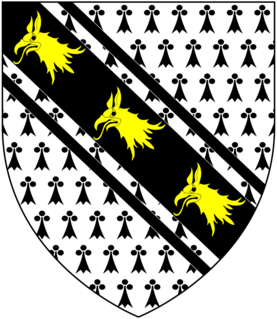 Halsbury is a historic manor in the parish of Parkham in North Devon, England. It is situated 2 miles north-east of the village of Parkham and 4 miles south-west of the town of Bideford. Halsbury was long a seat of the ancient Giffard family, a distant descendant of which was the celebrated lawyer Hardinge Stanley Giffard, 1st Earl of Halsbury (1823–1921), who adopted the name Halsbury for his earldom and was the author of the essential legal reference books Halsbury's Statutes. Halsbury Barton, now a farmhouse, retains 16th and 17th century elements of the former manor house of the Giffard family. It was described in a record of 1560 as a "new dwelling house". 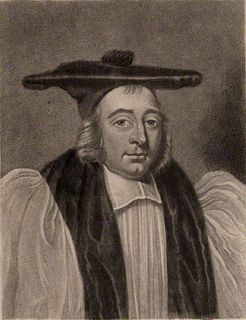 Sir Thomas Clarges was an English politician who sat in the House of Commons at various times between 1656 and 1695. He played an important part in bringing about the Restoration of the Monarchy in 1660. 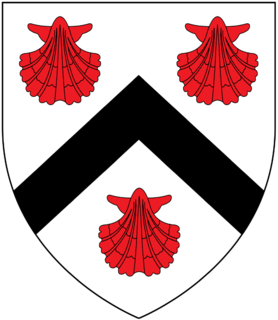 Sir Hugh Pollard, 2nd Baronet was an English soldier and MP elected for Bere Alston in 1640, Callington in 1660, and Devon in 1661. He supported the Royalist cause in the English Civil War. 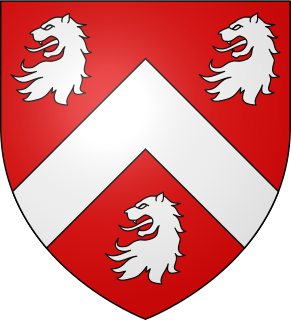 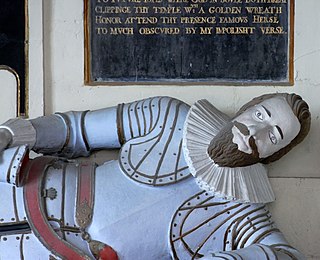 Sir Arthur Acland (1573–1610) of Acland in the parish of Landkey, Devon, was a member of the Devonshire gentry, and was knighted in 1606. Little is known of his life and career, but his monumental inscription survives above his impressive monument in Landkey Church. His son was Sir John Acland, 1st Baronet. He was ancestor to the prominent, wealthy and long-enduring Acland family of Killerton, which survives today in the direct male line. 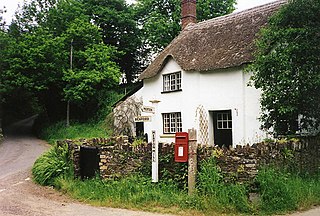 Merton is a village, ecclesiastical parish, former manor and civil parish administered by the local government district of Torridge, Devon, England. The parish, which lies about five miles south east of the town of Great Torrington, is surrounded clockwise from the north by the parishes of Little Torrington, Beaford, Dolton, Huish, Petrockstowe and Peters Marland. In 2001 its population was 331, down from the 507 residents it had in 1901. The eastern and northern boundaries of the parish follow the loops of the River Torridge and the other sides are defined by the River Mere. The village forms part of the electoral ward of Clinton. The population at the 2011 census was 1,537.

Potheridge is a former Domesday Book estate in the parish of Merton, in the historic hundred of Shebbear, 3 miles south-east of Great Torrington, Devon, England. It is the site of a former grand mansion house re-built by George Monck, 1st Duke of Albemarle (1608–1700) circa 1660 on the site of the former manor house occupied by his family since at the latest 1287. It was mostly demolished in 1734 after the death of the widow of his son Christopher Monck, 2nd Duke of Albemarle. 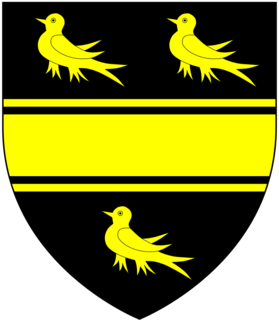 Sir George Smith of Madworthy-juxta-Exeter and Madford House, Exeter, Devon, was a merchant who served as MP for Exeter in 1604, was three times Mayor of Exeter and was Exeter's richest citizen, possessing 25 manors. He was the grandfather of George Monck, 1st Duke of Albemarle (1608-1670) KG and of John Grenville, 1st Earl of Bath (1628–1701).

John Killigrew of Arwenack, near Falmouth in Cornwall, was three times MP for Penryn in 1584, 1586 and 1597, although he rarely attended Parliament. He was Vice-Admiral of Cornwall and like his father and grandfather was Governor of Pendennis Castle (1584–98), but was removed from office due to grave suspicions about his loyalty to the Crown. He was heavily in debt throughout his adult life, and died a ruined man.

Woolleigh is an historic estate in the parish of Beaford, Devon. The surviving mansion house known as Woolleigh Barton, situated 1 3/4 miles north-west of the parish church of Beaford, is a grade II* listed building, long used as a farmhouse. It incorporates remains of a "very fine example of a late Medieval manor house" and retains a "very rich" 15th century wagon roof, a garderobe with the original door, and an attached private chapel with a 17th-century roof.