Christopher Urswick (1448 – 1522) was a priest and confessor of Margaret Beaufort. He was Rector of Puttenham, Hertfordshire, and later Dean of Windsor. Urswick is thought to have acted as a go-between in the plotting to place her son Henry VII of England on the throne.

Urswick was born at Furness in 1448. His father, John Urswick, and his mother were lay brother and sister of Furness Abbey. [1]

He declined the position of Bishop of Norwich in 1498 and was collated Archdeacon of Oxford in 1504.

Amongst his more important positions, Urswick became Rector of the Parish of Hackney in 1502, where he ordered the medieval parish church to be rebuilt. St Augustine's Tower is the only remnant.

He appears as a minor character in Shakespeare's Richard III.

He built a parish house in Hackney (Urswick House, now demolished), where he lived for a time. He is commemorated in Urswick Road in nearby Homerton.

He founded The Urswick School for 12 poor boys, and was until recently called Hackney Free and Parochial School in Hackney Central. [4] The Urswick Chantry in St. George's Chapel commemorates him. [5]

Sir Reginald Bray was an English administrator and statesman. He was the Chancellor of the Duchy and County Palatine of Lancaster under Henry VII, briefly Treasurer of the Exchequer, and one of the most influential men in Henry VII's government and administration. He was an estate officer and senior councillor to both Henry VII and the king's mother, Margaret Beaufort. He was a major benefactor to St George's Chapel, Windsor, where some of the building work for which he provided funds can still be seen and identified. 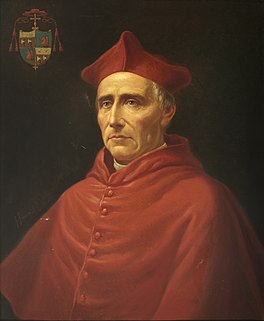 Christopher Bainbridge was an English Cardinal of the Roman Catholic Church. Of Westmorland origins, he was a nephew of Bishop Thomas Langton of Winchester, represented the continuation of Langton's influence and teaching, and succeeded him in many of his appointments, not least as provost of The Queen's College in the University of Oxford. Towards the end of the reign of King Henry VII he was successively Master of the Rolls, a Privy Counsellor, Dean of Windsor and Bishop of Durham. Becoming Archbishop of York in 1508, he was sent as procurator of King Henry VIII to the papal court of Pope Julius II, where he was active in the diplomatic affairs leading to Henry's war with France, and took part in the election of Julius's successor Pope Leo X. He was murdered by poisoning in Italy in 1514, and was succeeded as Archbishop of York by Thomas Wolsey.

John Dolman, Dowman or Dowlman was an English clergyman and benefactor.

St Augustine's Tower stands in St John's Church Gardens, in central Hackney, in the London Borough of Hackney, just off the southern end of the Narrow Way. It is all that remains of the early 16th century parish church of Hackney of St Augustine, which replaced the 13th century medieval church founded by the Knights of St John. The Tower comprises four stages beneath a restored parapet with diagonal buttressing. A fine working 16th century turret clock has remained on the third floor of the Tower since at least 1608. The Tower and contents are Grade I listed.

St John at Hackney is a Grade II* listed Anglican Church in the heart of the London Borough of Hackney with a large capacity of around 2,000. It was built in 1792 to replace Hackney's medieval parish church, of which St Augustine's Tower remains, at the edge of its churchyard. The church faces north towards Clapton Square, with the nearby Sutton House and Hackney Central station also accessible from the churchyard to the east and south, respectively.

Thomas Jane was a medieval Bishop of Norwich. 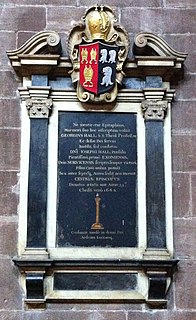 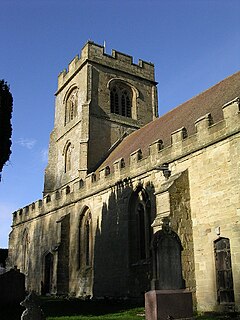 Sir Humphrey Coningsby,, was an English lawyer, a senior judge as a Justice of the King's Bench and a major landholder.

Richard Rawson was Archdeacon of Essex from 1503 and a Canon of Windsor from 1523 to 1543 He was the son of Richard Rawson, a merchant of London and his wife Isabella Craford, and a younger brother of. John Rawson, 1st Viscount Clontarf, Lord Treasurer of Ireland. He received his Bachelor of Canon Law at Cambridge in 1490, followed by a presumed doctorate from the University of Bologna.

The Urswick School is a co-educational secondary school and sixth form located in the Hackney Central area of the London Borough of Hackney, London.