Chubu Electric Power Co., Inc. (中部電力株式会社, Chūbu Denryoku Kabushiki Kaisha ), abbreviated as Chuden in Japanese, is a Japanese electric utilities provider for the middle Chūbu region of the Honshu island of Japan. It provides electricity at 60 Hz, though an area of Nagano Prefecture uses 50 Hz. Chubu Electric Power ranks third among Japan's largest electric utilities in terms of power generation capacity, electric energy sold, and annual revenue. It is also one of Nagoya's "four influential companies" along with Meitetsu, Matsuzakaya, and Toho Gas. Recently, the company has also expanded into the business of optical fibers. On January 1, 2006, a new company, Chubu Telecommunications, was formed.

In May 2011, Prime Minister Naoto Kan requested that the Hamaoka Nuclear Power Plant, which sits in an area considered overdue for a large earthquake, be shut down, after which Chubu Electric Power suspended operations at the plant. A lawsuit seeking the decommissioning of the reactors at the Hamaoka plant permanently has been filed. [1]

In August 2013, Chubu announced it would acquire an 80% stake in the Tokyo-based electricity supplier, Diamond Corp, marking the firm's entry into a market usually associated with Tokyo Electric Power Company. [2]

November 2019 it was announced Chubu had acquired a 20% stake (Mitsubishi the other 80%) in the Dutch energy company Eneco.

In April 2020, the logo mark was renewed. The renewed logo is named "The Beam."

The company has 194 separate generating stations with a total capacity of 32,473 MW.

The company has 182 separate hydro generating stations with a total capacity of 5,217 MW.

The company has 11 separate thermal power stations with a total capacity of 22,369 MW.

On 6 May 2011, Prime Minister Naoto Kan requested the Hamaoka Nuclear Power Plant be shut down as an earthquake of magnitude 8.0 or higher is estimated 87% likely to hit the area within the next 30 years. [3] [4] [5] Kan wanted to avoid a possible repeat of the Fukushima I nuclear accidents. [6] On 9 May 2011, Chubu Electric decided to comply with the government request. In July 2011, a mayor in Shizuoka Prefecture and a group of residents filed a lawsuit seeking the decommissioning of the reactors at the Hamaoka nuclear power plant permanently. [7]

Tokyo Electric Power Company Holdings, Incorporated, also known as Toden or TEPCO, is a Japanese electric utility holding company servicing Japan's Kantō region, Yamanashi Prefecture, and the eastern portion of Shizuoka Prefecture. This area includes Tokyo. Its headquarters are located in Uchisaiwaicho, Chiyoda, Tokyo, and international branch offices exist in Washington, D.C., and London. It is a founding member of strategic consortiums related to energy innovation and research; such as JINED, INCJ and MAI. 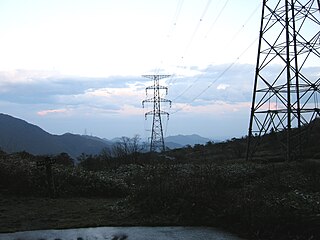 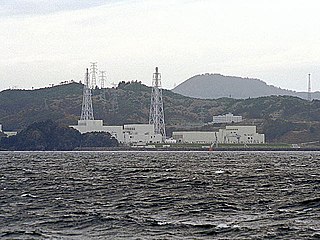 Prior to the 2011 Tōhoku earthquake and tsunami, Japan had generated 30% of its electrical power from nuclear reactors and planned to increase that share to 40%. Nuclear power energy was a national strategic priority in Japan. As of March 2020, of the 54 nuclear reactors in Japan, there were 42 operable reactors but only 9 reactors in 5 power plants were actually operating. A total of 24 reactors are scheduled for decommissioning or are in the process of being decommissioned.

The Hamaoka Nuclear Power Plant is a nuclear power plant in the city of Omaezaki in Shizuoka Prefecture, on Japan's east coast, 200 km south-west of Tokyo. It is managed by the Chubu Electric Power Company. There are five units contained at a single site with a net area of 1.6 km2. A sixth unit began construction on December 22, 2008. On January 30, 2009, Hamaoka-1 and Hamaoka-2 were permanently shut down.

The Sendai Nuclear Power Plant is a nuclear power plant located in the city of Satsumasendai in Kagoshima Prefecture. The two 846 MW net reactors are owned and operated by the Kyūshū Electric Power Company. The plant, like all other nuclear power plants in Japan, did not generate electricity after the nationwide shutdown in the wake of the Fukushima Daiichi nuclear disaster in 2011, but was restarted on August 11, 2015, and began providing power to nearby towns again. Sendai is the first of Japan's nuclear power plants to be restarted.

Tohoku Electric Power Co., Inc. is an electric utility, servicing 7.6 million individual and corporate customers in six prefectures in Tōhoku region plus Niigata Prefecture. It provides electricity at 100 V, 50 Hz, though some area use 60 Hz.

Electricity in Pakistan is generated, transmitted, distributed, and retail supplied by two vertically integrated public sector companies, Water and Power Development Authority (WAPDA) for all of Pakistan, and the Karachi Electric (K-Electric) for the city of Karachi and its surrounding areas. There are around 42 independent power producers (IPPs) that contribute significantly in electricity generation in Pakistan.

Chita Thermal Power Station is a large thermal power station operated by JERA in the city of Chita, Aichi, Japan. 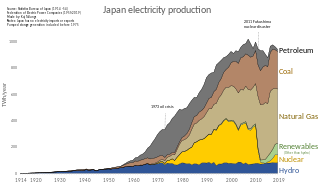 The electric power industry in Japan covers the generation, transmission, distribution, and sale of electric energy in Japan. Japan consumed 995.26 TWh of electricity in 2014. Before the 2011 Fukushima Daiichi nuclear disaster, about one third of electricity in the country was generated by nuclear power. In the following years, most nuclear power plants have been on hold, being replaced mostly by coal and natural gas. Solar power is a growing source of electricity, and Japan has the third largest solar PV installed capacity with about 50 GW as of 2017.

Taketoyo Thermal Power Station is a large thermal power station operated by JERA in the city of Taketoyo, Aichi. Japan. The facility is located at the northern end of Chita Peninsula.

Long one of the world's most committed promoters of civilian nuclear power, Japan's nuclear industry was not hit as hard by the effects of the 1979 Three Mile Island accident (USA) or the 1986 Chernobyl disaster (USSR) as some other countries. Construction of new plants continued to be strong through the 1980s and into the 1990s. However, starting in the mid-1990s there were several nuclear related accidents and cover-ups in Japan that eroded public perception of the industry, resulting in protests and resistance to new plants. These accidents included the Tokaimura nuclear accident, the Mihama steam explosion, cover-ups after accidents at the Monju reactor, and the 21 month shut down of the Kashiwazaki-Kariwa Nuclear Power Plant following an earthquake in 2007. Because of these events, Japan's nuclear industry has been scrutinized by the general public of the country.

The Kan Cabinet was the cabinet governing Japan from June 2010 to September 2011 under the leadership of Prime Minister Naoto Kan, who came into power after winning the DPJ leadership election in June 2010. The Kan Cabinet oversaw the response to the aftermath of the 2011 Tōhoku earthquake and tsunami and the scaling-down of Japan's nuclear energy dependence following the nuclear disaster at TEPCO's Fukushima Daiichi nuclear power plant.

Nishi-Nagoya Thermal Power Station is an LNG-fired thermal power station operated by JERA in the village of Tobishima, Aichi, Japan. The facility is located on reclaimed land at the head of Mikawa Bay. 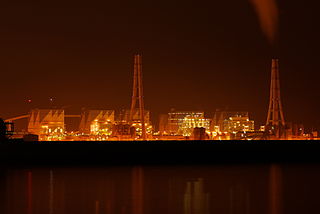 Hekinan Thermal Power Station is a large thermal power station operated by JERA in the city of Hekinan, Aichi, Japan. The facility is located the head of the Chita Peninsula and is currently the largest coal-fired power station in Japan.

Shin-Nagoya Thermal Power Station is a thermal power station operated by JERA in the Minato Ward of the city of Nagoya. Aichi Prefecture. Japan. The facility is located at the northern end of Chita Peninsula.