Charles Richard Walton (July 7, 1941 in Shattuck, Oklahoma – October 6, 1998) was an American football guard who played eight seasons in the National Football League for the Detroit Lions. Previously he played for the Montreal Alouettes and the Hamilton Tiger-Cats of the Canadian Football League. Walton played college football at Iowa State University.

Joseph Frank Walton is a former American football player and coach who most recently retired after 20 years as the head football coach and creator of the football program at Robert Morris University. Walton played eight seasons in the National Football League (NFL) as a pass catching tight end for the Redskins and Giants. He served as head coach of the New York Jets for seven seasons, guiding them to the playoffs twice. He has also served as an assistant coach for the New York Giants, the Washington Redskins, the New York Jets and the Pittsburgh Steelers during a 20-year period.

Simon William Walton is an English footballer who plays as a midfielder for Havant & Waterlooville. He has played in the Football League for Leeds United, Ipswich Town, Cardiff City, Queens Park Rangers, Hull City, Plymouth Argyle, Blackpool, Crewe Alexandra, Stevenage, and Crawley Town. Walton was capped by England at under-16, under-17 and under-19 level.

Walton & Hersham Football Club is a semi-professional football club based in Walton-on-Thames, Surrey. Founded in 1945 following the amalgamation of Walton FC and Hersham FC, they currently play in the Combined Counties League Division One. The club is affiliated to the Surrey County Football Association. 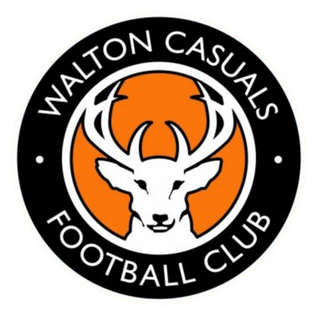 Walton Casuals Football Club is a semi-professional football club based in Walton-on-Thames, Surrey. Founded in 1948, they currently play in the Southern League Premier Division South. The club is affiliated to the Surrey County Football Association, and has been a part of the football pyramid since 1992.

Felixstowe and Walton United Football Club is a football club based in Felixstowe, Suffolk, England. Formed in 2000 by a merger of Felixstowe Port & Town and Walton United, the club are currently members of the Isthmian League North Division and play at Dellwood Avenue.

Peter Walton is an English former professional football referee who officiated in the Premier League from 2003 to 2012. Beginning 2013, he was general manager of the Professional Referee Organization (PRO) in North America until being replaced by Howard Webb in January 2018.

The 2005–06 season was the 91st in the history of the Isthmian League, which is an English football competition featuring semi-professional and amateur clubs from London, East and South East England.

Alvin Earl Walton is a former American football safety in the National Football League (NFL) for the Washington Redskins and the Baltimore Stallions of the Canadian Football League (CFL). He played college football at Mt. San Jacinto College and the University of Kansas. Walton is among a select group who have won both an NFL and CFL championship.

Ernest Alfred Walton was an Australian rules footballer in the VFA and the Victorian Football League (VFL).

The 2008 FA Community Shield was the 86th staging of the FA Community Shield, an annual football match played between the reigning Premier League champions and FA Cup winners. The match was played on 10 August 2008 between 2007–08 Premier League champions Manchester United and 2007–08 FA Cup winners Portsmouth as the "curtain-raiser" to the 2008–09 English football season. The match marked the 100th year since the first Charity Shield, also won by Manchester United after a replay in August 1908.

Shane Scott Walton is a former American college and professional football player who was a safety in the National Football League (NFL) for a single season in 2003. He played college football and soccer for the University of Notre Dame, and was recognized as a unanimous All-American in football. The St. Louis Rams selected him in the fifth round of the 2003 NFL Draft. 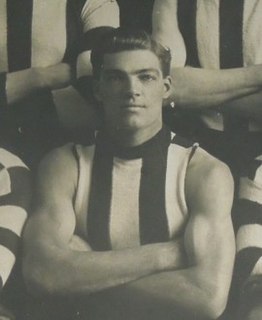 William Henry Walton was an Australian rules footballer who played with Collingwood in the Victorian Football League (VFL).

Ben Walton is a former Australian rules footballer who played with St Kilda in the Australian Football League (AFL). 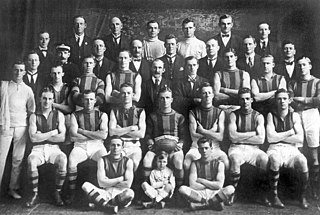 The 1922 Victorian Football Association season was the 44th season of the Australian rules football competition. The premiership was won by the Port Melbourne Football Club, after it defeated Footscray by two points on 23 September, in a controversial Grand Final which several of its players were offered money to throw. It was the club's third VFA premiership.

Christian Timothy Walton is an English professional footballer who plays as a goalkeeper for Premier League club Brighton & Hove Albion. He has represented England at under-19, under-20 and under-21 levels.