Ciao Bella Cinquetti (チャオ ベッラ チンクエッティ, Chao Berra Chinkuetti), formerly known as The Possible (THEポッシボー, The Posshibō), was a Japanese idol group originally formed on August 2, 2006, [1] with six girls from Hello! Project's trainee group, Hello Pro Egg. After releasing several indie singles, they graduated from trainee status on October 7, 2007, and debuted as part of Nice Girl Project!. [2] In 2014, they participated in supergroup Team Makenki with You Kikkawa and Up Up Girls Kakko Kari.

After Nice Girl Project!'s activities ended in 2015, they were transferred to Up-Front Works and changed their name to "Ciao Bella Cinquetti" following the release of their new single on July 8. [3] They disbanded on August 2, 2018. [4] [5]

The Possible was announced as a trainee unit on August 2, 2006, during the stage play Cry For Help at the Tsunku Town Theater. Kanami Morozuka, Aina Hashimoto, and Yurika Akiyama, three girls from Hello! Project's trainee group, Hello Pro Egg, were announced as members of the group. Kaede Ohse was announced as a member in September 2006, while Robin Shoko Okada and Yuki Goto were added to the group on October 1, 2006. While performing as back-up dancers for Hello! Project's concerts, The Possible released their first indies single, "Young Days!", on October 22, 2006, followed by with "Hatsukoi no Kakera" on December 10.

In 2007, The Possible graduated from trainee status and debuted under Tsunku's newest supergroup, Nice Girl Project! [2]

Kaede Ohse announced in her blog on June 6, 2009, that she would be leaving The Possible and Nice Girl Project! on August 22 to focus on her studies. She withdrew from activities on June 15.

On April 4, 2013, Robin Shoko Okada announced on her blog that she had been named leader of The Possible. [6]

In 2015, Nice Girl Project!'s activities ended and The Possible were transferred to Up-Front Works, changing their name to "Ciao Bella Cinquetti" with the release of their single, "Omotesandou/Futakotamagawa/Never Never Give Up". [3] On August 10, Yurika Akiyama left the group.

Ciao Bella Cinquetti released a statement on April 24, 2018, mentioning that they were disbanding in August. [4] [5] They performed at Team Makenki's final concert in July [7] and held their final concert on August 2 with Ohse and Akiyama appearing as special guests. [8] [9]

Yuka Iguchi is a Japanese voice actress and singer. 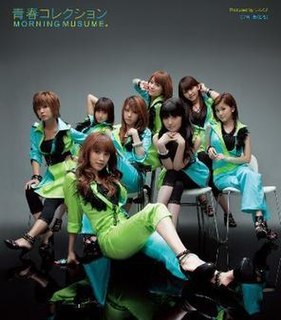 "Seishun Collection" is a song recorded by Japanese pop girl group Morning Musume. Written and produced by Tsunku, it was released on June 9, 2010 by Zetima in four editions: the normal edition and limited A, B, and C versions. The limited editions each contain a different version of the promotional video.

"Onna to Otoko no Lullaby Game" is the 44th single by J-pop girl group Morning Musume. It is the last single to feature Eri Kamei, Junjun and Linlin prior to their graduation. The single was released in four editions: Limited A, B and C, and normal. The limited editions each came with a different DVD. The limited edition releases, as well as the first press of the normal edition, also came with an event serial number card. The Single V was released on November 24, 2010. The single debuted at #6 on the weekly Oricon charts, selling a reported total of 42,405 copies in the first week.

You Kikkawa is a Japanese singer and actress. Kikkawa achieved early fame portraying Kobeni Hanasaki from Kirarin Revolution Stage 3 and later debuted as a solo singer with the song, "Kikkake wa You!"

"One Two Three / The Matenrō Show" is the 50th single by the J-pop group Morning Musume. It was released in Japan on July 4, 2012. 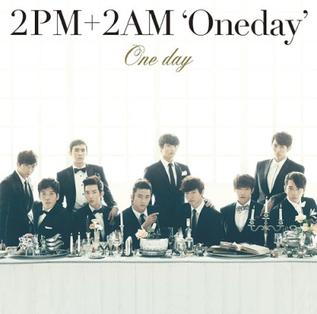 Sweet Arms is a Japanese voice actor unit that consists of four members. They are affiliated with Kami Records and Nippon Columbia.

NogiBingo!, stylized as NOGIBINGO!, was a Japanese television variety show starring Japanese idol girl group Nogizaka46. Ijiri Okada, who is known for AKB48-related shows such as AKB48 Nemōsu TV, hosts the program. The show first aired on July 3, 2013, as part of the variety show Nogizaka46 x HKT48 Kanbangumi Battle!, and it became an independent show starting with the second season.

"Tachiagirl" is the 7th major single by the Japanese girl idol group S/mileage. It was released in Japan on September 28, 2011 on the label Hachama. 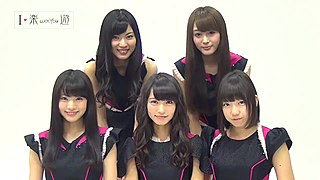 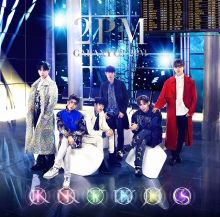 Galaxy of 2PM is the fifth Japanese studio album by South Korean boy band 2PM. It was released on April 27, 2016 in five editions: 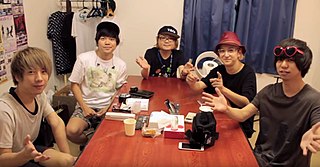 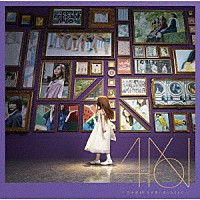 Ima ga Omoide ni Naru made is the fourth album by Japanese idol girl group Nogizaka46. It was released on 17 April 2019. The album reached the top position on the weekly Oricon Albums Chart, with 446,618 copies sold. It also reached number one on the Billboard Japan Hot Albums and Top Albums Sales charts.

30th Anniversary Final Project "The Singles" Day 1・Day 2 Live 2018 Complete Version is a live video by Japanese singer/songwriter Chisato Moritaka. Recorded live at the Hitomi Memorial Hall in Setagaya, Tokyo on May 27 to 28, 2018, the video was released on May 22, 2019 by Warner Music Japan on Blu-ray and DVD formats, each offered with an optional photobook. In addition, RecoChoku offered limited edition releases of the video containing four CDs and an original poster. The video features Moritaka performing her 2012 compilation album The Singles in its entirety as the final stage of her 30th anniversary celebration.