City Tower is the tallest skyscraper in Prague (Pankrác district) and in Bohemia, and the second tallest one in the Czech Republic standing on the Pankrác Plain with a height of 109 meters. [1]

In later years Český rozhlas tried to sell the uncompleted building. In 1996, an agreement was signed with the company NIKO to sell the building for 1 billion CZK, but subsequently failed to pay the agreed amount. A similar scenario happened one year later with the Singaporean company Wells Holding and an agreed selling price of 550 million CZK. Finally the building was sold in 1999 to the company ECM for just 285 million CZK.

After a long planning process and legislative planning steps the radical reconstruction of the building, designed by Richard Meier, began in 2005 and was completed in 2008. On 20 December 2007 the building obtained final building approval. The first tenants started to move into the building at the beginning of 2008. [4] The largest renter is Raiffeisenbank, a.s. which occupies 10 floors of the building with about 1200 employees. [5] [6]

Over 2300 tons of new steel structures were used for its reconstruction. The facade consists of 30,500 m² of glass sheets. 800 parking spaces were built in the underground floors. There are 18 lifts in the building. Elevators reach speeds of up to 6 meters per second and the official web page claims they are the fastest lifts in the Czech Republic. [7] On the 27th floor is the highest restaurant in the Czech Republic, it has been since 2013 repeatedly awarded Michelin's Bib Gourmand award. [8]

In 2009 ECM sold City Tower for €130 millions to Czech company Marpona a.s. Transaction was backed up by J&T. [9] In 2012, the building was sold again, to company Consideratio which belongs under holding Proxy-Finance. The price was not published. 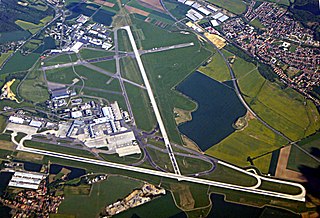 Vladimír Železný is a Czech businessman and politician. He was the first CEO of TV NOVA, a popular Czech television station and was a member of the European Parliament between 2004 and 2009. As a media mogul with political influence, he has been compared to Rupert Murdoch and Silvio Berlusconi. He was convicted of tax evasion in 2007.

Stanislav Gross was a Czech lawyer and politician who served as Prime Minister of the Czech Republic and Leader of the Czech Social Democratic Party from 2004 until 2005 when he resigned as a result of his financial irregularities. He previously served as Minister of the Interior in cabinets of Miloš Zeman and Vladimír Špidla from 2000 to 2004. Gross was Member of the Chamber of Deputies (MP) from 1992 to 2004.

České dráhy, often shortened to ČD, is the major railway operator in the Czech Republic providing regional and long-distance services.

Český rozhlas (ČRo) is the public radio broadcaster of the Czech Republic, operating since 1923. The service broadcasts throughout the Czech Republic nationally and locally. Its four national services are Radiožurnál, Dvojka, Vltava and Plus.

An illicit broadcast from the radio studio in Prague helped spark the Prague uprising during the final days of World War II, but German counterattacks led to a pitched battle breaking out. The conflict became known as the Battle for Czech Radio. By controlling the radio, the Czech resistance was able to inform and inspire the people of Prague to effective action during the Prague uprising. German forces were unable to prevent the Czechs from broadcasting. However, the attempts to appeal to Russians and Americans for aid were unsuccessful.

PPF Group N.V. is a privately held international financial and investment group founded in 1991 in Czechoslovakia and residing in the Netherlands. PPF Group invests in multiple market segments such as financial services, telecommunications, biotechnology, real estate and mechanical engineering. The reach of PPF Group spans from Europe to North America and across Asia. It is active in the Czech Republic, Slovakia, Serbia, Hungary, Montenegro, Netherlands, Bulgaria, Croatia, Poland, Romania, Slovenia, Russia, Kazakhstan, Finland, Germany, India, Indonesia, Vietnam, Philippines, China, France, United Kingdom and the US. The founder and majority shareholder, Petr Kellner (98.93%), was also estimated to be the wealthiest person in Czech Republic until his death in March 2021, according to Forbes magazine. The other two shareholders, Ladislav Bartoníček and Jean-Pascal Duvieusart, each hold a 0.535% share.

Baťa's Skyscraper, also known as Building No. 21, is a skyscraper in Zlín, Czech Republic. It is 77.5 metres high and has sixteen floors. It was the administration building of the Bata Shoes factory, a company that was based in the city. Now it is headquarters of the Zlín Region.

ECM Real Estate Investments A.G. is bankrupted real estate developer based in Luxembourg, that was active mostly in Czech Republic, but also in China, Poland or Russia. 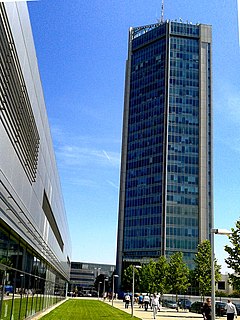 City Empiria, is a skyscraper in Prague. It is the third tallest building in the Czech Republic at 104 meters. The antenna reaches a height of 132 m. It was opened in 1977 as the headquarters of Czechoslovak trade company Motokov.

Line D is a proposed line of the Prague Metro, serving Prague 4 and Prague 12 in the south of the Czech capital. The first part of the chronologically fourth (blue) line in the system is planned to be built in 2019–2023.

Hotel Olympik is a large hotel in the Karlín area of the 8th district of Prague, Czech Republic. The hotel is near the housing facility Invalidovna and the stadium of Čechie Karlín. Hotel Olympik is located at 138 Sokolovská Street.

V Tower is a high-rise building in Prague, Czech Republic. It is the tallest residential building in the Czech Republic with 104 meters in height and 30 floors. Construction started in 2016 and ended in 2018. It was designed by Czech architect Radan Hubička and the main investor was Aceur Investment. 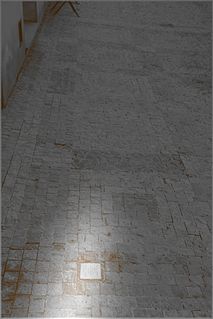 Rezidence Eliška is highrise residential building in Prague district Vysočany. It is 93.6 metres (307 ft) tall. Construction started in 2011 and ended in 2013. It has 25 floors above ground and 2 under ground. There are 350 flats inside the building. It was designed by Czech architect Ivan Sládek, the cost was 500 million CZK. 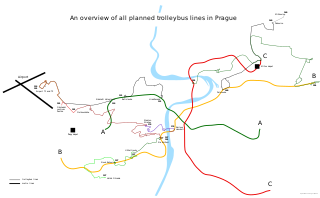 Jinčov castle are the remaining ruins of a castle located about 25 km to the west of Prague, Czech Republic. The castle ruins are situated at an altitude of 340 m above sea level, in the Vůznice National Nature Reserve, about 2 km south from the village of Běleč. It is protected as a cultural monument of the Czech Republic.

Václav Aulický is a Czech architect and university professor. He is a graduate of the Faculty of Civil Engineering of the Czech Technical University in Prague. His buildings have hi-tech and postmodern elements.