A city manager is an official appointed as the administrative manager of a city, in a "Mayor–council government" council–manager form of city government. Local officials serving in this position are sometimes referred to as the chief executive officer (CEO) or chief administrative officer (CAO) in some municipalities. [1]

In a technical sense, the term "city manager," in contrast to "chief administrative officer" (CAO), implies more discretion and independent authority that is set forth in a charter or some other body of codified law, as opposed to duties being assigned on a varying basis by a single superior, such as a mayor. [2]

As the top appointed official in the city, the city manager is typically responsible for most if not all of the day-to-day administrative operations of the municipality, in addition to other expectations. [3] [4]

Some of the basic roles, responsibilities, and powers of a city manager include:

The responsibilities may vary depending upon charter provisions and other local or state laws, rules, and regulations. In addition, many states, such as the states of New Hampshire and Missouri, have codified in law the minimum functions a local "manager" must perform. [6] The City Manager position focuses on efficiency and providing a certain level of service for the lowest possible cost. [7] The competence of a city manager can be assessed using composite indicators. [8]

Manager members of the International City/County Management Association (ICMA) are bound by a rather rigid and strongly enforced code of ethics that was originally established in 1924. Since that time the code had been up-dated/revised on seven occasions, the latest taking place in 1998. The updates have taken into account the evolving duties, responsibilities, and expectations of the profession; however the core dictate of the body of the code--"to integrity; public service; seek no favor; exemplary conduct in both personal and professional matters; respect the role and contributions of elected officials; exercise the independence to do what is right; political neutrality; serve the public equitably and governing body members equally; keep the community informed about local government matters; and support and lead our employ-ees"—have not changed since the first edition. [9]

Most sources trace the first city manager to Staunton, Virginia [10] in 1908. Some of the other cities that were among the first to employ a manager were Sumter, South Carolina (1912) and Dayton, Ohio (1914); Dayton was featured in the national media, and became a national standard. The first "City Manager's Association" meeting of eight city managers was in December 1914. [11] The city manager, operating under the council-manager government form, was created in part to remove city government from the power of the political parties, and place management of the city into the hands of an outside expert who was usually a business manager or engineer, with the expectation that the city manager would remain neutral to city politics. By 1930, two hundred American cities used a city manager form of government. [12]

In 1913, the city of Dayton, Ohio suffered a great flood, and responded with the innovation of a paid, non-political city manager, hired by the commissioners to run the bureaucracy; civil engineers were especially preferred. Other small or middle-sized American cities, especially in the west, adopted the idea.

In Europe, smaller cities in the Netherlands were specially attracted by the plan. [13]

By 1940, there were small American cities with city managers that would grow enormously by the end of the century: Austin, Texas; Charlotte, North Carolina; Dallas, Texas; Dayton, Ohio; Rochester, New York; and San Diego, California. [14]

In the early years of the profession, most managers came from the ranks of the engineering professions. [15] Today, the typical and preferred background and education for the beginning municipal manager is a master's degree in Public Administration (MPA), and at least several years' experience as a department head in local government, or as an assistant city manager. As of 2005, more than 60% of those in the profession had a MPA, MBA, or other related higher-level degree. [16]

The average tenure of a manager is now 7–8 years, and has risen gradually over the years. Tenures tend to be less in smaller communities and higher in larger ones, and they tend to vary as well, depending on the region of the country. [16] [17]

The government of the U.S. state of Ohio consists of the executive, judicial, and legislative branches. Its basic structure is set forth in the Constitution and law of Ohio.

Since its creation as a town in the 18th century, the Politics of Dayton, Ohio have adapted to and reflected the changing needs of the community, from the Miami and Erie Canal through the World War II "Dayton Project" to the present day.

The Optional Municipal Charter Law or Faulkner Act provides New Jersey municipalities with a variety of models of local government. This legislation is called the Faulkner Act in honor of the late Bayard H. Faulkner, former mayor of Montclair, New Jersey and chairman of the Commission on Municipal Government.

In the United States, a charter city is a city in which the governing system is defined by the city's own charter document rather than solely by general law. In states where city charters are allowed by law, a city can adopt or modify its organizing charter by decision of its administration by the way established in the charter. These cities may be administered predominantly by residents or through a third-party management structure, because a charter gives a city the flexibility to choose novel types of government structure. Depending on the state, all cities, no cities, or some cities may be charter cities.

The Chief Executive of a city or county is the senior permanent official in local government in the Republic of Ireland. Whereas the county council and city council are elected officials who formulate policy, the chief executive is an appointed official who manages the implementation of policy. The position was introduced in 1929–42 based on the American council–manager government model, and until 2014 the chief executive was styled the county manager or city manager. Their salaries range from €132,511 to €189,301 per annum. The County and City Management Association is the professional association for chief executives, and it is affiliated to the International City/County Management Association (ICMA).

International City/County Management Association is an association representing professionals in local government management. It is based in Washington, D.C., USA. 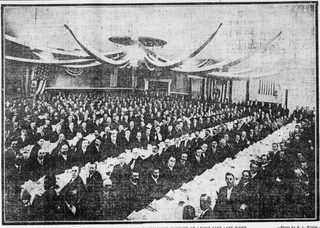 The United States has a history of citizen, nonprofit, and other non-partisan groups advocating good government that reaches back to the late-19th-century municipal-level Progressive Movement and the development of governmental professional associations in the early part of the 20th century, such as the American Public Human Services Association and the International City/County Management Association. Many of these groups had their genesis at the Public Administration Center at 1313 East 60th Street, at the University of Chicago.

The mayor–council government system is a system of organization of local government that has an executive mayor who is directly elected by the voters, and a separately elected legislative city council. It is one of the two most common forms of local government in the United States, and is also used in Brazil, Canada, Italy, Israel, New Zealand, Poland and Turkey. It is the one most frequently adopted in large cities, although the other form, council–manager government, is the local government form of more municipalities.

In local government in the United States, a county administrator or county manager is a person appointed to be the administrative manager of a county, in a council–manager form of county government.

Walter A. Scheiber played an influential role in the development of regional government in the United States, as the first executive director of the Metropolitan Washington Council of Governments (1966-1991). During his leadership of the council, he led a number of cooperative regional initiatives on issues including air and water pollution, housing and cooperative purchasing; his advocacy to Congress helped support the creation of the Metro transit system in the Washington, D.C. area. The Washingtonian called him "the primary architect of regional planning and cooperation in Washington." On his retirement in 1991, a Washington Post editorial referred to him as a "'consummate professional, a superb diplomat,'" who was "held in the highest regard by professional colleagues across the country." He played a key role in founding the National Association of Regional Councils (NARC) and, having spent a decade before joining MWCOG as a city manager, was very active in the International City and County Management Association (ICMA).