The City of Darebin is a local government area in Victoria, Australia, in the northern suburbs of Melbourne. It has an area of 54 square kilometres (20.8 sq mi) and in June 2018 Darebin had a population of 161,609. [1] Municipal offices are located at 350 High Street, Preston.

Darebin was rated 386th of 590 Australian Local Government Areas in the BankWest Quality of Life Index 2008. [2]

The 2012 Business Register states that Darebin currently has 11,575 businesses operating within the region. These businesses create 55,278 jobs for locals and residents of Melbourne, and the Darebin area itself has 74,291 employed residents. Darebin had a Gross Regional Product of A$5.23 billion in 2012, a 0.3% increase on the previous year. Since 2001, approximately A$1 billion of extra GRP has been created in the region. [3] The biggest exports in Darebin are:

Since 2006, gentrification in the Darebin area has seen average incomes and property values increase significantly in the region, particularly in the suburbs of Northcote, Fairfield, Alphington and Thornbury. As a result, there has been a dramatic change in the economy of Darebin and the types of businesses that operate. For example, since 2006, there has been increases in the total exports of the following industry sectors: [3]

Darebin also experienced growth thanks to the mining boom, with a 57% increase in mining-relating exports from 2006 to 2012, despite there being no mines in the municipality.

Of the 11,575 registered businesses in Darebin, the most common industry sectors are:

As of 2012, Darebin has 144,086 residents living in its boundaries which include 5,344 hectares or 53 km². This gives the area of Darebin a population density of 26.96 persons per hectare. Darebin residents have a median age of 36 and earn on average $1,178 per week. According to the 2011 Australian Bureau of Statistics census, in Darebin: [4]

The most common occupations in Darebin are:

Darebin has a diverse multicultural population, with 33.7% of residents being born overseas. The most common countries of birth are: [6]

26% of Darebin residents also arrived in Australia within the last 5 years.

Darebin as a region is home to many environmentalists, and this, along with Darebin's proximity to the Melbourne CBD, is reflected in the transportation methods used by Darebin residents compared to Melbourne as a whole. Most residents still drive to work, with 50.1% of residents driving alone to work, however this is 10% lower than the Greater Melbourne average. Furthermore, 14.2% of Darebin residents travel to work by bus, compared to 11.9% in the rest of Melbourne. Darebin residents also walk to work, cycle to work or catch other modes of public transport more often than the rest of Melbourne. Since 2006, the largest single increase in transportation use has been in train travel, with 2,423 more residents catching the train, compared to 2,416 new vehicle drivers. This is the largest increase in Victoria. [7]

Until the 2016 elections, Darebin Council elections were dominated by the Labor Party (ALP). At the first City of Darebin election in 1996 and at subsequent elections in 1998, 2002 and 2004 only ALP member candidates were successful. The ALP endorsed candidates for the very first Darebin Council elections, but in subsequent elections the local party organisation supported particular candidates in each contested ward. The decision of the party not to endorse candidates almost certainly arises from the performance of the very first elected council, in which a deal between ALP factions determined the preselection of the party's council candidates. [8]

Dissatisfaction with the performance of the first Darebin Council led to the Kennett Government holding an Inquiry under David Elsum, which reported to the Victorian Parliament in April 1997. [9] The Elsum Report found that factional differences led to poor governance on the Council. As a result, the Kennett Government sacked the Council and appointed a commissioner, but decided to return to an elected council about eighteen months later in 1998.

The council consisted of nine single-Councillor wards at each of the four elections totally dominated by the ALP. In 2008, following a representation review by the Victorian Electoral Commission (VEC), Darebin was divided into three wards comprising three councillors in each elected by proportional representation. For the first time the ALP stranglehold was broken with the election of Trent McCarthy, a Greens candidate, to the Rucker Ward. In 2012, the ALP stranglehold was further weakened with the election of independents Julie Williams and Bo Li elected to the Cazaly Ward, along with Oliver Walsh, a Liberal Party member, elected to the Rucker Ward. Later in that term, Vince Fontana of Cazaly Ward and Gaetano Greco of La Trobe Ward quit the ALP, leaving only three ALP members, Tim Laurence, Steven Tsitas and Angela Villella, on the Council.

The first election in 1996 was by attendance voting. Postal voting has been used at each subsequent election.

ALP factions provided much of the interest in Darebin politics, given that the ALP has traditionally been in a commanding position within the municipality. Two councillors elected from the Right or Labor Unity faction, Nazih Elasmar and Marlene Kairouz, were subsequently elected to the Victorian Parliament. Both Elasmar and Kairouz have at various times served as Mayor of Darebin, Kairouz having held the office of Mayor on two occasions.

At the first Darebin Council Election no faction held control, with four councillors from the Preston area being members of the Labor Unity (Right) faction, four councillors from the Northcote area being members of the Socialist Left, and one Councillor from the Preston area being a member of the Pledge faction, a breakaway group from the Socialist Left frequently voting with the Right. [10] After elections in 1998, 2002 and 2004 the Labor Unity group held almost all Council positions, but complications existed within Labor Unity as two sub-factions competed for dominance and for the election of Mayor. In 2008, with the introduction of the proportional representation voting system, no faction again held dominance.

Coming into effect at the 2020 council elections, Darebin was divided into nine single-member wards, each elected through preferential voting. Prior to this, councillors were elected from three multi-member wards. [11]

Darebin celebrates the artistry and diversity of the community with regular festivals and events such as the Darebin Music Feast and the High Vibes festival. The city also funds community music, such as the Preston Symphony Orchestra and public artwork, such as the Fairfield Industrial Dog Object. [12]

The Preston Markets are a central feature of Darebin and attract people from all around the area.

In August 2017 the City of Darebin followed the City of Yarra Council in deciding not to celebrate Australia Day events. This was criticised by conservative commentators, [13] [14] with the Federal government subsequently removing the council's powers to hold citizenship ceremonies. [15]

In the lead-up to the Australian Marriage Law Postal Survey the council announced it will allow pro same-sex marriage campaigners to use its facilities and services (for free) and deny this access to those of an alternate view. This was criticised by conservative commentators but welcomed by community members. [16]

The council subsequently reversed its plans to oppose those campaigning for the 'no' vote. [17]

Men banned from applying for job

In September 2021, it was widely reported in the Australian media that the Darebin City Council had banned men from applying for a new position despite being an "equal opportunity employer". [18] [19]

The City of Yarra is a local government area (LGA) in Victoria, Australia in the inner eastern and northern suburbs of Melbourne. It is the second smallest LGA in the state with an area of 19.5 square kilometres (7.5 sq mi), and in June 2018 it had a population of 98,521, making it the second most densely populated LGA, with around 5,040 people per square kilometre. The City of Yarra was formed in 1994 as a result of the amalgamation of the former Cities of Richmond, Collingwood, Fitzroy, and parts of Carlton North and parts of Alphington and Fairfield.

The Shire of Yarra Ranges, also known as Yarra Ranges Council, is a local government area in Victoria, Australia, located in the outer eastern and northeastern suburbs of Melbourne extending into the Yarra Valley and Dandenong Ranges. It has an area of 2,468 square kilometres (953 sq mi), of which 3% is classified as urban. In June 2018, it had a population of 158,173.

The City of Whittlesea is a local government area located in the outer northern suburbs of Melbourne, the state capital of Victoria, Australia. The city covers an area of 490 square kilometres (189.2 sq mi), and in June 2018, it had a population of 223,322.

The City of Banyule is a local government area in Victoria, Australia in the north-eastern suburbs of Melbourne. It was created under the Local Government Act 1989 and established in 1994 as an amalgamation of former councils. It has an area of 63 square kilometres (24.3 sq mi) and lies between 7 and 21 km from central Melbourne. In 1994 it had a population of 116,000. In June 2018 Banyule had a population of 130,237. The Yarra River runs along the City's southern border while its western border is defined by Darebin Creek.

The City of Melbourne is a local government area in Victoria, Australia, located in the central city area of Melbourne. In 2018, the city has an area of 37 square kilometres (14 sq mi) and had a population of 169,961. The city's motto is "Vires acquirit eundo" which means "She gathers strength as she goes."

Fairfield is a suburb in Melbourne, Victoria, Australia, 6 km (3.7 mi) north-east of Melbourne's Central Business District, located within the Cities of Darebin and Yarra local government areas. Fairfield recorded a population of 6,535 at the 2021 census.

Alphington is a suburb in Melbourne, Victoria, Australia, 7 km (4.3 mi) north-east of Melbourne's Central Business District, located within the Cities of Darebin and Yarra local government areas. Alphington recorded a population of 5,702 at the 2021 census.

Northcote is an inner-city suburb in Melbourne, Victoria, Australia, 7 km (4.3 mi) north-east of Melbourne's Central Business District, located within the City of Darebin local government area. Northcote recorded a population of 25,276 at the 2021 census. 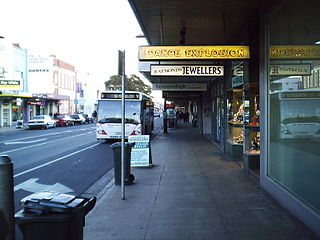 Preston is a suburb in Melbourne, Victoria, Australia, 9 km (5.6 mi) north-east of Melbourne's Central Business District, located within the City of Darebin local government area. Preston recorded a population of 33,790 at the 2021 census.

Thornbury is an inner-city suburb in Melbourne, Victoria, Australia, 7 km (4.3 mi) north-east of Melbourne's Central Business District, located within the City of Darebin local government area. Thornbury recorded a population of 19,005 at the 2021 census.

Socialist Action, known until October 2019 as the Socialist Party, was a Trotskyist political party in Australia. It published a monthly magazine called The Socialist which contained a socialist perspective on news and current issues.

Lidia Serafina Argondizzo is an Australian politician. She was the Labor Party (ALP) member of the Victorian Legislative Council representing Templestowe Province from 2002 to 2006.

Frank Noel Wilkes was an Australian politician who served as the Leader of the Labor Opposition in Victoria from 1977 to 1981.

The City of Coburg was a local government area about 10 kilometres (6 mi) north of Melbourne, the state capital of Victoria, Australia. The city covered an area of 19.44 square kilometres (7.51 sq mi), and existed from 1859 until 1994.

The City of Northcote was a local government area about 5 kilometres (3 mi) northeast of Melbourne, the state capital of Victoria, Australia. The city covered an area of 17.62 square kilometres (6.80 sq mi), and existed from 1883 until 1994.

The City of Preston was a local government area about 11 kilometres (7 mi) north-northeast of Melbourne, the state capital of Victoria, Australia. The city covered an area of 37.05 square kilometres (14.31 sq mi), and existed from 1871 until 1994.

Local government in the Australian state of Victoria consists of 79 local government areas (LGAs). Also referred to as municipalities, Victorian LGAs are classified as cities (34), shires (38), rural cities (6) and boroughs (1). In general, an urban or suburban LGA is called a city and is governed by a City Council, while a rural LGA covering a larger rural area is usually called a shire and is governed by a Shire Council. Local councils have the same administrative functions and similar political structures, regardless of their classification.

Luba Grigorovitch is an Australian trade unionist and politician. She represents the district of Kororoit in the Victorian Legislative Assembly. She is a member of the Labor Party and was elected in the 2022 state election, after replacing retiring MLA Marlene Kairouz. She is a former Victorian state secretary of the Rail, Tram and Bus Union (RTBU).