City of regional significance (Ukrainian : Місто обласного значення, Misto oblasnoho znachennya) was a city municipality that was designated as a separate district within its region (i.e. oblast, Crimea). In Crimea, these cities were referred to as cities of republican significance, while in regular oblasts those municipalities were referred to as cities of oblast significance. The designation of regional significance was created with the introduction of oblasts in 1932 and abolished in 2020 following a new administrative reform that reshaped raions (see List of raions of Ukraine).

Such city municipality was complex and usually combines the city proper as well as the adjacent populated places. The city of regional (oblast) significance was governed by a city council known as mis'krada which was chaired by a mayor. There were instances where a municipality may include only the city alone (city proper), while in others instances a municipality might consists of its own subdivisions such as districts in city, similarly to the cities with special status or even other cities which carry designation of cities of district significance.

Each region had at least one city of regional significance as its administrative center. A city was usually granted the status for being an economical and cultural center that has a developed industry, utilities, a considerable amount of state provided housing, and a population of over 50,000, and if for further economical and social development of a city it was appropriate to establish a direct management by regional organizations. In some cases, a city with a population of less than 50,000 could be a city of regional significance if it had important industrial, social-cultural, and historical significance, or a propensity for further economical and social development and population increase. These exceptions were usually granted on a decision of the Supreme Council of Ukraine –Verkhovna Rada.

The city could be divided into districts at the city's authorities' discretion. Along with raions of a region, the cities of regional significance are the second level of administrative-territorial division of Ukraine. Beside having districts, the city can be divided into various municipal councils (rada, often considered its extended metropolitan area and suburbs) such as smaller city councils, town councils, or rural councils. Additionally, a city of regional significance can simply be composed of one settlement itself.

In 2012, there were 178 cities of regional significance across the different regions of Ukraine, ranging from the Donetsk Region, which has the highest number of cities at 28, to the Ternopil Region, which has only one, Ternopil. On average there are seven cities in each oblast or Crimea.

Population statistics are from the 2001 Ukrainian Census. An asterisk (*) indicates cities that have district division.

Lyman Raion was a raion (district) within Donetsk Oblast in eastern Ukraine. Its administrative center was Lyman, which was separately incorporated as a city of oblast significance and did not belong to the district. Its area was 1,018 km2 (393 sq mi) and its population was approximately 21,881 (2013 est.) .

The Yevpatoria City Municipality is one of the 25 regions of the Autonomous Republic of Crimea, a territory recognized by a majority of countries as part of Ukraine and incorporated by Russia as the Republic of Crimea. The region is located on the western coast of Crimea on the Black Sea's shore. Its administrative center is the city of Yevpatoria. Population: 119,258 .

Mykolaivka is a city of district significance and administrative centre of Mykolaivka City United Territorial Community in Sloviansk Raion, Donetsk Oblast (province) of Ukraine to the south of the railway station Elektrychna. Population: 14,564 (2020 est.) .

The Saky City Municipality is one of the 25 regions of the Crimean Peninsula, currently subject to a territorial dispute between the Russian Federation and Ukraine. The region is located on the western coast of Crimea on the Black Sea's shore. Its administrative centre is the city of Saky. In 2014, the population stood at 25,146. 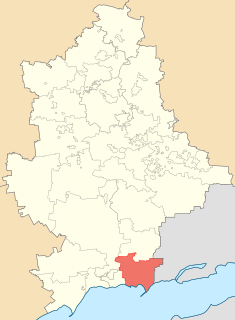 Novoazovsk Raion is one of the 18 administrative raions of Donetsk Oblast in eastern Ukraine. Its administrative center is located in the city of Novoazovsk, and its southern portion borders the Azov Sea. Population: 26,952 (2020 est.) 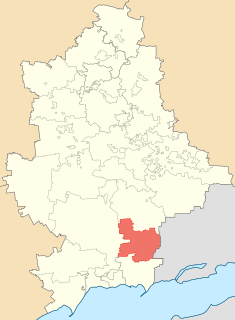 Telmanove Raion is one of the 18 administrative raions of Donetsk Oblast, located in southeastern Ukraine. The administrative center of the district is located in the urban-type settlement of Telmanove. Population: 13,773 (2020 est.) , 13,550 (2013 est.) The raion was named after the German Communist leader Ernst Thälmann.

Kakhovka Raion is one of the 18 administrative raions of Kherson Oblast in southern Ukraine. Its administrative center is located in the city of Kakhovka, which is incorporated as a city of oblast significance. Population: 34,521 (2020 est.)

A rural council or officially, village council, often shortened to is a local government area as well as one of the lowest forms of administrative division of Ukraine that is associated with rural populated places in Ukraine. These populated places can refer to either villages or [rural] settlements.

The Zaporizhzhia Municipality is a local government area that governs Zaporizhzhia, a city of regional significance located in southern Ukraine. Its population was 810,620 in the 2001 Ukrainian Census. 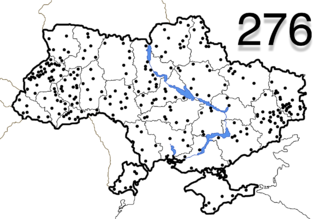