Claire Lacombe (4 August 1765-?) was a French actress and revolutionary. She is best known for her contributions during the French Revolution. Though it was only for a few years, Lacombe was a revolutionary and a founding member of the Society of Revolutionary Republican Women.

Lacombe was born in the provincial town of Pamiers in southwestern France. She became an actress at a young age and appeared in theatrical productions in the provinces before arriving in Paris in 1792. [1] She was not an outstanding success in the theater, and she was not entirely happy with her life. The acting company that Lacombe worked for moved from town to town and sometimes went to castles and the country houses of aristocrats. This probably had an influence in her decision to quit the company to become a revolutionary.

In Paris during the insurrection of 10 August 1792, Lacombe fought with the rebels during the storming of the Tuileries. She was shot through the arm but kept fighting on, earning herself the lifelong sobriquet, "Heroine of August Tenth". For her bravery, she was awarded a civic crown by the victorious fédérés. [2]

Lacombe became a frequent attendee at meetings of the Cordeliers Club through which she became involved with the most radical elements of the Revolution. In February, 1793, Lacombe and another female revolutionary, Pauline Léon, founded the Society of Revolutionary Republican Women. [3] [4] [5] Composed chiefly of working-class women, the Society associated with the most militant sans-culottes and enragés . [3] They functioned partly as a fighting force among the market women of Paris, and employed violent tactics to root out anti-revolutionaries. [6]

Despite the deeply entrenched chauvinism of the time, Lacombe met a few revolutionary men who fought for women's rights. One of these was Théophile Leclerc, with whom she lived for a while, until he left her to marry Pauline Léon. [7]

Under the Reign of Terror, the enragés were suppressed along with most other extremist groups, including the Society of Revolutionary Republican Women. On September 16, 1793, Lacombe, then president of the Society, was publicly denounced by the Jacobins to the Committee of General Security. The Jacobins accused her of "making counterrevolutionary statements" and having associated and aided a "notorious counterrevolutionary, the énrage Leclerc". [8]

Lacombe did her best to defend herself, but it was too late. She was briefly detained and then set free. The seed of distrust had been planted. The Society tried in vain to continue to petition the Convention. Most of the issues that they now dealt with were more trivial and less radical than their previous campaigns. The group had ostensibly been so notorious that the National Convention specifically banned women's organizations on 30 October 1793. [6] However, Chaumette's subsequent comments about men's right to have women care for the family, and how domestic duties were the only civic duties women had, reveals other reasons for the ban taking place. [9]

Barred from any political activity, Lacombe considered returning to her acting career. In April 1794, she was arrested as she prepared to leave for a theater in Dunkirk. [7] Lacombe was finally released from prison on 20 August 1795 (by order of 18 August 1795 signed by the Committee of General Security). [10] She went back to the theater but quit again after three months, and settled into a life of unrecorded obscurity. [7]

The French Revolution began in May 1789 when the Ancien Régime was abolished in favour of a constitutional monarchy. Its replacement in September 1792 by the First French Republic led to the execution of Louis XVI in January 1793, and an extended period of political turmoil. This culminated in the appointment of Napoleon as First Consul in November 1799, which is generally taken as its end point. Many of its principles are now considered fundamental aspects of modern Liberal democracy. 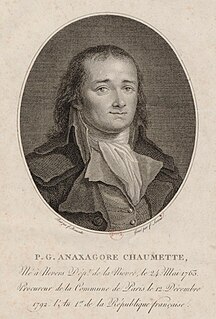 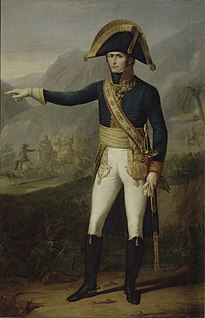 Charles Victoire Emmanuel Leclerc was a French Army general who served under Napoleon Bonaparte during the French Revolution. He was husband to Pauline Bonaparte, sister to Napoleon. In 1801, he was sent to Saint-Domingue (Haiti), where an expeditionary force under his command captured and deported the Haitian leader Toussaint L'Ouverture, as part of an unsuccessful attempt to reassert imperial control over the Saint-Domingue government. Leclerc died of yellow fever during the failed expedition. 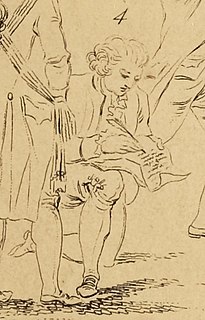 Jacques Roux was a radical Roman Catholic priest who took an active role in politics during the French Revolution. He skillfully expounded the ideals of popular democracy and classless society to crowds of Parisian sans-culottes, working class wage earners and shopkeepers, radicalizing them into a revolutionary force. He became a leader of a popular far-left.

The Enragés were a small number of firebrands known for defending the lower class and expressing the demands of the radical sans-culottes during the French Revolution. They played an active role in the 31 May 31 – 2 June 1793 Paris uprisings that forced the expulsion of the Girondins from the National Convention, allowing the Montagnards to assume full control. The Enragés became associated with this term for their angry rhetoric appealing to the National Convention to take more measures that would benefit the poor. Jacques Roux, Jean-François Varlet, Jean Théophile Victor Leclerc and Claire Lacombe, the primary leaders of the Enragés, were strident critics of the National Convention for failing to carry out the promises of the French Revolution. 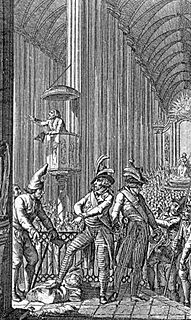 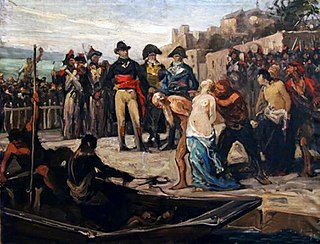 Republican marriage was a method of execution that allegedly occurred in Nantes during the Reign of Terror in Revolutionary France and "involved tying a naked man and woman together and drowning them". This was reported to have been practised during the drownings at Nantes (noyades) that were ordered by local Jacobin representative-on-mission Jean-Baptiste Carrier between November 1793 and January 1794 in the city of Nantes. Most accounts indicate that the victims were drowned in the Loire River, although a few sources describe an alternative means of execution in which the bound couple is run through with a sword, either before, or instead of drowning.

The French theatre of the late 18th century functioned as a forum for political expression and debate; during this period, society and art became highly politicised. The French took great national pride in their theatres. A report commissioned by the Commune of Paris in 1789 declared Paris to be a centre for the "foremost theatres of Europe" that served as an "exemplar for foreigners." An audience's response to the play was important to its success—if a play was received poorly (claques), rather than favourably (cabales), the play would not receive royalty payments.

Pauline Léon was a French woman born in Paris at the beginning of the French Revolution. She had a fiery spirit and held strong feminist and anti-royalist beliefs.

In pre-revolutionary France, women had no part in affairs outside the house. Before the revolution and the advent of feminism in France, women's roles in society consisted of providing heirs for their husbands and tending to household duties. Even in the upper classes, women were dismissed as simpletons, unable to understand or give a meaningful contribution to the philosophical or political conversations of the day. However, with the emergence of ideas such as liberté, égalité, and fraternité, the women of France joined their voices to the chaos of the early revolution. This was the beginning of feminism in France. With demonstrations such as the Women's March on Versailles, and the Demonstration of 20 June 1792, women displayed their commitment to the Revolution. Both the Declaration of the Rights of Woman and of the Female Citizen and the creation of the Society of Revolutionary Republican Women further conveyed their message of women's rights as a necessity to the new order of the revolution.

The Society of Revolutionary and Republican Women was the most famous female-led revolutionary organization during the French Revolution. Formed May 10, 1793, it lasted less than five months. In this brief period of time, however, the Society managed to draw significant interest within the national political scene, and advocated for gender equality in revolutionary politics.

The Fraternal Society of Patriots of Both Sexes, Defenders of the Constitution was a French revolutionary organization notable in the history of feminism as an early example of active participation of women in politics. 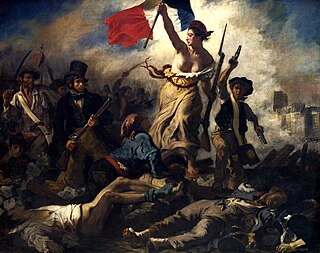 Historians since the late 20th century have debated how women not shared in the French Revolution and what short-term impact it had on French women. Women had no political rights in pre-Revolutionary France; they were considered "passive" citizens, forced to rely on men to determine what was best for them. That changed dramatically in theory as there seemingly were great advances in feminism. Feminism emerged in Paris as part of a broad demand for social and political reform. The women demanded equality to men and then moved on to a demand for the end of male domination. Their chief vehicle for agitation were pamphlets and women's clubs, especially the Society of Revolutionary Republican Women. However, the Jacobin element in power abolished all the women's clubs in October 1793 and arrested their leaders. The movement was crushed. Devance explains the decision in terms of the emphasis on masculinity in wartime, Marie Antoinette's bad reputation for feminine interference in state affairs, and traditional male supremacy. A decade later the Napoleonic Code confirmed and perpetuated women's second-class status. 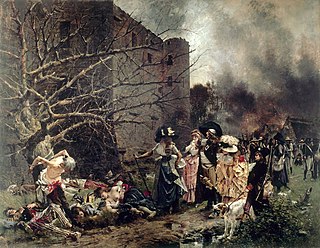 The Machecoul massacre is one of the first events of the War in the Vendée, a revolt against mass conscription and the civil constitution of the clergy. The first massacre took place on 11 March 1793, in the provincial city of Machecoul, in the district of the lower Loire. The city was a thriving center of grain trade; most of the victims were administrators, merchants and citizens of the city.