Clara Sophie Tybjerg née Sarauw (1864–1941) was a Danish women's rights activist, pacifist and educator. In 1915, she attended the International Women's Conference in The Hague, together with Thora Daugaard. Thereafter she helped establish and, from 1916 to 1920, headed the Danske Kvinders Fredskæde or Danish Women's Peace Chain which became the Danish branch of the Women's International League for Peace and Freedom. She is also remembered for helping to bring hunger-stricken children from Vienna to Denmark after the First World War. [1] [2]

Born on 3 March 1864 in Kalvehave Parish near Vordingborg, Clara Sophie Sarauw was the daughter of the forester Conrad August Nicolaus Sarauw (1816–1886) og Betzy Wilhelmine Hansen (1834–1909). After her father died she moved to Copenhagen where she worked as a teacher at Den Kellerske Åndssvageanstalt which specialized in educating handicapped children. She then went to the United States where she worked and continued her studies at the Pennsylvania Training School for Feebleminded Children until 1892. [1]

On 18 May 1893, she married the high court judge Erland Tybjerg (1863–1925). The following year, she was employed as an English teacher at H. Adlers Fællesskole, the first mixed school in Denmark, where she remained until 1915. Even after she left, she continued to be interested in education, especially in connection with handicapped children. [1]

Participation in the Danish women's movement

Tybjerg was an active participant in the Danish women's movement. In 1913, she became the international secretary for Danske Kvinders Nationalråd (The Women's Council in Denmark) and was also a member of Kvindelig Læseforening (Women Readers' Association). Until Danish women finally succeeded in achieving universal suffrage in 1915, she and her sister Elna Munch fought for the cause. [1]

Career as a peace activist

In 1915, she attended the International Women's Peace Conference in the Hague. On returning to Denmark, together with Thora Daugaard, she founded Danske Kvinders Fredskæde (DKF), the Danish arm of the Women's International League for Peace and Freedom. Tybjerg was responsible for setting up a study network consisting of 30 women, including Gyrithe Lemche, Henni Forchhammer, Estrid Hein, Matilde Bajer and Ellen Hørup. They travelled throughout Denmark encouraging women to become members of the DKF by paying one "peace crown" (fredskrone) and signing a list calling for "Justice rather than Might". Tybjerg chaired the organization from 1915 to 1920, increasing membership to around 10,000. After local branches were established throughout Denmark, she chaired the Copenhagen branch from 1921 to 1925. Thora Daugaard succeeded her as chair of the DKF. [1]

After the hostilities of the First World War finally subsided, the WILPF organized a second conference in Zurich. Tybjerg, representing the Danish branch, called for special attention to be given to the needs of children and young people. From about 1921, she actively strove to provide support for children in Vienna who were suffering from malnutrition. She succeeded in have many of them brought to Denmark where they could be restored to health in Danish homes. [2]

Tybjerg was married and had two children. After losing her husband in 1925, she spent a few years in Hillerød where she continued to participate in peace initiatives. She died in Copenhagen on 14 January 1941. [1] [2] She is buried in Tibirke Cemetery near Tisvilde. [3] 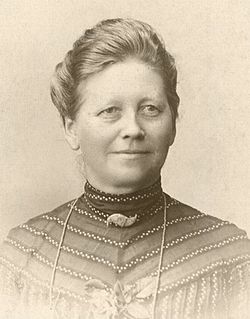 Elna Munch née Sarauw was a Danish feminist and politician,. She was the co-founder of the Landsforbundet for Kvinders Valgret or LKV (1907), the more radical of the two main Danish suffrage movements, and alongside Johanne Rambusch its leading member.

The modern-day character and the historical status of women in Denmark has been influenced by their own involvement in women's movements and political participation in the history of Denmark. Their mark can be seen in the fields of politics, women's suffrage, and literature, among others.

Women at the Hague was an International Congress of Women conference held at The Hague, Netherlands in April 1915. It had over 1,100 delegates and it established an International Committee of Women for Permanent Peace (ICWPP) with Jane Addams as president. It led to the creation of the Women's International League for Peace and Freedom (WILPF).

Helga Charlotte Norrie, née Harbou, was a Danish nurse, women's rights activist and educator. She was a major contributor to the development of nursing as an acceptable profession for women and also campaigned for women's rights, especially voting rights.

Thyra Beate Christiane Manicus-Hansen (1872–1954) was a Danish ceramist and trade unionist. As head of the Keramisk Malerforening, she successfully pressed for better pay and working conditions for those working as artists in Den Kongelige Porcelainsfabrik and Bing & Grøndahl porcelain factories. She also campaigned internationally for women's rights. 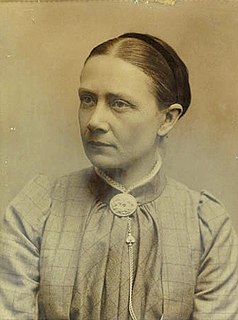 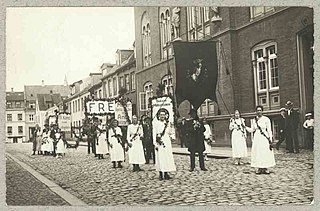 Danske Kvinders Fredskæde is the original name of the Danish branch of the Women's International League for Peace and Freedom. It was founded in 1915 following the International Congress of Women held in The Hague. The organization was aimed at developing national branches of women calling for more active support for peace once the First World War was over. Early activists from Denmark included Thora Daugaard (1874–1851) and Clara Tybjerg (1864–1941).

Theodora (Thora) Frederikke Marie Daugaard was a Danish women's rights activist, pacifist, editor and translator. In 1915, she attended the International Women's Conference in The Hague, together with Clara Tybjerg. Thereafter she established and later headed the Danske Kvinders Fredskæde or Danish Women's Peace Chain which became the Danish branch of the Women's International League for Peace and Freedom. She is also remembered for organizing assistance for Jews and their children in Nazi-occupied Denmark during the Second World War.

Benny Sophie Caroline Andrea Cederfeld de Simonsen née Treschow (1865–1952) was a Danish peace activist. She is remembered as an effective member of Danske Kvinders Fredskæde, the Danish branch of the Women's International League for Peace and Freedom (WILPF), later known as Kvindernes Internationale Liga for Fred og Frihed (KILFF). From 1931 to 1939, she was the organization's vice-president. She was an active participant at the international WILPF conferences from 1926 to 1937 as well as a member of their international committee where she dealt with the rights of minorities. 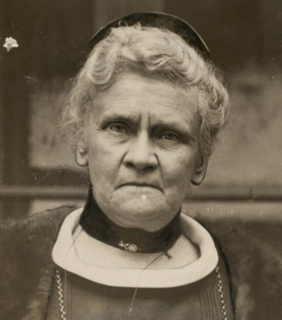 Louise Gustave Dorothea Hildegard Wright née Bauditz (1861–1935) was a Danish philanthropist, feminist and peace activist. From 1913, she headed the philanthropic Præmieselskabet for Plejemødre, an association for foster mothers which supervised over 600 foster children. She was also an active member of Danske Kvinders Nationalråd where she served as vice-president. In 1915, she was one of the founding members of the Danske Kvinders Fredskæde, the Danish chapter of the Women's International League for Peace and Freedom, serving as a board member (1921–1924).

Estrid Hein was a Danish ophthalmologist, women's rights activist and pacifist. She practised in Copenhagen from 1898, opening her own clinic in 1906. She was also a prominent figure in the women's movement, chairing the Copenhagen chapter of the Danish Women's Society from 1909, later serving on the society's central board. In 1915, she became an active member of Danske Kvinders Fredskæde (DKF), the Danish arm of the Women's International League for Peace and Freedom. The same year she joined the Scandinavian Family Law Commission where she was effective in furthering progress on women rights as spouses. From 1933 she participated on the executive board of Denmark's Women's Council.

Henriette Dorthea Beenfeldt née Hansen (1878–1949) was a Danish peace activist and feminist who became one of the principal members of the Dansk Fredsforening (DF). After experiencing difficulties with board members of DF, she became an enthusiastic member of Kvindernes Internationale Liga for Fred og Frihed (KILFF), the Danish chapter of the Women's International League for Peace and Freedom, serving on the board of the Copenhagen branch. She continued to act as a radical pacifist, strongly opposing re-armament, even after Denmark joined NATO in 1949.

Johanne Elisabeth Münter née Johnson (1844–1921) was a Danish writer and women's rights activist. After travelling to Japan with her husband in 1895, she wrote several books on Japanese women and her own fascination with the country. In the 1890s, she became involved in the women's movement, speaking about culture and religion at the Kvindelig Læseforening. She also joined the Danske Kvinders Forsvarsforening and the women's department of the Red Cross. In 1904, she participated in the founding conference of the International Woman Suffrage Alliance (IWSA) in Berlin. In 1906, she founded and headed the women's suffrage organization Kvindevalgretsklubben which was a member of the Danske Kvindeforeningers Valgretsforbund. She was a delegate at the IWSA conferences in Amsterdam (1908) and London (1909). 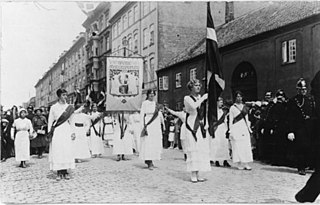 Ane Marie Johansen Egeberg (1865–1952) was a Danish schoolteacher and women's rights activist. Based in Vejle, she established the local branch of the Danish Women's Society which she headed for 16 years. On the political front, from 1924 she was a member of the municipal council representing the liberal party Venstre.

Anne Kirstine Bruun (1853–1934) was a Danish schoolteacher and women's rights activist. An early proponent of equal pay for male and female teachers, in 1900 she became the first woman to serve on the central committee of the Danish Union of Teachers. She was an enthusiastic member of the Danish Women's Society and a frequent contributor to their magazine Kvinden og Samfundet which she edited for a time in the mid-1890s. Bruun was an early supporter of the Women's Society's direct involvement in the fight for women's voting rights. 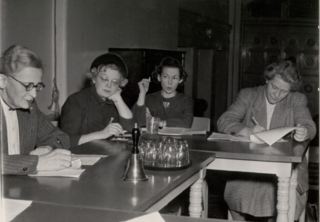 Anna Westergaard (1882–1964) was a Danish railway official and a highly influential women's rights activist. Working for the Danish State Railways where she later became a traffic supervisor, she became a board member of the Danish Railways Union (Jernbaneforeningen) and of the Danish Civil Servants Union. A strong proponent of equal rights for men and women in education and the labour market, she was a key contributor to management of the Danish Women's Society (1919–1924) and the Women's Council in Denmark (1938–1946). Westergaard represented Danish women's interests in discussions at the League of Nations in the mid-1930s. From 1937 to 1960, she was president of Open Door International for the Economic Emancipation of the Woman Worker. Politically, she belonged to the Danish Social Liberal Party and was an alternate in the Upper House or Landstinget from 1939 to 1953.

Thora Alvilda Knudsen (1861–1950) was a Danish nurse, women's rights activist and philanthropist. She became an active member of the Danish Nurses' Organization from its establishment in 1899 and, campaigning for women's suffrage, was elected to serve as a member of Copenhagen's Borgerrepræsentation in 1909 after women were permitted to participate in municipal elections. A frequent speaker at the meetings of the Danish Women's Society, she served on the board from 1911. As a philanthropist, she supported several relief organizations including the Diakonissestiftelsen and the Danish Red Cross.