Last updated September 03, 2021
Not to be confused with Clare Castle.
Village in Munster, Ireland

Clarecastle (An Clár or Irish : Droichead an Chláir, meaning 'Bridge of the Plateau') is a village just south of Ennis in County Clare, Ireland. From 2008 to 2016 the village saw a significant population increase due to its proximity to Ennis, Shannon, and Limerick.

The town is named after the Clare Castle, [1] which stands on an island in the narrowest navigable part of the River Fergus. The Irish Clár, meaning a wooden board, is often used for a bridge. The name probably originated as Clár adar da choradh, which means "the bridge between two weirs". Another explanation of the name is that the de Clare family gave the castle its name, since they had acquired land in Kilkenny and Thomond that included the castle. In 1590 County Clare was named after the castle, which is in a strategic location. [1]

Clarecastle (Clare Abbey) is a parish in the Roman Catholic Diocese of Killaloe. [2] It is also known as Ballyea/Clarecastle. Clare Abbey and Killone Abbey are linked by a footpath, the Pilgrim's Road. [3]

Clarecastle was once a port for boats, used to deliver items into the town of Ennis that could not navigate the river Fergus. The Quay of Clarecastle was a busy port during its time. [1] Today it is used for fishing and recreation.[ citation needed ]

The local GAA team is Clarecastle GAA. [4] The club's colours are black and white and they are known as the Magpies.

The composer Gerald Barry was born in Clarecastle in 1952. [5] 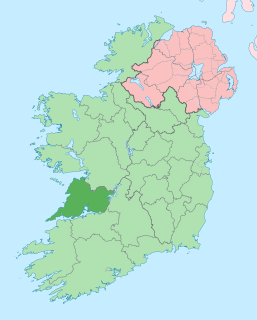 County Clare is a county in Ireland, in the Mid-West Region and the province of Munster, bordered on the west by the Atlantic Ocean. Clare County Council is the local authority. The county had a population of 118,817 at the 2016 census. The county town and largest settlement is Ennis. 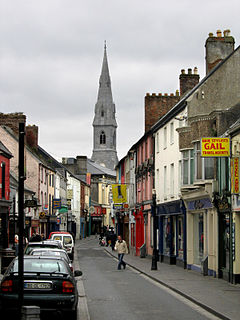 Killaloe is a large village in east County Clare, Ireland. The village lies on the River Shannon on the western bank of Lough Derg and is connected by Killaloe Bridge to the "twin town" of Ballina on the eastern bank of the lake. 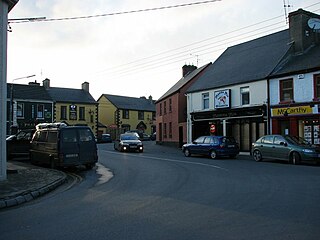 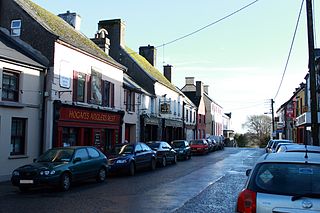 Corofin is a village on the River Fergus in northern County Clare in Ireland and a Catholic parish with the same name. 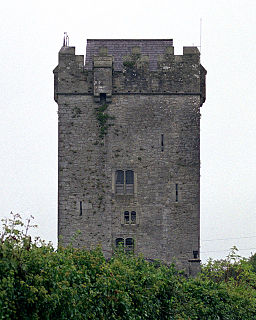 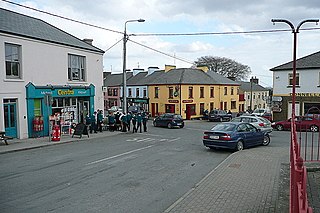 Kildysart, officially Killadysert, is a village in County Clare, Ireland and a civil and Roman Catholic parish by the same name that surrounds the village. 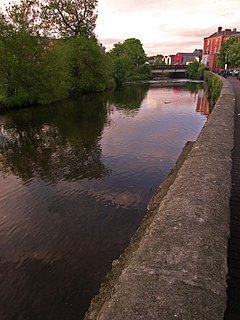 The River Fergus is a river within the Shannon River Basin which flows in County Clare, Ireland. The river begins at Lough Fergus in north Clare and flows into the Shannon Estuary. The source is at Lough Fergus in the townland of Kilmore North. At Knockroe, the river is joined by a tributary stream called the Clooneen River. The Fergus flows underground for about a kilometre in Cahermacon, near Kilnaboy. The river then flows through Lough Inchiquin. Just after this lake, a tributary which has its source at Loughnagowan joins the Fergus. The river then flows along by the village of Corofin. After Corofin, the river flows through Lough Atedaun, Ballyteige Lough, Dromore Lake and Ballyallia Lake. The river then flows through the town of Ennis, where it is crossed by six road bridges, a pedestrian bridge and a railway bridge. There is also a small branch which splits off just north of Ennis and rejoins the main flow to the east of the town. Another tributary, a stream known as the Inch River or Claureen River, also joins at Ennis. The river then flows through the village of Clarecastle, where there was a port in former times. After Clarecastle, the river widens into an estuary which then joins the Shannon Estuary. There are several islands in the Fergus Estuary, including Deer Island, Coney Island, Trummer Island, Inishmacowney, Canon Island and Inishloe. Some of these islands were once inhabited, and there were schools on Coney Island and Inishloe.

Ballynacally is a village and townland situated 16.7 km (10.4 mi) southwest of Ennis, on the R473 coast road to Kilrush in the civil parish of Kilchreest, County Clare, Ireland. It lies near the bank of the River Shannon. 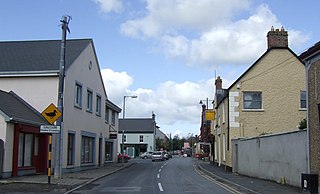 Sixmilebridge, colloquially The Bridge, is a small town in County Clare, Ireland. Located midway between Ennis and Limerick city, the town is a short distance away from the main N18 road, being located on the old "back road" between the two. The village of Kilmurry is also part of the Sixmilebridge parish. 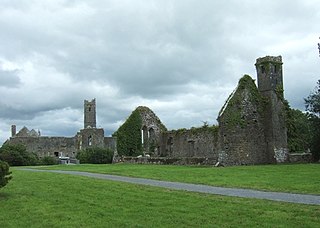 Quin is a village in southeast County Clare in Ireland and a Catholic parish and civil parish of the same name. The main attraction, Quin Abbey, is open to the public, and although mostly ruined, much of the structure remains. The abbey was built on the foundations of an earlier Norman castle, and the foundations of three corner towers can still be seen. The name of the village is a reference in ancient Irish to the original five roads out of the village. The village is located in a district sometimes known as Plassey. 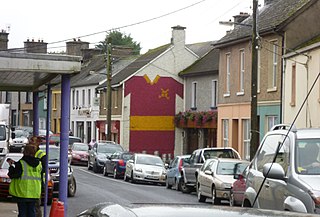 Tulla is a market town in County Clare, Ireland. It is situated in the east of the county, on the R462 and near its junction with the R352, 18km from Ennis. 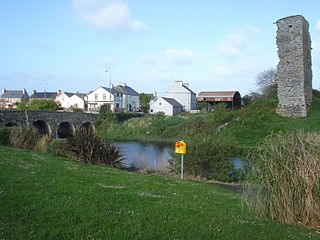 Doonbeg is a village in west County Clare, Ireland on the Atlantic coast. The surrounding natural environment has supported its development as a tourist resort. The area was officially classified as part of the West Clare Gaeltacht, an Irish-speaking community, until 1956.

Kilmaley is a village situated 12 kilometres (7.5 mi) west of the town of Ennis, County Clare, Ireland. The name "Kilmaley" came from the Irish language "Cill Mhaile" which translates to Church of (Saint) Maley.

Coolmeen, formerly called Kilfiddane, is a Roman Catholic parish in County Clare, Ireland. Kilfiddane is a civil parish that covers the same area. The parish is located on the Shannon Estuary to the south west of Kildysart. 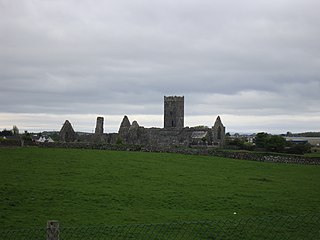 Clareabbey is a civil parish in County Clare, Ireland, named after the former Augustinian monastery of Clare Abbey. The main settlement in the town of Clarecastle. 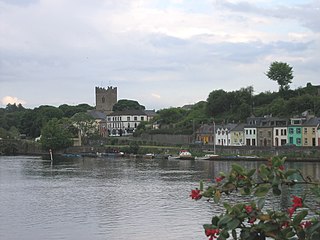 Killaloe is a civil parish in County Clare, Ireland. The main settlement is the town of Killaloe.

Templemaley is a civil parish in County Clare, Ireland. It contains the village of Barefield and part of the town of Ennis. 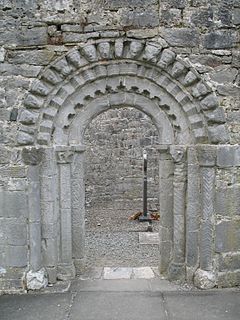 Dysart and Ruan is a Catholic parish in County Clare, Ireland. It covers the civil parishes of Ruan and Dysert, and includes the village of Ruan, which holds the parish office. The parish contains the ruins of the 12th century St. Tola's Church, part of Dysert O'Dea Monastery.