Clarence Victor Grimmett (25 December 1891 – 2 May 1980) was a New Zealand-born Australian cricketer. He is thought by many to be one of the finest early spin bowlers, and usually credited as the developer of the flipper.

Grimmett was born in Caversham, Dunedin, New Zealand, on Christmas Day 1891, leading Bill O'Reilly to say that he "must have been the best Christmas present Australia ever received from that country." [1]

A schoolmaster encouraged him to concentrate on spin bowling rather than fast bowling. He played club cricket in Wellington, and made his first-class debut for Wellington at the age of 17. At that time, New Zealand was not a Test cricketing nation, and in 1914 he moved to neighbouring Australia.

He played club cricket in Sydney for three years. In his first match in senior cricket, he took 12 wickets for 65 runs. [2] After marrying a Victorian, he moved to Melbourne, where he played first-class cricket for Victoria. He moved to South Australia in 1923, but it is for his performances in Test cricket for the Australian cricket team that he is best remembered.

Grimmett played 37 Tests between 1924 and 1936, taking 216 wickets at an average of just 24.21 runs apiece. He took two five wicket hauls on debut against England in Sydney in 1925. [3] He became the first bowler to reach the milestone of taking 200 Test wickets, and is one of only five Test bowlers that played in their first Test after the age of thirty to take more than 100 wickets, the other three being Dilip Doshi, Saeed Ajmal, Ryan Harris and Mohammed Rafique. [4] He took an average of six wickets per match. Many wickets in the last four years of his Test career were taken bowling in tandem with fellow leg-spinner Bill O'Reilly. Grimmett remains the one of the few bowlers with career figures of over 200 wickets in fewer than 40 Tests. He held the record for the fastest bowler to take 200 wickets in Tests, doing so in his 36th match. [5] The record stood for 82 years, until Yasir Shah of Pakistan broke that mark in December 2018. [6]

He took a five-wicket haul on 21 occasions, seven times finishing with ten wickets or more in a match. His Test career only began when he was aged 33, and ended when he was 44, playing his last Test against South Africa in Durban. Despite taking 44 wickets in the series, and continued success in first-class cricket, he was dropped for the 1936/7 series at home against England, replaced by Frank Ward, and did not join the 1938 tour to England.

His first-class records holds a total of 1,424 wickets in 248 matches between 1911 and 1941, again at a rate close to six wickets per match. This total included 5 wicket bags on over 120 occasions and – in one performance for a touring Australian side against Yorkshire in 1930, he took 10 wickets for 37 runs off 22.3 overs, one of only a very small number of players to have claimed all of the wickets in an innings. He took 513 wickets in his 79 Sheffield Shield matches. 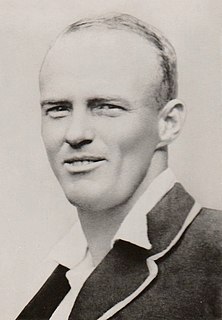 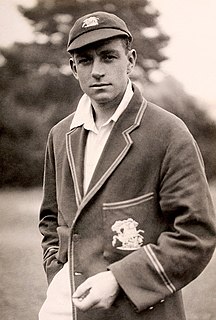 Leslie O'Brien "Chuck" Fleetwood-Smith was a cricketer who played for Victoria and Australia. Known universally as "Chuck", he was the "wayward genius" of Australian cricket during the 1930s. A slow bowler who could spin the ball harder and further than his contemporaries, Fleetwood-Smith was regarded as a rare talent, but his cricket suffered from a lack of self-discipline that also characterised his personal life. In addition, his career coincided with those of Bill O'Reilly and Clarrie Grimmett, two spinners named in the ten inaugural members of the Australian Cricket Hall of Fame; as a result he played only ten Test matches but left a lasting impression with one delivery in particular. His dismissal of Wally Hammond in the fourth Test of the 1936–37 Ashes series has been compared to Shane Warne's ball of the century. He has the unwanted record of conceding the most runs by a bowler in a Test match innings. 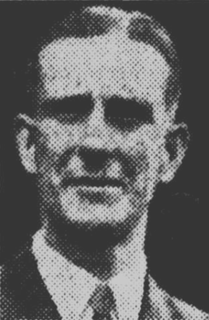 Morris William Sievers was an Australian cricketer who played in three Tests in 1936–37.

1930 was the 37th season of County Championship cricket in England and will always be remembered for the remarkable batting performances of Australia's Don Bradman. Australia won the Test series 2–1. Lancashire regained the championship to complete four titles in five seasons. 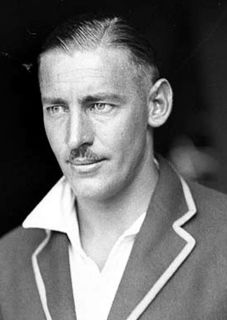 Philip Keith Lee was an Australian cricketer who played in two Test matches from 1931 to 1933.

Ravichandran Ashwinpronunciation (help·info) is an Indian international cricketer. An all-rounder who bats right-handed and bowls right-arm off break, Ashwin plays for Tamil Nadu in domestic cricket and Delhi Capitals in the Indian Premier League. He is the fastest Indian bowler to reach the 50, 100, 150, 200, 250, 300 and 350-wicket mark in Test cricket in terms of number of innings. In 2016, he became the third Indian to win the ICC Cricketer of the Year award. He is currently the highest ranked spinner in test cricket, and the highest ranked test bowler for India according to the ICC Test Player Rankings at No.8.

Yasir Shah is an international cricketer from Pakistan. He plays as a bowler, and is the joint-second fastest bowler in the history of Test cricket to take 100 wickets, as well as also being the fastest to pick up 200 wickets, having broken the previous record set by Australian bowler Clarrie Grimmett.

The New Zealand cricket team toured the United Arab Emirates between October and December 2018 to play three Tests, three One Day Internationals (ODIs) and three Twenty20 International (T20Is) matches against Pakistan. Originally, the tour was scheduled to have three Tests, five ODIs and one T20I match.