ClassicaLoid (クラシカロイド, Kurashikaroido) is a 2016 Japanese comedy anime television series produced by Sunrise and NHK. The series premiered on October 8, 2016 on NHK E. A second season started airing in October 7, 2017.

Two high school students, Kanae Otowa and Sōsuke Kagura, live in a rural town that is attempting to reinvigorate their town with music. Otowa and Kagura notice one day that abnormal versions of Beethoven and Mozart have appeared, known as "ClassicaLoids". The two ClassicaLoids play music they refer to as "Musik", which Otowa and Kagura soon discover is a power that causes stars to fall and giant robots to appear, turning every day henceforth bewildered. Subsequently, ClassicaLoid versions of Chopin, Bach, Schubert and other renowned composers also start to appear. The power that the ClassicaLoids hold and their origin remains a mystery that is yet to be discovered.

The anime began airing on October 8, 2016 on NHK E. [7] In North America, Sentai Filmworks acquired the license for the anime series, and is simulcasting the series on Hulu, Anime Network and Crunchyroll. [8] [9] In Australia and New Zealand, the series is simulcast on AnimeLab. [10] A second season began airing on October 7, 2017. [11] The second season simulcasted in North America and other regions on Hidive. [12]

The series was announced in July 2015 as a collaboration between Sunrise and NHK. It is animated by Sunrise, directed by Yoichi Fujita and written by Miya Asakawa, Tsuyoshi Kida, Kyo Kogure, and Shū Matsubara, with Ichirō Sakaki and Michihiro Tsuchiya handling series composition. It features original character designs by Makoto Tsuchibayashi, adapted character designs by Seiichi Hashimoto, music by Masashi Hamauzu, and musical renditions by Daisuke Asakura, Tomoyasu Hotei, tofubeats and Tsunku for Liszt, Beethoven, Mozart and Bach, respectively. [13] NHK and BN Pictures are the series' producers. [1] [14]

Crunchyroll, Inc. is an American distributor, publisher, production and licensing company focused on streaming anime, manga, and dorama. Founded in 2006 by a group of University of California, Berkeley graduates, Crunchyroll's distribution channel and partnership program delivers content to 70 million registered users worldwide. Crunchyroll is a subsidiary of Otter Media, which is a subsidiary of AT&T's WarnerMedia. Sony announced in December 2020 that its subsidiary Funimation will acquire Crunchyroll from AT&T for approximately US$1.175 billion . Crunchyroll has offices in San Francisco, Los Angeles, London, Barcelona, Vancouver, Chișinău and Tokyo, and is a member of the Association of Japanese Animations (AJA). "Crunchyroll-Hime", also known as "Hime" is the official mascot of Crunchyroll.

Teekyu is a sports comedy manga series serialized in Earth Star Entertainment's Comic Earth Star from February 2012 to January 2018. Its name is a pun on the Japanese word for tennis, teikyū (庭球). The manga has been adapted into an anime television series, which ran from 2012 to 2017.

Gintama: The Movie: The Final Chapter: Be Forever Yorozuya is a 2013 Japanese animated film produced by Sunrise based on the Gintama manga and anime series. It was directed by the director from the anime series Yoichi Fujita and based on a story by Hideaki Sorachi, Gin Tama's original author. It stars Tomokazu Sugita, Daisuke Sakaguchi, Rie Kugimiya among others. The film focuses on the freelancer samurai Gintoki Sakata in a time travelling story where he encounters older personas of the people he met in Edo.

Free! is a Japanese anime television series produced by Kyoto Animation and Animation Do. The first two seasons are loosely based on the light novel, High Speed!, written by Kōji Ōji, which received an honorable mention in the second Kyoto Animation Award contest in 2011 and was published in July 2013. The first season titled, Free! - Iwatobi Swim Club for international distribution, aired in Japan in 2013; and the second season titled, Free! - Eternal Summer, aired in 2014. A third season of the anime series titled, Free! - Dive to the Future, aired in 2018. Hiroko Utsumi directed the first two seasons, while season three was directed by Eisaku Kawanami.

Merman in My Tub is a Japanese four-panel manga series written and illustrated by Itokichi. It has been serialized in Media Factory's Monthly Comic Gene magazine since 2011 and the chapters have collected into eight tankōbon volumes. An anime television series adaptation by Asahi Production aired from October to December 2014.

Makura no Danshi, also known as Makuranodanshi, is a Japanese anime television series produced by Assez Finaud Fabric and Feel. It aired in Japan on 13 July 2015 and finished on 28 September 2015.

Aya Endō is a Japanese voice actress and narrator from Yamagata Prefecture. At the 2nd Seiyu Awards, she won Best Singing along with her cast mates in Lucky Star, and at the 3rd Seiyu Awards, she won Best Supporting Actress. She is the current official Japanese dub voice of Minnie Mouse since 2016 replacing the late Yūko Mizutani, and is also the voice for the character Iris in Rockman X DiVE starting July 2020, which was previously released without any voice data. 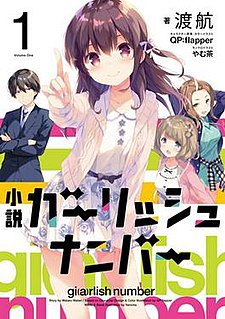 Girlish Number is a Japanese multimedia project. It launched in the March 2016 issue of ASCII Media Works' Dengeki G's Magazine as a serial novel written by Wataru Watari, with illustrations by QP:flapper and Yamcha. A manga series drawn by Yūki Dōmoto is serialized in Dengeki G's Comic, and a 12-episode anime television series by Diomedéa aired from October to December 2016. 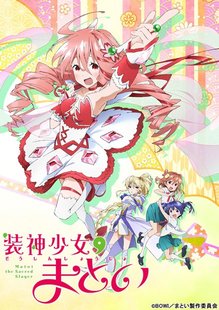 Matoi the Sacred Slayer is a Japanese magical girl anime television series produced by White Fox. It was announced in July 2016 as White Fox's first original anime series that aired between October 4 and December 27, 2016.

Gintama (銀魂) is a Japanese jidaigeki action comedy film written and directed by Yūichi Fukuda, starring Shun Oguri and based on the manga and anime series of the same name written and illustrated by Hideaki Sorachi. It was released on July 14, 2017 in Japan by Warner Bros. Pictures.

Nyanbo! (にゃんぼー！) is a Japanese anime television series by Shirogumi. It is a spin-off of Kiyohiko Azuma's Yotsuba&! manga, based on the cat versions of the Danbo characters within the series. It began airing on September 27, 2016, on NHK-E.

Atom: The Beginning is a Japanese manga series written and illustrated by Tetsuro Kasahara, with writing contributions by Makoto Tezuka and Masami Yuki. The series is a prequel to Osamu Tezuka's Astro Boy manga series, depicting the events up until the birth of Astro Boy. It began serialization in Hero's Inc.'s Monthly Hero's magazine on December 1, 2014, and has been compiled into ten tankōbon volumes as of July 2019. An anime television series adaptation aired from April 15 to July 8, 2017. 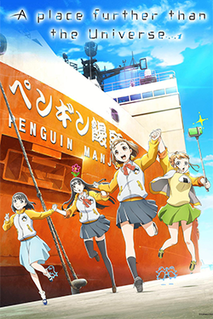 A Place Further than the Universe is an anime television series produced by Madhouse. The series is directed by Atsuko Ishizuka, written by Jukki Hanada and features character designs by Takahiro Yoshimatsu. It aired in Japan between January and March 2018 and was co-produced and distributed internationally by Crunchyroll.

Anima Yell! is a Japanese four-panel manga series by Tsukasa Unohana. It was serialized in Houbunsha's seinen manga magazine Manga Time Kirara Carat from its April 2016 to October 2020 issues and has been collected in four tankōbon volumes. An anime television series adaptation by Doga Kobo aired from October 7 to December 23, 2018.

Tsukumogami Kashimasu is a Japanese novel written by Megumi Hatakenaka and published in 2007. A sequel, titled Tsukumogami, Asobō yo, was published in 2013. An anime television series adaptation premiered from July to October 2018. Crunchyroll is streaming the series under the title We Rent Tsukumogami.

Radiant is a French comics series written and illustrated by Tony Valente. It has been published by Ankama since 2013 and currently has 13 volumes released in French. It was later published by the Japanese publisher Asukashinsha in 2015, making it the first French manfra to be published in Japan. The series has been licensed by Viz Media in English since 2018 and currently has the first 9 volumes released. It is also available in other languages such as German, Italian, Spanish and Portuguese by Panini Comics. The series received an anime adaptation by Lerche that aired from October 6, 2018 to February 23, 2019. The anime was renewed for a second season, which premiered on October 2, 2019.