Clonegal, officially Clonegall ( /ˈkloʊnəɡɔːl/ KLOH-nə-gawl; from Irish : Cluain na nGall, meaning "meadow of the foreigners"), [2] is a village in the southeast of County Carlow, Ireland. It is in a rural setting, 5 km from Bunclody, County Wexford, 22 km from Carlow and 17 km from the proposed interchange of the N9 and N80 roads at Rathcrogue. It is just over a mile north of where the River Slaney and the River Derry meet. [3] Clonegal has a much smaller "twin" village across the River Derry in County Wexford, Watch House Village.

The town is served by a primary school, and is the center of an agricultural hinterland. [3]

The name Clonegal comes from the Irish Cluain na nGall or "Meadow of the Foreigner". This could have originated from when Cromwell’s soldiers, during the Irish Confederate Wars, fought the Irish in the village in 1650 after which all Irish surviving males were massacred. Others contend that it came from foreign students who came to study in a monastery near the village. [3] Clonegal won the tidiest village in Ireland award in 2014 and again in 2015.[ citation needed ]

There were once eleven malt houses in and around the village, along with a wool and corn store, a police station and other shops. [3] 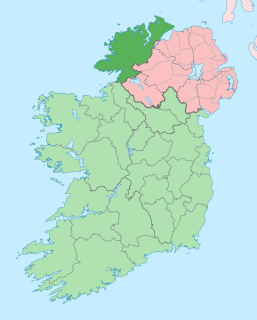 County Donegal is a county of Ireland in the province of Ulster. It is named after the town of Donegal in the south of the county. Donegal County Council is the local council and Lifford the county town.

Donegal or Donegal Town is a town in County Donegal in Ulster, Ireland. The name was historically written in English as Dunnagall or Dunagall. Although Donegal gave its name to the county, now Lifford is the county town. From the 1470s until the very early 17th century, Donegal was the 'capital' of Tyrconnell, a Gaelic kingdom controlled by the O'Donnell dynasty of the Northern Uí Néill. 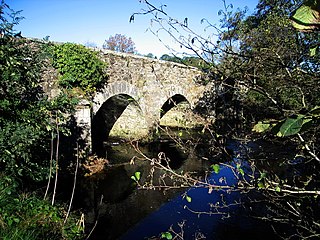 The River Slaney is a large river in the southeast of Ireland. It rises on Lugnaquilla Mountain in the western Wicklow Mountains and flows west and then south through counties Wicklow, Carlow and Wexford for 117.5 km (73 mi), before entering St George's Channel in the Irish Sea at Wexford town. The estuary of the Slaney is wide and shallow and is known as Wexford Harbour. The catchment area of the River Slaney is 1,762 km2. The long term average flow rate of the River Slaney is 37.4 Cubic Metres per second (m3/s)

Borris is a small town on the River Barrow, in County Carlow, Ireland. It lies on the R702 regional road. 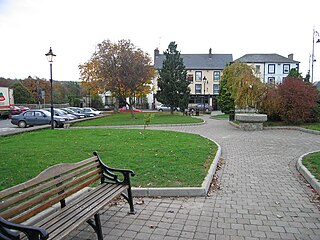 Bunclody, formerly Newtownbarry, is a small town on the River Slaney in Wexford, Ireland. It is located near the foot of Mount Leinster. Most of the town is in County Wexford; a small area at the north end of town is in County Carlow. Bunclody has received a number of high scores in the Tidy Towns competition. The town is known for the "Streams of Bunclody Festival" held during the month of July. Bunclody was an All-Ireland Pride of Place Winner in 2018. A volunteer led tourist office is open in the town.

Eglinton is a village in County Londonderry, Northern Ireland. It lies 5.5 miles (8.9 km) east-north-east of Derry, to which it serves as a sleeper village, and 9.5 miles (15.3 km) west-south-west of Limavady. Eglinton had a population of 3,679 people in the 2011 Census, an increase of 16% on the 2001 Census population of 3,165. It lies within Derry and Strabane district. The City of Derry Airport, also known as Eglinton Aerodrome and formerly as Londonderry Eglinton Airport, lies a short distance from the village.

Clonaslee is a village in north County Laois, Ireland, situated in the foothills of the Slieve Bloom Mountains on the R422 Mountmellick to Birr road. Clonaslee is approximately 100 km west of Dublin, and is close to the towns of Portlaoise and Tullamore.

Clonoulty is a small village and a civil parish in County Tipperary, Ireland. It is one of nine civil parishes in the barony of Kilnamanagh Lower. It is also one half of the ecclesiastical parish of Clonoulty-Rossmore in the Roman Catholic Archdiocese of Cashel and Emly. Clonoulty may also refer to a slightly larger area which forms one half of the Clonoulty-Rossmore GAA club.

Clonbulloge is a village in County Offaly, Ireland. The name appears to mean "bumpy meadow.". The common pronunciation of the village up to recent times was 'Clon Bolg', which endorses this interpretation. It has been voted the tidiest town in County Offaly every year since 1978.

Watch House Village is a small village in County Wexford, Ireland, on the River Derry. It is a twin village of the much larger Clonegal in County Carlow on the other side of the river, which forms the county boundary.

The River Derry is a large river in the southeast of Leinster, Ireland, a tributary of the Slaney. It rises just south of Hacketstown, County Carlow, Ireland. It flows southeast to Tinahely, being accompanied by the R747 regional road for the distance.

Rosbercon is a village in Ireland, on the opposite side of the River Barrow from New Ross, County Wexford. Although the village was originally in County Kilkenny, much of it is now in Wexford for administrative purposes. It had a population of 628 as of the 2006 census. 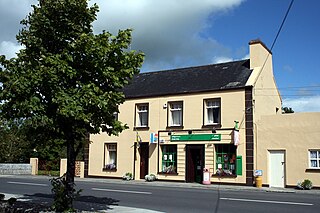 Cloonfad is a village in County Roscommon, Ireland, at the crossroads of the N83 National secondary road and the R327 regional road, about 10 km from the town of Ballyhaunis in Co. Mayo. A public walkway takes walkers to surrounding villages through scenic moorland. This habitat gave rise to the village's name in Irish - Cluain Fada or "Long Meadow". Cloonfad's local church, the Church of Saint Patrick, has been publishing an annual parish magazine since 1992 "The Cloonfad Magazine".

Clonmore is a village in County Carlow, Ireland. It is located 3½ miles south of Hacketstown and 9 miles east of Tullow in the north-east corner of County Carlow.

Newtownforbes is a village in County Longford, Ireland. It was historically called Lisbrack, an anglicisation of the Irish name. 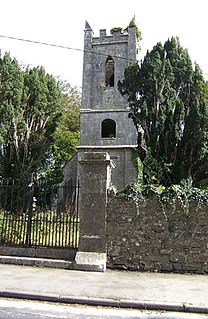 Kilmurry-Negaul is a civil parish and a village in County Clare, Ireland.

St. Mullin's Upper is a barony in County Carlow, Republic of Ireland.