Because d2 = 0, every exact form is necessarily closed. The question of whether every closed form is exact depends on the topology of the domain of interest. On a contractible domain, every closed form is exact by the Poincaré lemma. More general questions of this kind on an arbitrary differentiable manifold are the subject of de Rham cohomology, which allows one to obtain purely topological information using differential methods.

is not actually a function (see the next paragraph)

is not an exact form. Still,

has vanishing derivative and is therefore closed.

Note that the argument

is only defined up to an integer multiple of

since a single point

can be assigned different arguments

, etc. We can assign arguments in a locally consistent manner around

, but not in a globally consistent manner. This is because if we trace a loop from

counterclockwise around the origin and back to

, the argument increases by

over a counter-clockwise oriented loop

Even though the argument

is not technically a function, the different local definitions of

differ from one another by constants. Since the derivative at

only uses local data, and since functions that differ by a constant have the same derivative, the argument has a globally well-defined derivative "

The upshot is that

that is not actually the derivative of any well-defined function

is not exact. Explicitly,

which by inspection has derivative zero. Because

has vanishing derivative, we say that it is closed.

meaning that any closed form

is the sum of an exact form

and a multiple of

Differential forms in R2 and R3 were well known in the mathematical physics of the nineteenth century. In the plane, 0-forms are just functions, and 2-forms are functions times the basic area element dx ∧ dy, so that it is the 1-forms

that are of real interest. The formula for the exterior derivative d here is

where the subscripts denote partial derivatives. Therefore the condition for

to be closed is

In this case if h(x, y) is a function then

The implication from 'exact' to 'closed' is then a consequence of the symmetry of second derivatives, with respect to x and y.

The gradient theorem asserts that a 1-form is exact if and only if the line integral of the form depends only on the endpoints of the curve, or equivalently, if the integral around any smooth closed curve is zero.

Thinking of a vector field as a 2-form instead, a closed vector field is one whose derivative (divergence) vanishes, and is called an incompressible flow (sometimes solenoidal vector field). The term incompressible is used because a non-zero divergence corresponds to the presence of sources and sinks in analogy with a fluid.

The Poincaré lemma states that if B is an open ball in Rn, any smooth closed p-form ω defined on B is exact, for any integer p with 1 ≤ p ≤ n. [1]

By the fundamental theorem of calculus we have that

being the interior multiplication or contraction by the vector field X, Cartan's formula states that [2]

Using the fact that d commutes with LX,

leads to the identity

(In the language of homological algebra, g is a "contracting homotopy".)

The same method applies to any open set in Rn that is star-shaped about 0, i.e. any open set containing 0 and invariant under αt for

a p-form on V, define

Example: In two dimensions the Poincaré lemma can be proved directly for closed 1-forms and 2-forms as follows. [9]

When the difference of two closed forms is an exact form, they are said to be cohomologous to each other. That is, if ζ and η are closed forms, and one can find some β such that

Using contracting homotopies similar to the one used in the proof of the Poincaré lemma, it can be shown that de Rham cohomology is homotopy-invariant. [10]

In electrodynamics, the case of the magnetic field

produced by a stationary electrical current is important. There one deals with the vector potential

of this field. This case corresponds to k = 2, and the defining region is the full

. It corresponds to the current two-form

For the magnetic field

one has analogous results: it corresponds to the induction two-form

, and can be derived from the vector potential

corresponds to the potential one-form

, i.e., that there are no magnetic monopoles.

In a special gauge,

is a constant, the magnetic vacuum permeability.)

This equation is remarkable, because it corresponds completely to a well-known formula for the electrical field

, namely for the electrostatic Coulomb potential

of a charge density

. At this place one can already guess that

can be unified to quantities with six rsp. four nontrivial components, which is the basis of the relativistic invariance of the Maxwell equations.

If the condition of stationarity is left, on the left-hand side of the above-mentioned equation one must add, in the equations for

, to the three space coordinates, as a fourth variable also the time t, whereas on the right-hand side, in

, must be used, i.e. it is added to the argument of the current-density. Finally, as before, one integrates over the three primed space coordinates. (As usual c is the vacuum velocity of light.)

In physics and mechanics, torque is the rotational equivalent of linear force. It is also referred to as the moment, moment of force, rotational force or turning effect, depending on the field of study. The concept originated with the studies by Archimedes of the usage of levers. Just as a linear force is a push or a pull, a torque can be thought of as a twist to an object around a specific axis. Another definition of torque is the product of the magnitude of the force and the perpendicular distance of the line of action of a force from the axis of rotation. The symbol for torque is typically , the lowercase Greek letter tau. When being referred to as moment of force, it is commonly denoted by M.

In mathematics, the symmetry of second derivatives refers to the possibility under certain conditions of interchanging the order of taking partial derivatives of a function 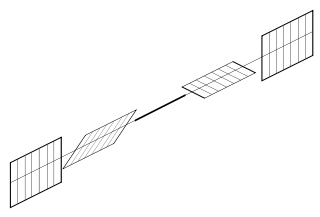 Zero sound is the name given by Lev Landau to the unique quantum vibrations in quantum Fermi liquids. 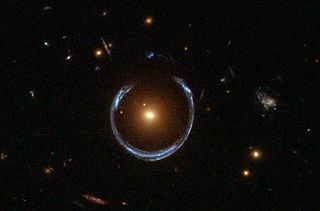 In the theory of Lorentzian manifolds, spherically symmetric spacetimes admit a family of nested round spheres. In such a spacetime, a particularly important kind of coordinate chart is the Schwarzschild chart, a kind of polar spherical coordinate chart on a static and spherically symmetric spacetime, which is adapted to these nested round spheres. The defining characteristic of Schwarzschild chart is that the radial coordinate possesses a natural geometric interpretation in terms of the surface area and Gaussian curvature of each sphere. However, radial distances and angles are not accurately represented.

In mathematics and theoretical physics, and especially gauge theory, the deformed Hermitian Yang–Mills (dHYM) equation is a differential equation describing the equations of motion for a D-brane in the B-model of string theory. The equation was derived by Mariño-Minasian-Moore-Strominger in the case of Abelian gauge group, and by Leung-Yau-Zaslow using mirror symmetry from the corresponding equations of motion for D-branes in the A-model of string theory.