A member of the Merovingian dynasty, Clovis was the son of King Theuderic III and Queen Chrodochild. [2] He was born around 677 [3] or possibly towards 682. [4] He succeeded his father as the sole ruler of the Franks upon the latter's death in 690 or 691. [5] He ruled an undivided kingdom including Austrasia, Burgundy and Neustria. [6] According to the Annals of Metz , a pro-Pippinid source, he was appointed by Pippin of Herstal, the mayor of the palace of Austrasia, and reigned four years. [7]

Clovis was a minor at his accession, and real power was in Pippin's hands. [3] [8] His minority, coming as it did on the heels of his father's efforts to strengthen royal power, was an important factor in the decline of the Merovingian dynasty. [9] Clovis resided primarily in Compiègne (the traditional site of the Marchfield) and Montmacq. [10]

Nine of Clovis's charters have been edited and published. Four of them are records of placita (public judicial hearings) held in the king's presence. Despite the rise of Pippin and his family, which is a major theme of the Annals of Metz, the royal court was still important in Clovis's reign. During a placitum in Valenciennes in 693, Clovis was attended by twelve bishops, twelve viri illustres (including Nordebert, the Neustrian mayor of the palace), nine counts and numerous other officials. [8] The future Neustrian mayor of the palace Ragamfred started out as a domesticus under Clovis. Warno, the Neustrian comes palatii of Chilperic II, also began his career at the court of Clovis. [11]

In 692, Clovis confirmed for the Abbey of Saint-Denis the right to collect certain tolls in Marseille, a right which it had been granted by Dagobert I. [12] [13] He also granted to the Abbey of Saint-Médard the nearby house that had been the primary residence of the former mayor of the palace, Ebroin, in Soissons. [14]

The anonymous continuator of the Chronicle of Fredegar devotes two sentences to Clovis IV: "King Theuderic died ... and his little son Clovis was chosen to succeed him as king. But it was not long before King Clovis fell ill and died, having reigned four years." [15] He died in either 694 [2] or 695. [5] He was succeeded by his brother, Childebert III. Clovis does not appear to have made much of an impression on his contemporaries; his brother was more highly regarded. [5] 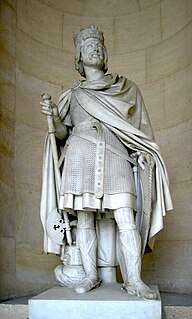 Charles Martel was a Frankish statesman and military leader who, as Duke and Prince of the Franks and Mayor of the Palace, was the de facto ruler of Francia from 718 until his death. He was a son of the Frankish statesman Pepin of Herstal and Pepin's mistress, a noblewoman named Alpaida. Charles, also known as “The Hammer”, successfully asserted his claims to power as successor to his father as the power behind the throne in Frankish politics. Continuing and building on his father's work, he restored centralized government in Francia and began the series of military campaigns that re-established the Franks as the undisputed masters of all Gaul. According to a near-contemporary source, the Liber Historiae Francorum, Charles was "a warrior who was uncommonly [...] effective in battle".

Pepin II, commonly known as Pepin of Herstal, was a Frankish statesman and military leader who de facto ruled Francia as the Mayor of the Palace from 680 until his death. He took the title Duke and Prince of the Franks upon his conquest of all the Frankish realms. 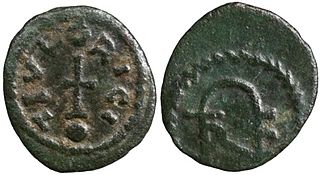 Theuderic I was the Merovingian king of Metz, Rheims, or Austrasia—as it is variously called—from 511 to 533 or 534. 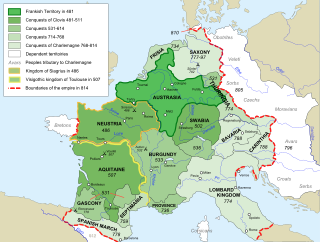 Austrasia was a territory which formed the northeastern section of the Merovingian Kingdom of the Franks during the 6th to 8th centuries. It was centred on the Meuse, Middle Rhine and the Moselle rivers, and was the original territory of the Franks, including both the so-called Salians and Rhineland Franks, which Clovis I conquered after first taking control of the bordering part of Roman Gaul, now northern France, which is sometimes described in this period as Neustria. 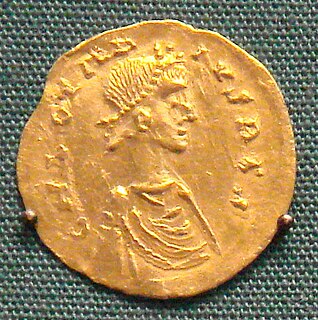 Chlothar II, called the Great or the Young, was king of Neustria and king of the Franks, and the son of Chilperic I and his third wife, Fredegund. He started his reign as an infant under the regency of his mother, who was in an uneasy alliance with Chlothar's uncle King Guntram of Burgundy, who died in 592. Chlothar took power upon the death of his mother in 597; though rich, Neustria was one of the smallest portions of Francia. He continued his mother's feud with Queen Brunhilda of Austrasia with equal viciousness and bloodshed, finally achieving her execution in an especially brutal manner in 613, after winning the battle that enabled Chlothar to unite Francia under his rule. Like his father, he built up his territories by seizing lands after the deaths of other kings. 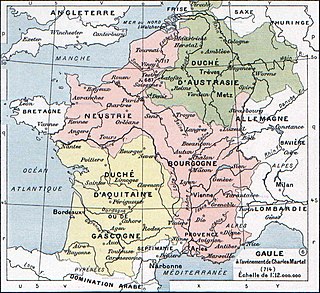 Neustria was the western part of the Kingdom of the Franks.

The Carolingian dynasty was a Frankish noble family founded by Charles Martel with origins in the Arnulfing and Pippinid clans of the 7th century AD. The dynasty consolidated its power in the 8th century, eventually making the offices of mayor of the palace and dux et princeps Francorum hereditary, and becoming the de facto rulers of the Franks as the real powers behind the Merovingian throne. In 751 the Merovingian dynasty which had ruled the Germanic Franks was overthrown with the consent of the Papacy and the aristocracy, and Pepin the Short, son of Martel, was crowned King of the Franks. The Carolingian dynasty reached its peak in 800 with the crowning of Charlemagne as the first Emperor of Romans in the West in over three centuries. His death in 814 began an extended period of fragmentation of the Carolingian Empire and decline that would eventually lead to the evolution of the Kingdom of France and the Holy Roman Empire.

Chlothar III was the eldest son of Clovis II, king of Neustria and Burgundy, and his queen Balthild. When Clovis died in 657, Chlothar succeeded him under the regency of his mother. Only a month beforehand, according to the near-contemporary Life of Eligius by the courtier Audoin (bishop) of Rouen, Saint Eligius had prophesied the death of Clovis, Balthild's downfall, and Chlothar's short reign.

Childeric III was King of Francia from 743 until he was deposed by Pope Zachary in March 751 at the instigation of Pepin the Short. Although his parentage is uncertain, he is considered the last Frankish king from the Merovingian dynasty. Once Childeric was deposed, Pepin the Short, who was the father of emperor Charlemagne, was crowned king, initiating the Carolingian dynasty.

Francia, also called the Kingdom of the Franks, Frankland, or Frankish Empire, was the largest post-Roman barbarian kingdom in Western Europe. It was ruled by the Franks during Late Antiquity and the Early Middle Ages. After the Treaty of Verdun in 843, West Francia became the predecessor of France, and East Francia became that of Germany. Francia was among the last surviving Germanic kingdoms from the Migration Period era before its partition in 843.

Dagobert II was the Merovingian king of the Franks ruling in Austrasia from 675 or 676 until his death. He is one of the more obscure Merovingians. He has been considered a martyr since at least the ninth century. 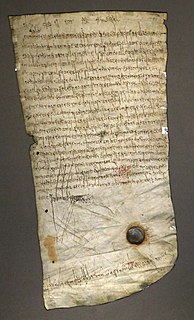 Theuderic III was the king of Neustria on two occasions and king of Austrasia from 679 to his death in 691. Thus, he was the king of all the Franks from 679. The son of Clovis II and Balthild, he has been described as a puppet – a roi fainéant – of Ebroin, the Mayor of the Palace, who may have even appointed him without the support of the nobles.

Liber Historiae Francorum is a chronicle written anonymously during the 8th century. The first sections served as a secondary source for early Franks in the time of Marcomer, giving a short breviarum of events until the time of the late Merovingians. The subsequent sections of the chronicle are important primary sources for the contemporaneous history. They provide an account of the Pippinid family in Austrasia before they became the most famous Carolingians.

Chlothar IV was the king of Austrasia from 717 until his death. He was a member of the Merovingian dynasty, and was installed by Charles Martel, a contender for the office of mayor of the palace, in opposition to Chilperic II, whose rule was thereby restricted to Neustria. This marked the first time since 679 that the kingdom of the Franks was divided. Following Chlothar's death, it was reunited under Chilperic.

The Battle of Tertry was an important engagement in Merovingian Gaul between the forces of Austrasia under Pepin II on one side and those of Neustria and Burgundy on the other. It took place in 687 at Tertry, Somme, and the battle is presented as an heroic account in the Annales mettenses priores. After achieving victory on the battlefield at Tertry, the Austrasians dictated the political future of the Neustrians.

The Battle of Lucofao was the decisive engagement of the civil war that afflicted the Frankish kingdoms during and after the reign of Dagobert II (676–79). In the battle, the Neustrian forces of Theuderic III and his majordomo Ebroin defeated the forces of Austrasia under the dukes Pippin and Martin.

The Battle of Autun was a pitched battle in 642 or 643, concluding a feud between Flaochad and Willebad, two magnates of the Merovingian kingdom of Burgundy. The battle is recounted in detail in the final chapter of the contemporary Chronicle of Fredegar and also in the biographies of saints Eligius of Noyon and Sigiramn. While Fredegar seems hostile to Willebad, the hagiographers are hostile to Flaochad. The anonymous author of Fredegar may have been an eyewitness.