Code Geass: Lelouch of the Re;surrection

Code Geass: Lelouch of the Resurrection (Japanese: コードギアス 復活のルルーシュ, Hepburn: Kōdo Giasu: Fukkatsu no Rurūshu) is a 2019 Japanese anime film by Sunrise. It premiered in Japan on February 9, 2019 and ran in over 120 theatres. [2] Based on the Code Geass anime series, the film takes place in the alternate universe depicted in the three-part, theatrical remake series that was released between 2017 and 2018 and serves as a direct sequel to their events. [3] [2] It is directed by Gorō Taniguchi, written by Ichirō Ōkouchi with music by Kōtarō Nakagawa and Hitomi Kuroishi, all of whom previously contributed to the TV series in the same respective roles. [4] The project of the film was announced on November 27, 2016, on its 10th anniversary event. [5]

The film has been licensed by Funimation [6] and it had a limited theatrical release in the United States and Canada on May 5, 2019. [7]

A year has passed since the events of the "Zero Requiem", a scheme Emperor Lelouch vi Britannia formulated to end conflict with his death, and Nunnally vi Britannia rules Britannia while aided by her bodyguard Suzaku Kururugi, who has taken the identity of Zero. Nunnally and Suzaku are in the middle of a goodwill visit to a desert nation when they are ambushed by a Knightmare squad; Suzaku is easily defeated and they are abducted. The two find themselves in the custody of Shalio and Shamna, the sibling rulers of the Kingdom of Zilkhistan which has suffered from the world peace crippling their primary export: mercenary soldiers. Shamna explains their plan to use Nunnally to access the collective unconsciousness within C's World to restore Zilkhistan's political might.

Suspecting Zilkhistan's involvement, Kallen Stadtfeld, Sayoko Shinozaki, and Lloyd Asplund infiltrate the country and run into C.C. and a physically resurrected but soulless Lelouch. C.C. explains that, after the Zero Requiem, their school friend Shirley Fenette smuggled Lelouch's corpse to her and that she resurrected Lelouch from the dead by reconstructing his corpse, but his memories and personality are trapped in the collective unconsciousness. The group launches an assault on a Zilkhistan prison, where they rescue Suzaku and discover an Aramu Gate, a portal to C's World. C.C. uses the portal to fully resurrect Lelouch. Lelouch once again dons the mantle of Zero and meets up with Britannian forces led by his half-sister Cornelia li Britannia and his former lieutenant Kaname Ohgi.

Lelouch's forces track Nunnally down and find her in a Zilkhistan temple. Lelouch infiltrates the temple and kills Shamna, but she activates her Geass and travels back six hours in the past, allowing her to perfectly predict Lelouch's actions. Lelouch uses his tactical prowess to deduce the mechanics of Shamna's Geass and knocks her out. He frees Nunnally, but learns that her mind has been transported into C's World. C.C. guides him into the collective unconsciousness, and he successfully rescues Nunnally. Suzaku kills Shalio in combat, destroying Shamna permanently. In the aftermath, Lelouch once again bequeaths the title of Zero to Suzaku and departs on a journey with C.C., [8] taking the alias L.L. as his idea of a marriage proposal. [9]

In a post-credits scene set in an undetermined future, L.L. and C.C. are shown standing over a mass grave in a forest, with L.L. stating he would take away the Geass of those who wield it without resolve. This post-credit scene served as the setup for the movie's picture drama where Lelouch and C.C. confronted a pirate and C.C. took away his Geass.

Jun Fukuyama is a Japanese voice actor and singer who played Lelouch Lamperouge in Code Geass, Koro-sensei in Assassination Classroom, Ichimatsu in Osomatsu-san, Yuta Togashi in Love, Chunibyo & Other Delusions, Hero in Maoyu, Misaki Yata in K, Kimihiro Watanuki in xxxHOLiC and Joker in Persona 5.

Kim Mai Guest is an American voice actress of European and Vietnamese descent who is known to speak fluent French and Italian. She is best known for her role as Mei Ling in Metal Gear.

Code Geass: Lelouch of the Rebellion, often referred to simply as Code Geass, is a Japanese anime television series produced by Sunrise. It was directed by Gorō Taniguchi and written by Ichirō Ōkouchi, with original character designs by Clamp. Set in an alternate timeline, the series follows the exiled prince Lelouch vi Britannia, who obtains the "power of absolute obedience" from a mysterious woman named C.C. Using this supernatural power, known as Geass, he leads a rebellion against the rule of the Holy Britannian Empire, commanding a series of mecha battles.

Gorō Taniguchi is a Japanese anime director, writer, producer and storyboard artist, who is among Sunrise's noted directors. He was born in Nisshin, Aichi, Japan.

Ichirō Ōkouchi is a Japanese screenwriter and novelist. He is a graduate of Waseda University, School of Human Sciences.

Kallen Stadtfeld is a fictional character in the Sunrise anime series Code Geass: Lelouch of the Rebellion. In the series, she is legally known by "Kallen Stadtfeld" at school, but prefers her mother's maiden surname, using Kallen Kozuki during her revolutionary activities. Her voice actress Ami Koshimizu won "Best Actress in a Supporting Role" for her role as Kallen at the first Seiyu Awards in 2007. Kallen was awarded 8th place in the 29th Anime Grand Prix, then 17th and 16th, respectively, in the following two. 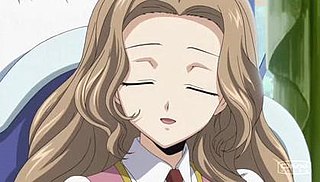 Nunnally Lamperouge is a fictional character in the Sunrise anime series, Code Geass: Lelouch of the Rebellion. She is Lelouch Lamperouge's disabled younger sister. Her real name is Nunnally vi Britannia. Her voice actress is Kaori Nazuka. A spin-off manga entitled Nightmare of Nunnally focuses on her, depicting what would have happened if Nunnally had received a Geass along with Lelouch.

Kōtarō Nakagawa is a Japanese composer and arranger. He is noted for composing the soundtracks for several anime series, including the Gorō Taniguchi-directed productions s-CRY-ed, Planetes, Gun Sword, and Code Geass. He provided the music for many of the Kamen Rider and Super Sentai tokusatsu shows and films.

Lelouch vi Britannia, whose alias is Lelouch Lamperouge, is the title character and leading antihero of the Sunrise anime series Code Geass: Lelouch of the Rebellion. In the series, Lelouch is a former prince from the superpower Britannia who is given the power of the "Geass" by a witch known as C.C. Using the Geass and his genius-level intellect, Lelouch becomes the leader of the resistance movement known as The Black Knights under his alter ego Zero (ゼロ) to destroy the Holy Britannian Empire, an imperial monarchy that has been conquering various countries under control from his father. 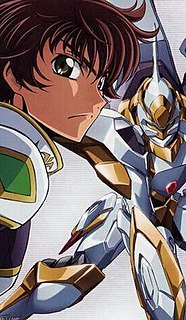 Suzaku Kururugi is a fictional character in the Sunrise anime series Code Geass: Lelouch of the Rebellion. He is voiced by Takahiro Sakurai and his younger self is voiced by Akeno Watanabe. 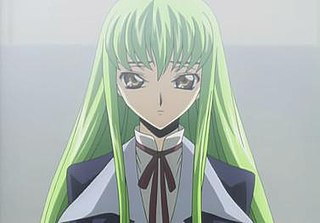 C.C. is the pseudonym of a fictional character in the Code Geass: Lelouch of the Rebellion franchise by Sunrise. With her real name kept from the audience, she first appeared in the 2006 initial anime season, and afterwards has appeared in many manga, OVA, anime, and video game spinoffs. She is voiced by Yukana.

Jared Scott Gilmore is an American actor. He is best known for his role in the series Once Upon a Time as Henry Mills.