Coenraad Jacob Temminck was born on 31 March 1778 in Amsterdam in the Dutch Republic. From his father, Jacob Temminck, who was treasurer of the Dutch East India Company with links to numerous travellers and collectors, he inherited a large collection of bird specimens. His father was a good friend of Francois Levaillant who also guided Coenraad.

Temminck, in collaboration with Heinrich Kuhl, is the author of descriptions of parrots, including the rosella Platycercus icterotis . [4] A tailless mutant of a junglefowl Gallus lafayettii was described in 1807 by Temminck, which in 1868 the English naturalist Charles Darwin incorrectly denied existed. [5]

A large number of animals were named for Temminck in the 19th century. Among those still in use are: [6] 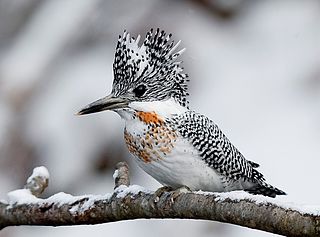 The crested kingfisher is a very large kingfisher that is native to parts of southern Asia, stretching eastwards from the Indian Subcontinent towards Japan. It forms a species complex with the other three Megaceryle species. 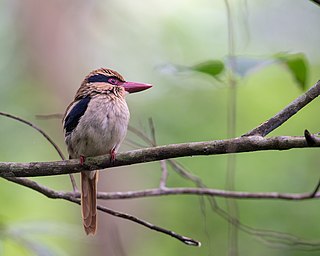 The lilac kingfisher or Celebes flat-billed kingfisher is a resident breeding bird in the lowlands of the Indonesia island of Sulawesi and the neighbouring Sangihe and Talaud Islands. It is the only member of the genus Cittura. 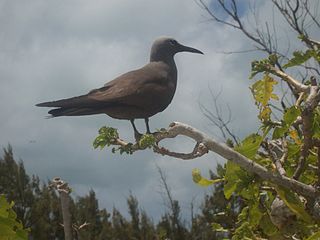 The lesser noddy, also known as the sooty noddy, is a seabird in the family Laridae. It is found near the coastlines of Comoros, Kenya, India, Maldives, Mauritius, Seychelles, Sri Lanka and United Arab Emirates. 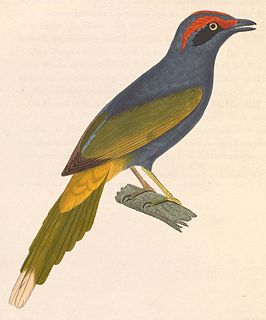 The fiery-browed starling or fiery-browed myna is a species of starling in the family Sturnidae. It is monotypic within the genus Enodes. Distinguished by a reddish-orange stripe over the eye, it is endemic to the Indonesian island of Sulawesi, mainly living in humid highland forest. 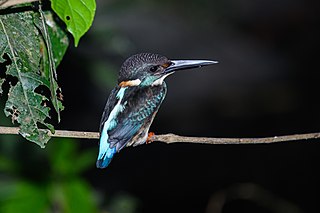 The ferruginous antbird is an insectivorous bird in the antbird family Thamnophilidae. It is endemic to Atlantic Forest in south-eastern Brazil. It was formerly considered conspecific with the very similar Bertoni's antbird.

The dusky-tailed antbird is an insectivorous bird in the antbird family Thamnophilidae. It is found in southeast Brazil, southern Paraguay, and northeast Argentina . Its natural habitat is subtropical or tropical moist lowland forest. 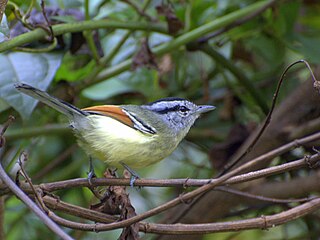 Hylophilus is a genus of bird in the family Vireonidae. Established by Coenraad Jacob Temminck in 1822, it contains the following species as of 2014:

The elegant pitta is a species of passerine bird in the pitta family Pittidae. It is endemic to Indonesia, where it is found in the Lesser Sunda Islands and Moluccas.

The crescent-chested babbler is a babbler species in the family Timaliidae and is native to the Indonesian islands of Java and Bali. It inhabits subtropical or tropical moist lowland forest, montane forest and shrubland. It is listed as Least Concern on the IUCN Red List.

The cinereous antshrike is an insectivorous bird in the antbird family Thamnophilidae. The term cinereous describes its colouration. It is found in Bolivia, Brazil, Colombia, Ecuador, French Guiana, Guyana, Peru, Suriname, and Venezuela. Its natural habitat is subtropical or tropical moist lowland forests.

The orange-backed woodpecker is a bird in the woodpecker family Picidae. It is found in southern Thailand, Malaya, Sarawak and Sabah in Malaysia, Brunei, Sumatra and Java. It is placed in its own monotypic genus Reinwardtipicus.

This article provides a summary of significant events in 1820 in birding and ornithology. Notable occurrences in 1820 include the first description of the yellow-legged tinamou, and the commencement of ornithologist William John Swainson's Zoological Illustrations, a work including illustrations of many birds. 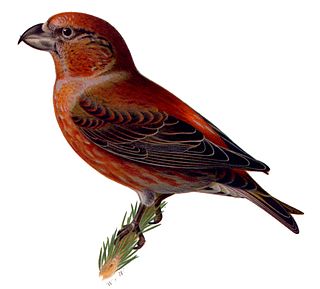