Coicent (コイ☆セント, Koi☆Sento) is a 2000 (copyright date) Japanese CG anime original video animation release. The OVA was written and directed by Shuhei Morita and produced by Sunrise. [1] This story takes place in 2710, when a boy named Shinichi follows a white deer and meets a strange girl. It is licensed in North America by Sentai Filmworks, and was released alongside another Sunrise produced OVA Five Numbers! on DVD and Blu-ray on November 22, 2011. [2]

In 2710, a boy named Shinichi is on a school field trip to a rebuilt 21st century version of the city Nara. When he wanders from his class, he spots a talking white deer and it steals his bag. Shinichi follows the deer and sees a strange girl named Toto and falls in love with her. She is being pursued by two brothers and they try to get away from them.

Toto (トト)
Voiced by: Minako Kotobuki (Japanese); Luci Christian (English) [1] [3]
A mysterious girl who is seen riding the White Deer. She is being chased by the two brothers. 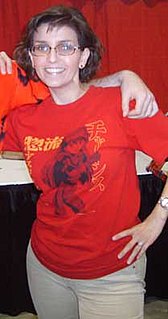 Cynthia Martinez is an American voice actress who works for ADV Films and Seraphim Digital/Sentai Filmworks. Her first role was that of Lina Inverse in the Slayers movies and OVAs. Besides Lina, she is also known for the lead roles of Mayu from Elfen Lied, Illyasviel von Einzbern from the Fate/kaleid liner Prisma Illya series, Tami Nishimikado from Hanayamata and Sora Naegino from Kaleido Star, and Mikako Nagamine from Makoto Shinkai's Voices of a Distant Star. She was announced as a guest of honor for the Ani-Jam convention in 2013.

Brittney Marie Karbowski is an American voice actress who has voiced in a number of English-language versions of Japanese anime series for ADV Films, Funimation and Sentai Filmworks, most notably, Black Star in Soul Eater. She also voices as Wendy Marvell in Fairy Tail, Mikoto Misaka in A Certain Magical Index and its spinoff, A Certain Scientific Railgun, and Yuri Nakamura in Angel Beats!. 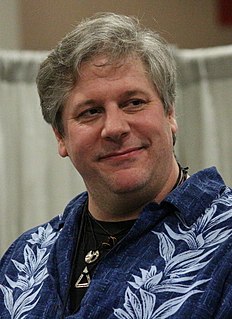 Mark X. Laskowski is an American voice actor. He is known for many roles in anime dubs for ADV Films and Seraphim Digital/Sentai Filmworks, such as Shinpachi Shimura from Gintama the Movie, Kobungo Inuta from Hakkenden, K from Puni Puni Poemi, Flint from the Bodacious Space Pirates movie, and Tweedledim from the Mardock Scramble movies.

Gatchaman (ガッチャマン) is a three-part original video animation (OVA) based on the popular 1970s anime Science Ninja Team Gatchaman. It was released in Japan and the United States during the mid-1990s. This version of Gatchaman is set in the year 2066 where the evil leader of the nation of Hontwall is threatening to take over the planet. Scientists from the International Science Organization are disappearing and only five teenage heroes, the Science Ninja team, can stop the disaster. The OVAs were licensed by Urban Vision through Harmony Gold USA and were released on VHS and DVD. At Anime Boston 2013, Sentai Filmworks had announced that they have rescued the OVA series along with the original 1970s series for a DVD re-release in October. The series was made available for streaming through Crunchyroll.

Seraphim Digital is an American post-production studio located in Houston, Texas. It was founded as Industrial Smoke & Mirrors, the in-house studio to ADV Films. It was renamed ADV Studios in 2005. Afterwards in 2006, when ADV began offering its services to other companies' the studio was renamed called Amusement Park Media before it was sold off by A.D. Vision. It was then renamed Seraphim Digital. The studio is best known for producing English language dubs of Japanese anime series and live action Japanese films released by ADV Films, Sentai Filmworks, Switchblade Pictures and Maiden Japan. Other notable clients include Warner Bros., Sony Pictures, Microsoft, PBS and Toei Animation.

A Channel, is a Japanese four-panel comic strip by bb Kuroda. It was first serialized in the seinen manga magazine Manga Time Kirara Carat on December 2008 issue, published by Houbunsha. A prequel manga series, also by Kuroda, launched in Manga Time Kirara Carino from January 2012. An anime adaptation by Studio Gokumi aired in Japan between April 8, 2011 and June 24, 2011. An original video animation, A Channel +smile, was released on March 21, 2012. 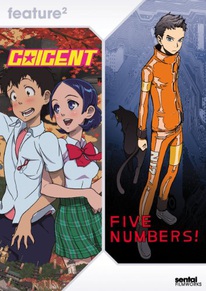 Five Numbers! is a 2011 Japanese anime original video animation release. The OVA was directed by Hiroaki Ando, written by Dai Satō and produced by Sunrise. It is licensed in North America by Sentai Filmworks, it was released alongside another Sunrise OVA, Coicent, on DVD and Blu-ray on November 22, 2011 on the same disc.

Busou Shinki is a 12-episode mecha, action/adventure, anime television series produced by Eight Bit and broadcast on TBS in Japan in 2012. This TV series is based on the Busou Shinki franchise by Konami Digital Entertainment. Sentai Filmworks licensed the TV series for distribution in North America in 2012.

Beyond the Boundary is a Japanese light novel series written by Nagomu Torii, with illustrations by Tomoyo Kamoi. The work won an honorable mention in the Kyoto Animation Award competition in 2011. Kyoto Animation has published three volumes since June 2012. An anime television series adaptation, produced by Kyoto Animation, aired in Japan between October and December 2013. An original video animation episode was released in July 2014. A two-part anime film project premiered in March and April 2015.

Flying Witch is a Japanese manga series written and illustrated by Chihiro Ishizuka. It has been serialized in Kodansha's Bessatsu Shōnen Magazine since August 2012, with its chapters collected in nine tankōbon volumes as of June 2020. An anime television series adaptation by J.C.Staff aired between April and June 2016. 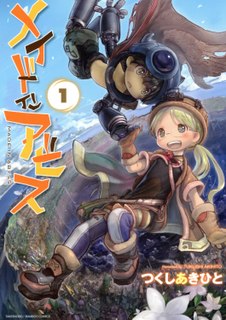 Made in Abyss is a Japanese manga series written and illustrated by Akihito Tsukushi. It has been serialized online in Takeshobo's digital publication Web Comic Gamma since 2012 and has been collected into nine tankōbon volumes. An anime television series adaptation by Kinema Citrus aired its first season from July 7 to September 29, 2017. A sequel film premiered in Japan on January 17, 2020. It was scheduled to be released in U.S. on April 11, 2020, but was postponed due to the COVID-19 pandemic.