The Cold Spring and Inscription Rock Historic District is a 2-acre (0.81 ha) historic district in Cimarron County, Oklahoma, near Boise City, Oklahoma that was listed on the U.S. National Register of Historic Places in 1994. It is associated with NPS Master Plan #122. The district includes a landscape; it includes two contributing buildings and two other contributing sites. [1] 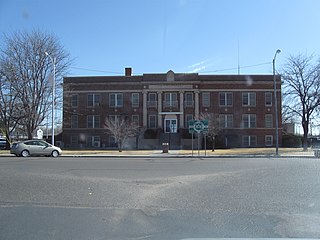 Cimarron County is the westernmost county in the U.S. state of Oklahoma. As of the 2010 census, the population was 2,475, making it the least-populous county in Oklahoma. Its county seat is Boise City.

It includes two significant features: Inscription Rock, on the Cimarron Cutoff of the Santa Fe Trail, a rock outcropping with travelers' names carved upon it, and also the Cold Springs Creek Camp Site. The camp site includes a stone building that served as a stagecoach station and a stone spring house. [2]

The Santa Fe Trail was a 19th-century transportation route through central North America that connected Franklin, Missouri with Santa Fe, New Mexico. Pioneered in 1821 by William Becknell, who departed from the Boonslick region along the Missouri River, the trail served as a vital commercial highway until the introduction of the railroad to Santa Fe in 1880. Santa Fe was near the end of the El Camino Real de Tierra Adentro, which carried trade from Mexico City.

Chandler is a city in and the county seat of Lincoln County, Oklahoma, United States. and is part of the Oklahoma City Metropolitan Area. The population was 3,100 at the 2010 census, an increase from 2,842 at the 2000 census. 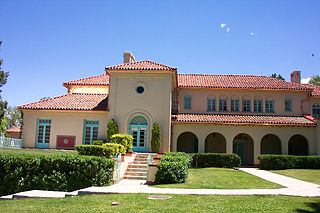 Wagon Bed Spring, also known historically as the Lower Spring or Lower Cimarron Spring, is a historic former spring in Grant County, Kansas, United States. It is located about 12 miles (19 km) south of Ulysses, on the west side of United States Route 270. /> In the 19th century it was an important watering spot on the Cimarron Cutoff of the Santa Fe Trail, where migrants on the trail often camped. The spring is now dry, primarily due to irrigation lowering the water table in the area. It was declared a National Historic Landmark in 1961.

Camp Nichols, also known as Fort Nichols or Camp Nichols Ranch, was a short-lived historic fortification located in present-day Cimarron County, Oklahoma, about 3 miles (4.8 km) northwest of the community of Wheeless, Oklahoma. It was built by New Mexico and California volunteers under the command of Col. Kit Carson to protect travelers on the most dangerous part of the Cimarron Cut-off of the Santa Fe Trail from raids by the Kiowa and Comanche Indians. Established in May 1865 and abandoned in September 1865, it was the only manmade structure along the Cimarron Cut-off while it was an active route. It is believed to have been named for Captain Charles P. Nichols of the First California Cavalry.

This is a list of the National Register of Historic Places listings in Cimarron County, Oklahoma.

Camp Dudley Road Historic District is a national historic district located at Westport, in Essex County, New York. The district contains 131 contributing buildings, one contributing site, and one contributing structure. It consists of an agricultural landscape and includes late-19th and early-20th century seasonal developments. Among the buildings are vernacular farmhouses in a variety of styles, barn complexes, a stone schoolhouse built in 1816, Skenewood Estate, the Stable Inn properties, Germain property, "Kenjockety," and Barber's Point Lighthouse. Camp Dudley, the oldest continuing boy's camp is located on a 250-acre (1.0 km2) parcel in the southern part of the district. 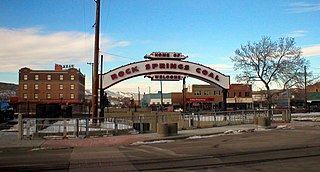 The Downtown Rock Springs Historic District is a 15.97-acre (6.46 ha) historic district that was listed on the National Register of Historic Places in 1994. It is roughly bounded by K, 4th, C, 2nd, A, and 5th Streets in downtown Rock Springs, Wyoming. 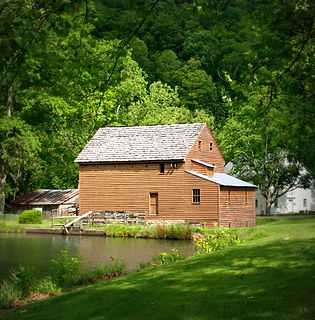 Jackson's Mill State 4-H Camp Historic District, also known as West Virginia University Jackson's Mill, is a historic 4-H camp and national historic district near Weston, Lewis County, West Virginia. The district includes 23 contributing buildings, 4 contributing sites, 4 contributing structures, and 2 contributing objects. The camp was established in 1921 as the first statewide 4-H camp in the United States. The district includes buildings related to the site's inception as a homestead and agricultural area as well as its current manifestation as a youth camp facility and conference center. 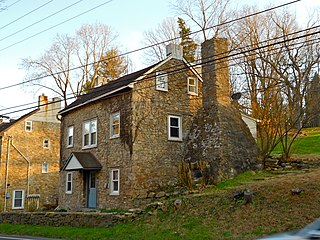 Spring Valley Historic District, also known as Mechanic's Valley, is a national historic district located in Buckingham Township, Bucks County, Pennsylvania. The district includes 32 contributing buildings, 1 contributing site, and 2 contributing structures in the crossroads village of Spring Valley. They include a variety of residential, commercial, and institutional buildings, some of which are representative of the vernacular Georgian and Federal styles. The residential buildings are predominantly 2 1/2-story, stuccoed stone structures, some of which date to mid-18th century. Notable buildings include the Upper Mill or Spring Valley Mill, Lower Mill, blacksmith and wheelwright shop, cooperage, store, and two inns—the "Neff's Tavern" and Temperance Inn. The structures are the Spring Valley Mill Dam and a stone arch bridge.

The Autograph Rock Historic District, in Cimarron County, Oklahoma near Boise City, Oklahoma, is a 58.5-acre (23.7 ha) historic district that was listed on the National Register of Historic Places in 1994. It is associated with NPS Master Plan #123. It includes five contributing sites.

The Red Ghost Cave Archeological District in Cimarron County, Oklahoma near Kenton is a 10-acre (4.0 ha) archeological site that was listed on the National Register of Historic Places in 1978. It includes a prehistoric camp among three contributing sites in the district, and includes what has also been known as Ci-39 and Ci-68.

The Cedar Breaks Archeological District, in Cimarron County, Oklahoma near Felt, is a 160-acre (65 ha) archeological site that was listed on the U.S. National Register of Historic Places in 1978. It includes three contributing sites denoted Ci-193, Ci-194 and Ci-195; it includes rock art and at least one camp site area. It was listed on the National Register for its potential to yield information in the future.

Rockbridge Alum Springs Historic District, also known as Jordan Alum Springs, and now known as Rockbridge Alum Springs - A Young Life Camp, is a historic 19th-century resort complex and national historic district near California, Rockbridge County, Virginia, United States. The district encompasses 16 contributing buildings, 10 contributing sites, and 4 contributing structures dating primarily to the 1850s, and associated with the operations of the Rockbridge Alum Springs, a popular 19th- and early-20th century mountain resort. The buildings are the barroom, store/post office, Montgomery Hall, the Gothic Building, the Alum Springs Pavilion, two cottages of Baltimore Row, the Ladies Hotel, four cottages of Kentucky Row, Jordan's House, a servant's quarters, a slave quarters, and a storehouse. The remaining structures are a well and the stone spring chambers and gazebo and bandstand of the Jordan Alum Springs. The sites are primarily those of demolished cottages. It is one of the best-preserved antebellum springs resort complexes in Virginia. The resort remained in operation until 1941. It is currently owned and operated by Young Life, a non-denominational Christian youth organization, and has been operated as a year-round campground since 1992. 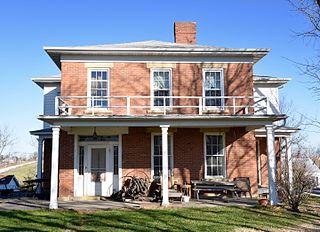